Takashimaya gambles on the power of the bow in Vietnam 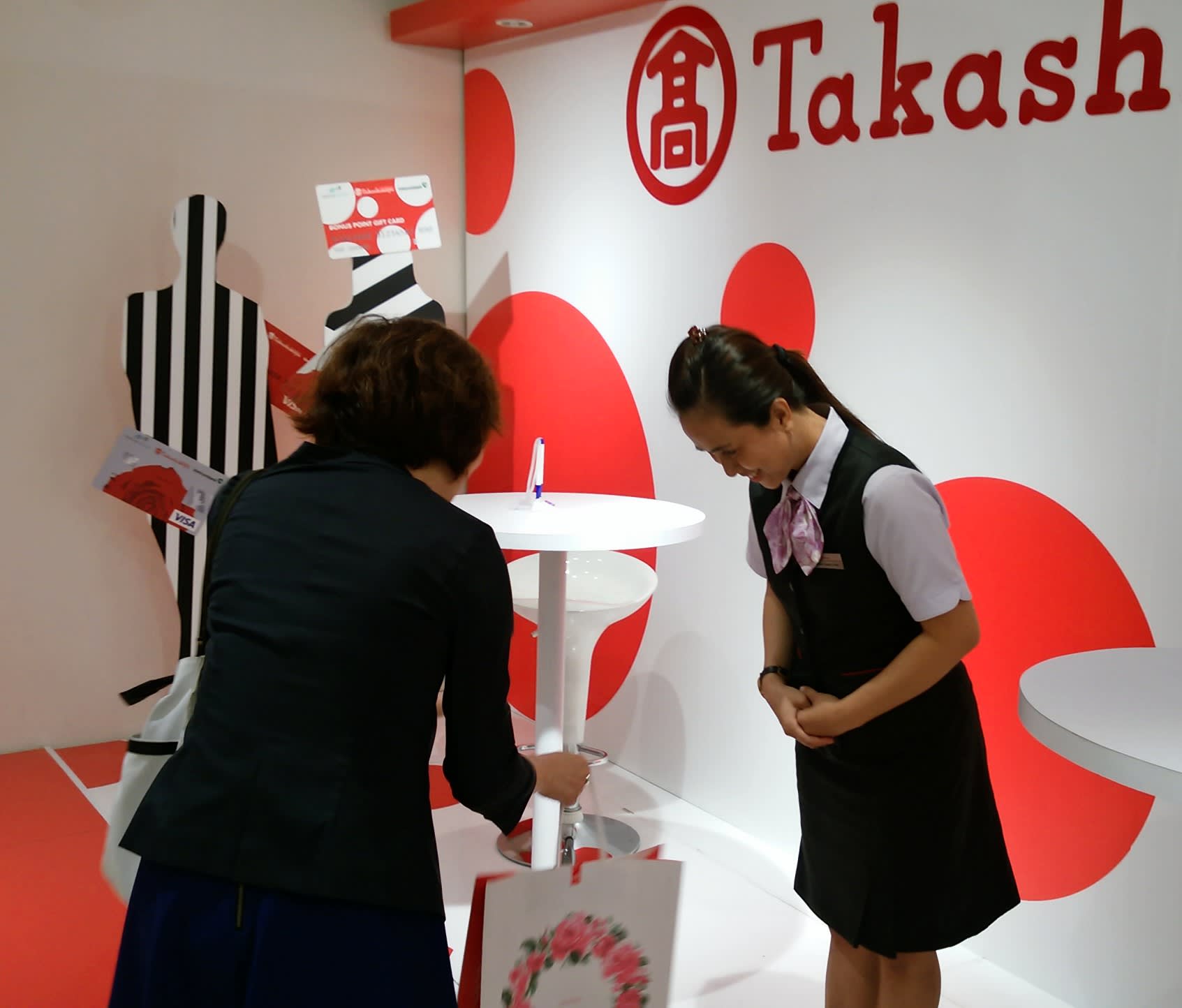 A customer gets a taste of Japanese-style service at Takashimaya's new store in Ho Chi Minh City.

HANOI -- Takashimaya, a department store operator that traces its roots back 185 years, is hoping to use its brand power and Japanese-style hospitality to win over shoppers in Vietnam, where customer needs are not always a top priority among retailers.

On July 30, the company opened a store in central Ho Chi Minh City, becoming the first Japanese department store operator to set up shop in the Southeast Asian country.

While Takashimaya is banking on the appeal of Japanese goods and the allure of the depachika -- the basement salesfloor found in most Japanese department stores -- what it really expects to keep people coming back is its renowned customer service.

Part of its push to better serve customers includes a ban on the use of smartphones by employees. The move was not well-received, with particularly fierce opposition coming from a Vietnamese employee-education official who warned that workers would quit if denied their phones.

In Vietnam, employees are typically allowed to use their smartphones during work hours, ostensibly because of the shortage of fixed-line phones. But many people simply use their phones to play games or browse social media sites. Takashimaya's store is in a central location of Ho Chi Minh City.

The education official eventually dropped her opposition after observing employees at a Takashimaya store in Japan. She noted that not having the distraction of a phone enabled them to fully concentrate on the customers.

The quality of customer service is generally low in Vietnam. That is partly because the service industry is still in its infancy: Department stores, shopping centers and other commercial facilities have emerged only in the past decade. Another reason is the simple fact that as a communist country, Vietnam's priorities have been elsewhere.

Takashimaya decided to start by changing their service for the customers.

The company trained its employees to bow politely to all customers, and view them as important regardless of whether they buy anything.

Takashimaya has the bow down to a science, honed by nearly a century of practice. When addressing a customer with the words "welcome" or "thank you," employees place one hand atop the other in front of the bellybutton then bow at a 30-degree angle. For wordless greetings, the angle is halved to 15 degrees. While bowing, furthermore, employees do not look the customer in the eye, but rather focus on a spot on the floor 2 meters in front of the customer.

The smartphone ban was not the only source of employee pushback. Many of the 180 workers did not like the idea of wrapping goods in paper before handing them back to customers, likening it to the art of origami and saying it was too difficult to learn.

But a visiting Takashimaya executive stressed to them the importance of wrapping goods purchased as gifts, saying it is a way of showing respect for the recipients. Now, almost all employees at the Ho Chi Minh City store are adept at wrapping products.

Even the way the store is laid out is designed to impart a sense of hospitality, although it may be too subtle for the customer to notice. For example, the aisles are 2.4 meters wide on average, compared with about 1.5 meters for many commercial facilities in Vietnam, according to Takashimaya. Although the extra width eats into the retail space, the store says it makes it easier for customers to find what they are looking for.

"It's easy to see the individual goods here," a 40-year-old shopper said. "Vietnamese retailers tend to cram as many items as possible in the displays."

The store also has rooms for such activities as breast-feeding and applying makeup, even though they do not directly contribute to sales.

The Ho Chi Minh City outlet has also adopted the tone and tempo of in-store announcements at Takashimaya's store in Tokyo's Shinjuku district, which draws more foreign shoppers than any other shop in the chain. For Vietnamese shoppers who have been to a Takashimaya store in Japan, that detail adds to the sense that they are having a true Takashimaya experience.

Through years of research and experimentation with in-store announcements, Japanese department stores have worked out what types of voices are the most soothing and easiest to understand. Whereas most customer announcements in Vietnam simply provide information, those at Takashimaya's Ho Chi Minh City store are also designed to improve the overall ambiance.

Takashimaya's entry into Vietnam is part of a growing trend that has seen other Japanese retailers move into the market, including Aeon and FamilyMart. And while most Japanese stores tend to place a premium on customer service, Takashimaya may be best placed to improve the overall quality of retail services in Vietnam.

Although Takashimaya is aiming high in Vietnam, department stores there are struggling. A significant chunk of the population remains poor, putting high-end goods far out of the reach of most. Players such as Lotte Department Store of South Korea, Parkson of Malaysia and Vietnam's state-run Trang Tien Plaza are all finding success elusive there.

Still, Takashimaya took a 6 billion yen ($58.6 million) gamble on the Vietnamese store. "I cannot say when it will climb into the black," Takashimaya President Shigeru Kimoto said.

In Vietnam, people often visit stores just to browse, not buy. To change this, Aeon, which has four outlets in Vietnam, slashed prices at the fourth outlet. Retailers seeking to succeed there may need to follow Aeon's lead and make more products affordable for the average person.

Location is also key in determining whether a department store will succeed. That is why Takashimaya opened its outlet in a central part of Ho Chi Minh City that is slated to get a subway connection in the future.