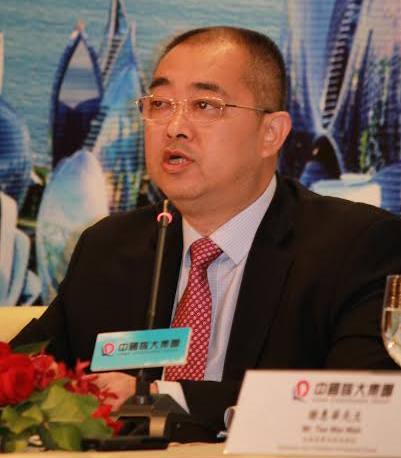 HONG KONG -- Takeovers in the real estate market would become more common as industry consolidation gains pace, according to the chief of China Evergrande Group, a Guangzhou-based homebuilder entangled in a proxy fight over top developer China Vanke.

Xia said that the aggregate market share of the 10 dominant developers in China would grow up to 20% by the end of this year from 17% last year. "Such concentration will only intensify," said Xia, suggesting the development would offer massive opportunities for the larger players in the market.

"Evergrande, Vanke, China Overseas Land & Investment, and Poly Real Estate will all see pleasant growth for the simple reason of deepening market concentration," added Xia, who pointed out that struggling developers, usually operating on a smaller scale, would have little choice but to sell their projects to larger developers.

Xia made those remarks at the company's briefing on its financial results for the first half of 2016. Founder and Chairman Xu Jiayin was absent as he was attending the Chinese People's Political Consultative Conference in Beijing, according to the company.

Xia declined to comment on Evergrande's aggressive buildup of equity interest in rival Vanke lately, except to say the company was using cash generated from sales to acquire Vanke's shares.

In the two weeks to Aug. 16, the debt-ridden company spent 14.56 billion yuan ($2.18 billion) to seize a 6.82% stake in Vanke on the Shenzhen market, making it Vanke's third largest shareholder. Local media reports claimed the move was a "political" mission backed by China Insurance Regulatory Commission for Xu to eventually obtain 51% of Vanke's shares at all costs.

"It's a sensitive issue," said Xia, referring to Evergrande's headline-grabbing maneuver. He emphasized that the company preferred to disclose its actions related to Vanke through corporate filings.

The company reported that net profit plunged 78.6% to 2.02 billion yuan for the six months ended June from a year ago.

The big fall was in spite of a 62.8% jump in contracted sales to 141.78 billion yuan in the period, prompting the company to revise its full-year sales target to 300 million yuan, up 50% from the original goal set at the beginning of the year.

The key drag was the decline in fair value in the company's equity investments, which deteriorated from a gain of 2.48 billion yuan a year earlier to a loss of 425 million yuan. Its marketing, administrative and operating expenses also grew. Finance costs, in particular, almost tripled to 1.78 billion yuan.

A frequent bond issuer, Evergrande tapped 10 billion yuan on the onshore market and $700 million in three-year senior notes in the first-half, according to its filings to the Hong Kong stock exchange. Its borrowings totaled 381.26 billion yuan as of June, up 28.4% from the previous year. Of that, 45.3% were short-term liabilities due within a year.

These debt instruments helped bump up Evergrande's liquidity to 212 billion yuan even though it only fetched 110 billion yuan from sales as of June.

Xia said the company would spend the cash mainly on mergers and acquisitions. "First and foremost we will acquire small-scaled developers in a bid to stock up high quality land," said Xia. "Second, we will also buy some promising financial institutions so that our group will become a full-license financial operation."

"We are eyeing brokerages and trusts companies for our next move," said Xia. Apart from running a life insurer, Evergrande has recently built up a 17.28% stake in Shengjing Bank based in the northeastern part of China, and became the lender's largest shareholder.

Ahead of the earnings report released on Tuesday evening, Evergrande's Hong Kong-listed shares ended 1.4% higher at 5.76 Hong Kong dollars, paring year-to-date losses to 15.5%. This compares to the benchmark Hang Seng Index which added less than 1% on the day and 5% so far this year.