Visitors to Japan apply for tax-exemption status at a duty-free counter for Lumine Est Shinjuku mall in Tokyo's Shinjuku Ward on May 11.

The move followed government easing of restrictions in April, allowing commercial facilities with many retail tenants, such as shopping centers, to operate the counters.

Previously, visitors to Japan were required to apply for tax exemptions at each individual store at shopping centers, a procedure cumbersome for both customers and stops. However, in department stores, they could apply for tax refunds on purchased goods in one place.

The new service allows overseas visitors to apply for tax exemptions on purchases made within the shopping center, even if purchases from one store do not reach the lower limit of 10,000 yen ($82.54) set for tax refunds on general goods including clothes. 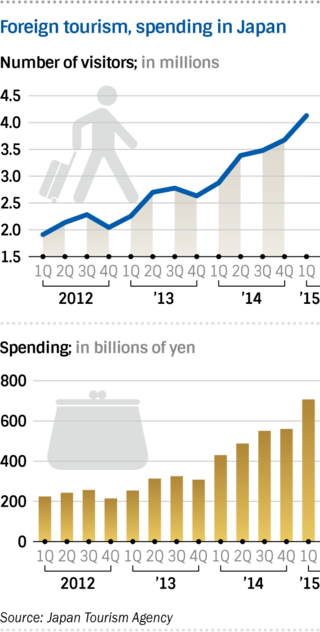 For shops, the new counters enable their operators to rely on the property manager to find staff able to speak languages other than Japanese and familiar with duty-free procedures. Also, the service can help lure more international customers inclined to buy less.

Lumine set up collective duty-free counters at its five major malls in the Tokyo metropolitan area on Monday. Lumine Est Shinjuku in Tokyo's Shinjuku Ward has two counters, one in the basement and one on the sixth floor. The mall employs English and Chinese speakers to work at the counters.

Mitsubishi Estate-Simon plans to introduce a collective duty-free counter at its Shisui Premium Outlets near Narita Airport sometime around autumn.

The new service is not just restricted to the Tokyo area. Fukuoka Jisho, which operates Canal City Hakata shopping complex in Fukuoka, will start operating a counter this summer. The mall, which is near the Port of Hakata, is visited by many tourists from Asia. In fiscal 2014, the number of visitors to the complex arriving on cruise ships stood at 180,000, eight times more than fiscal 2013.

Commercial facility operators Mitsui Fudosan and Mori Building are also considering the service for some of their locations.

Aeon Mall has plans to establish collective duty-free counters at its three shopping centers, including one near Narita Airport. The company will spread the service to more locations because, as President Akio Yoshida says, the counters "will encourage consumption, including bulk buying."

Shimanami runs highway rest spots with restaurants and shops along the expressways connecting Onomichi in Hiroshima Prefecture and Imabari in Ehime Prefecture. The company is preparing to use the centralized tax reclaim service at its roadside rest areas after concluding that simplifying duty-free procedures will help boost business as international travelers visit regional areas more frequently.