NANJING, China -- The Chinese government is on a mission to make up a shortfall of hundreds of thousands of semiconductor engineers, as the country works up a voracious appetite for chips and spars with the U.S.

Globally, the tech industry faces a shortage of the microchips that power everything from smartphones to earphones to car sensors. It also lacks enough skilled talent to produce them, especially in China, which consumes about a quarter of the world's output.

A Chinese government study released in April found that an additional 230,000 engineers would be needed by 2022 to keep up with demand, on top of the 511,900 employed in the semiconductor sector in 2019.

One answer, the authorities hope, lies about 1,000 km south of Beijing.

Last October, a vocational institute called the Nanjing IC Training Base opened in Nanjing, Jiangsu Province. It is sponsored by the administrator of the Nanjing Jiangbei New Area, a national-level pilot zone for innovation. The training center is part of a government drive to convert a 788-sq.-km area -- slightly bigger than Singapore -- into an "integrated circuit city."

The training center's opening came as tensions rose with the U.S., which has used export sanctions to deny China access to some of the most advanced technologies.

"We are exploring how to integrate microchip production and education to meet the needs of the industry," Lyu Huijun, the center's deputy director, told Nikkei Asia.

The center was initially known as Nanjing Integrated Circuit University. The name was changed in May to "training base" to better reflect its functions and avoid misunderstanding, according to Lyu, since it was not an accredited institution under the Education Ministry.

So far, the center has provided professional training to more than 3,000 college seniors and postgraduate students who already have basic knowledge of semiconductors. Its programs include coursework, workshop time and project-based training, with durations ranging from a week to six months.

Lyu called the center a recalibration of the conventional education system, where engineering schools produce graduates who might not match the actual needs of the industry. 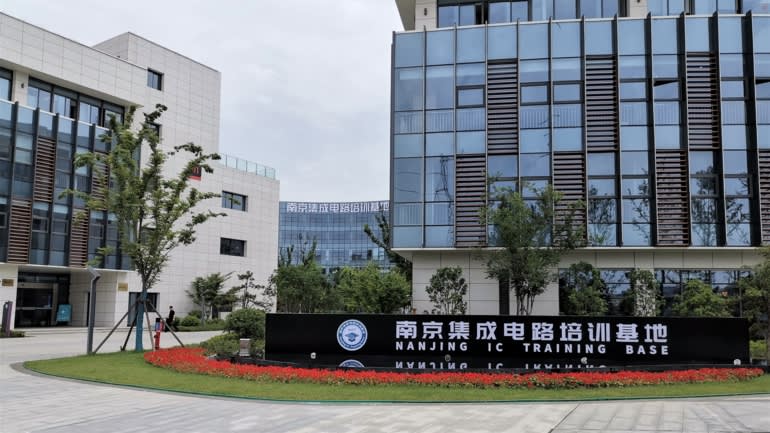 The Nanjing IC Training Base opened last October as part of a government drive to turn an area slightly larger than Singapore into an "integrated circuit city." (Photo by CK Tan)

One way to avoid such mismatches is to work with companies. The center's partners include domestic telecommunications giant Huawei Technologies. Despite the tech friction, another is U.S.-based Synopsys, a leader in electronic design automation (EDA) for microchips that is expected to help elevate the Chinese industry's standards.

The center draws on its partners' resources, including practicing engineers who serve as tutors and shared laboratories in the now 6-year-old IC City, where more than 500 industry players have operations. In May, the center signed deals with 10 semiconductor companies for access to their labs.

"Not every tertiary institution is equipped with good learning facilities, as they are not cheap," Lyu said.

The collaboration gives students practical working and production experience, from software-driven design to fabrication, testing and applications. Courses developed with the partners include artificial intelligence and EDA.

Courses on cloud computing are based on Huawei's Kunpeng hardware and software. Students gain familiarity with the Kunpeng processor's architecture, specifications and uses -- knowledge considered essential for programmers.

Zhang Tianyu, a general manager with Huawei in Jiangsu, said software developers play a crucial role in basic research, addressing the industry's shortcomings and spurring innovation. "We will create an environment for developers based on the latest innovative platforms to support talent development," he vowed.

Students who take courses at the center are expected to enjoy better job prospects. "Potential employers are pleased to know that they are recruiting trained candidates," Lyu said.

"What I learn at the training base is more practical than college courses, enabling me to apply the lessons to my future work more quickly," said Lu Hanqing, a student at Nanjing University of Information Science and Technology. A Huawei Kunpeng chipset: Students at the Nanjing center gain familiarity with the Kunpeng processor's architecture, specifications and uses.   © Reuters

China is counting on the center and IC City more broadly to achieve breakthroughs in "bottleneck" industries where the U.S. is putting on the squeeze and Beijing wants self-reliance: semiconductors, 5G, genetics and so on.

Over the next five years, China's share of global chip consumption is expected to exceed that of the rest of the world by an average of 4 to 5 percentage points across most electronic device categories, according to a joint study by Boston Consulting Group and the Semiconductor Industry Association, a U.S. trade group, in April.

But China lags behind the West in cutting-edge semiconductor technologies, and some of its companies are keen to close the gap by poaching engineers from elsewhere.

In May, the government added 12 new technology schools at the country's top tertiary institutions to further accelerate the talent buildup. The country had 215 institutions of higher education offering specialized AI courses in 2020, according to a Tsinghua University report.

The Nanjing center's emphasis on practical knowledge, in particular, is seen as a step in the right direction, if not a complete solution. "It may close the skills gap, but it cannot possibly train talent that meets every company's requirements 100%, as each company's operational process is different," said Joseph Ng, a certified Huawei network product trainer in Malaysia.

Still, the center is determined to help China's cause. "Through talent development that forms the ecosystem to match supply and demand, we can enhance the competitiveness of China's integrated circuit production," said Deputy Director Lyu.