TOKYO -- Japanese chipmaker Renesas Electronics said Sunday that production may take up to a month to resume at a fire-damaged main factory in Hitachinaka, northeast of Tokyo.

But considering the many processes in semiconductor fabrication, it may take over three months for supply chains to return to normal.

Renesas' fire could not come at a worse time for the auto industry. Already battered by a global shortage of semiconductors, the industry had been scrambling to respond to the Texas winter storm that knocked out production at NXP Semiconductors and Infineon Technologies, the world's No. 1 and No. 3 players in automotive chips.

Renesas is No. 2. It controls around a 20% global share in microcontrollers and supplies the likes of Toyota Motor and Nissan Motor.

The company's shares fell almost 5% in Tokyo on Monday morning.

The fire broke out at 2:47 a.m. on Friday and took more than five hours to bring under control. A production line that produces chips using the latest 300 mm wafers was damaged. About two-thirds of the chips made on the damaged production line are for the auto industry, according to the company. CEO Hidetoshi Shibata told a news conference Sunday that Renesas will make efforts to resume production "within a month." But he acknowledged a "significant" impact on the supply of the chips.

"I apologize for any inconvenience and troubles caused by this incident," Shibata said. "We will make every effort to minimize the impact, including looking at alternative production," he said.

But "it is difficult to say whether it is possible to substitute production at other factories," Shibata said.

A separate Renesas executive said the company only has around one month's worth of inventory. A February earthquake in Fukushima Prefecture had halted production at the same plant, and stockpiles just happened to be on the low end.

A representative of a trading house told Nikkei that combined with the inventories held by distributors, there may be two to three months of chips available. It will be a race against the clock.

"Automakers hold almost no inventories of their own," the trading house representative said. "Once that's gone, the impact will be felt." 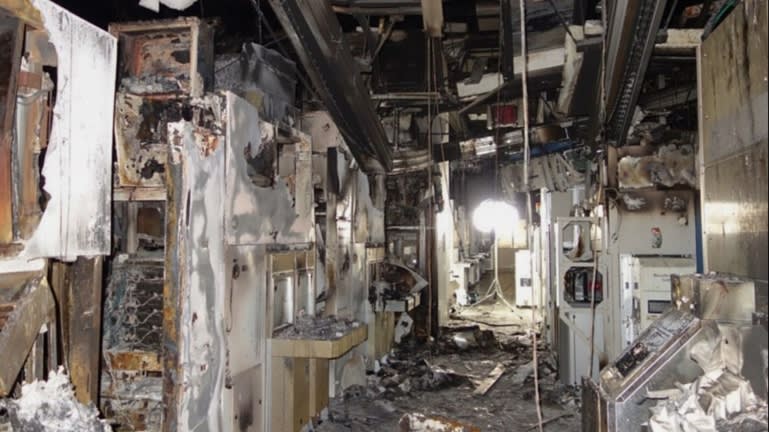 Renesas halted production at the plant at Hitachinaka, northeast of Tokyo, after a March 19 fire broke that took more than five hours to extinguish. (Renesas/Kyodo)

Shibata said that he fears the fire will have a big impact on chip supply. Roughly 50 people from automakers and clients have come to help out, replacing the damaged machinery, he said.

A car is made from around 30,000 parts. Automakers have been consolidating orders to fewer suppliers in order to cut costs, but this has increased dependence on certain partners, making them vulnerable to halts like these.

A slowdown in auto production may hamper a much-needed recovery of the global economy in general as the world prepares to rebound from COVID-19.