Operations at the N3 building at Renesas' Naka factory in Ibaraki, which turns out semiconductors for cars, resumed at 9 p.m. local time on Friday, the company said in a statement.

"We aim to resume production within one month of the occurrence of the fire as initially targeted. We will make an announcement once the production has restarted," it said.

The N3 building was damaged in a fire on March 19. Parts of the fabrication lines were lost. Production was shifted to a factory in western Ehime Prefecture to make automotive semiconductors after the fire.

"We would like to give our sincerest apologies to neighboring residents, partner companies, relevant authorities and all those involved for the trouble," the company said Saturday. 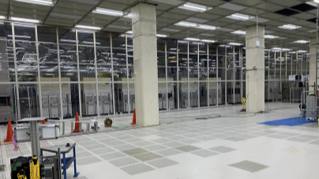 The Naka factory has been repaired following a fire in March. (Photo courtesy of Renesas)

Renesas said as many as 1,600 people a day from partner companies, equipment manufacturers, materials suppliers and construction companies helped to restore the damaged clean room.

"We are sincerely thankful for the rapid assistance we received," it said.

The company had not disclosed the scale of the output at the Ehime plant, which has 200 mm wafer fabrication lines and mainly makes chips for cars. Renesas shifted production to other factories and place orders with overseas chipmakers to make up for the shortfall.

The fire broke out amid a global crunch of automotive chips, which has only worsened since. Japan's largest automakers, including Toyota and Nissan, have begun bracing for long-term disruptions and potential production cuts.

Renesas dominates nearly 20% of global market share for microcomputers, which control cars and other machines. The 2011 earthquake and tsunami caused the Naka factory to halt production for about three months, dealing a blow to the country's auto production.