Working group on strategic technologies planned ahead of Suga-Biden meeting 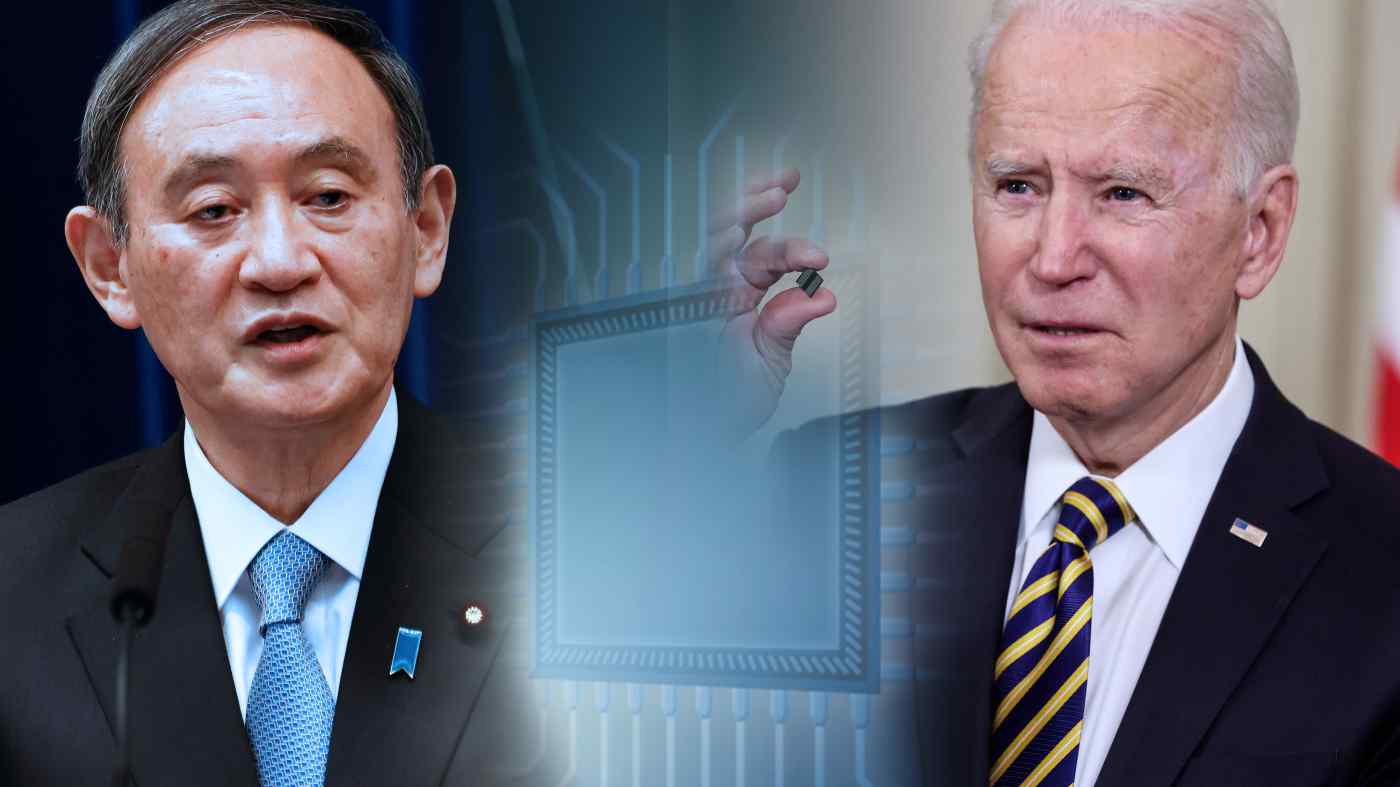 TOKYO -- The U.S. and Japanese governments will cooperate to secure a supply chain for strategic technology components such as semiconductors, Nikkei has learned.

The two sides will set up a working group to determine how to divide tasks between them, such as research and development and production. They hope to agree on the project when Japanese Prime Minister Yoshihide Suga and U.S. President Joe Biden meet on April 16 in Washington.

The two leaders are expected to confirm the importance of creating a decentralized supply network. They will aim to establish a system in which production does not rely on specific regions such as Taiwan, where geopolitical risks are high, and China, where conflicts with the U.S. are deepening.

The working group will be attended by Japan's National Security Agency and the Ministry of Economy, Trade and Industry, along with counterparts from the U.S. National Security Council and the Department of Commerce.

The two sides are considering assigning undersecretary-level personnel to the top posts. First, the working group will identify the risks posed by the current supply networks in both countries.

Both Japan and the U.S. are grappling with a global shortage of semiconductors. The Biden administration has decided to ask Congress to provide a $50 billion subsidy to boost U.S. production of semiconductors.

Japan has strengths in the fields of semiconductor manufacturing equipment and materials. The two sides will consider cooperation in areas such as establishing a joint research base in Japan to develop new technology.

Major chipmaker Taiwan Semiconductor Manufacturing Co. has decided to set up a state-of-the-art semiconductor plant in Arizona, and has also announced a plan to establish a development base in Tsukuba, in Japan's Ibaraki prefecture.

The semiconductor shortage became apparent in the latter part of 2020, after carmakers had trimmed their semiconductor orders in anticipation of a decrease in demand due to the coronavirus pandemic.

In fact, the recovery in the auto market was stronger than expected, but semiconductor manufacturers were already responding to strong demand for laptops and smartphones due to remote working. Power outages caused by the cold weather in the U.S. and a fire at Renesas Electronics' main factory, in northeast Japan, added to the woes.

Japan and the U.S. are wary of the concentration of production bases in China.

According to the Boston Consulting Group, the share of semiconductor production in the U.S. fell from 37% in 1990 to 12% in 2020. The market share of China, which invests huge amounts of subsidies in the sector, is projected to increase from 15% in 2020 to 24% in 2030, making it the largest in the world.