TOKYO -- Japanese makers of the raw materials for computer chips are moving to increase production in South Korea and Taiwan as they look to diversify their supply chains and meet rising demand in important markets.

Tokyo Ohka Kogyo has doubled its photoresist production capacity in South Korea, while Daikin Industries will build a factory in the country to make gas used in the chip production process. While these manufacturers export in large quantities from Japan, they are diversifying their supply chains as semiconductors find their way into more and more products and in response to trade tensions.

Tokyo Ohka Kogyo has doubled its photoresist capacity in South Korea, compared with 2018, by expanding production facilities at its plant in Incheon at a cost of several billion yen. Photoresists are photosensitive materials used to carve circuits onto silicon wafers. The company is the world's largest photoresist producer, accounting for 25% of the global market.

The expanded facilities make photoresists that can be used in extreme-ultraviolet (EUV) lithography, an advanced production technology, by employing resins and other materials sent from Japan in combination with locally available solvents.

Daikin has set up a joint venture in South Korea with a local chipmaking equipment manufacturer. The company will build a plant in the country at a cost of 4 billion yen ($36.6 million). The plant will produce gas used in the etching process, starting in October 2022. Up to now, the company has been supplying South Korea with materials made in Japan and China. Daikin hopes local production will sharpen its competitiveness.

In Taiwan, Shin-Etsu Chemical has brought a new photoresist plant online, investing about 30 billion yen to build the plant and to lift capacity at its plants in Japan. The Taiwanese plant will produce EUV lithography photoresists, which were previously made only in Japan. Showa Denko Materials (formerly Hitachi Chemical), a subsidiary of Showa Denko, will invest 20 billion yen to augment its output of silicon wafer abrasives and printed circuit board materials in South Korea and Taiwan by 2023.

Japanese chemical companies are increasing their investment in South Korea and Taiwan. According to the Bank of Japan's balance of payments statistics, Japan's foreign direct investment in the chemical and pharmaceuticals sectors grew through 2019, particularly in chemicals. That growth is driven by semiconductor-related materials.

South Korea and Taiwan together make up half of global production capacity for semiconductors using advanced 300-millimeter wafers. Samsung Electronics and Taiwan Semiconductor Manufacturing (TSMC) have begun making massive capital investments, increasing demand for semiconductor materials in which Japanese companies have an advantage. 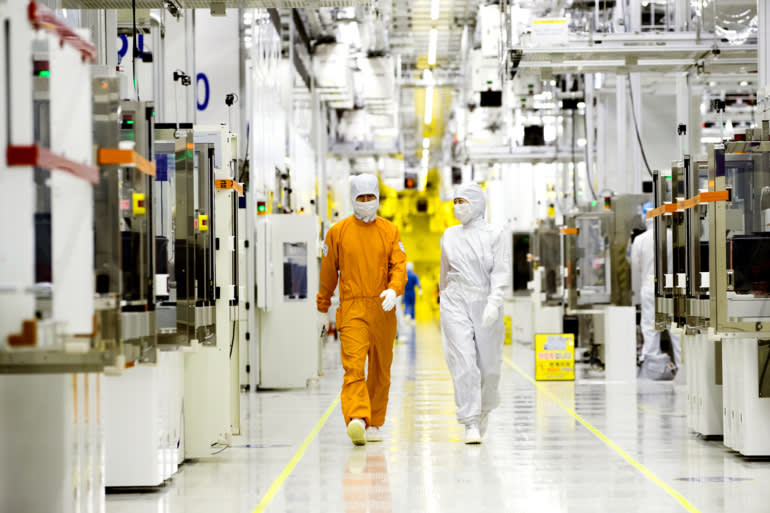 Tokyo Ohka has been strengthening its research, development and production abroad to tailor output to local demand. "Over the past three years, we have made a lot of investments overseas, primarily in South Korea, Taiwan and North America," said a Tokyo Ohka official. Because no chipmakers in Japan are expected to begin producing chips using EUV lithography in the near future, the company's main customers are overseas.

Concerns about supply chains are also pushing production increases in places where demand is strong. The Japanese government placed stricter controls on exports of semiconductor materials to South Korea in 2019. In response, the South Korean government is promoting domestic production of a wide range of semiconductor materials and manufacturing equipment to cut its dependence on Japan. Seoul has encouraged investment from inside and outside the country through R&D subsidies and tax breaks. U.S. chemical company DuPont has decided to produce EUV lithography photoresists in South Korea.

Japanese companies still need permission from the Ministry of Economy, Trade and Industry to export certain chemicals to South Korea. At Stella Chemifa, a Japanese company that makes hydrogen fluoride, shipments of its product for use in the manufacture of semiconductors and liquid-crystal displays fell 26% on the year in the fiscal year ended March 2020. Shipments in the April to December period of 2020 were roughly flat.

On the other hand, there are no restrictions on producing such products in South Korea. According to an executive at a major Japanese chemical manufacturer, "Demand for local production overseas has been rising, year by year, along with the risk of disruptions to supply chains between the U.S. and China, and between Japan and South Korea."

Japanese chipmakers may get a further nudge to raise capacity in the U.S. as well. The Biden administration is stressing the need to build up domestic semiconductor supply chains. It held talks with top executives from 19 private companies on April 12 to get the ball rolling. Partly in response to U.S. government prodding, U.S. chipmaker Intel will invest $20 billion in a new plant in Arizona. TSMC also plans to build a plant in the state.

Two Japanese companies, Shin-Etsu Chemical and SUMCO, between them hold about 60% of the global market for silicon wafers; for photoresists, Japanese companies account for nearly 90% of the world market. Japanese semiconductor materials makers, many of which have plants in the U.S., are operating near full capacity. When new semiconductor plants come on stream in the U.S., Japanese suppliers may be hard-pressed to meet the added demand, presenting both an opportunity for growth and the challenge of financing the expansion needed.