Japan's wooing of TSMC pays off with $7bn chip plant 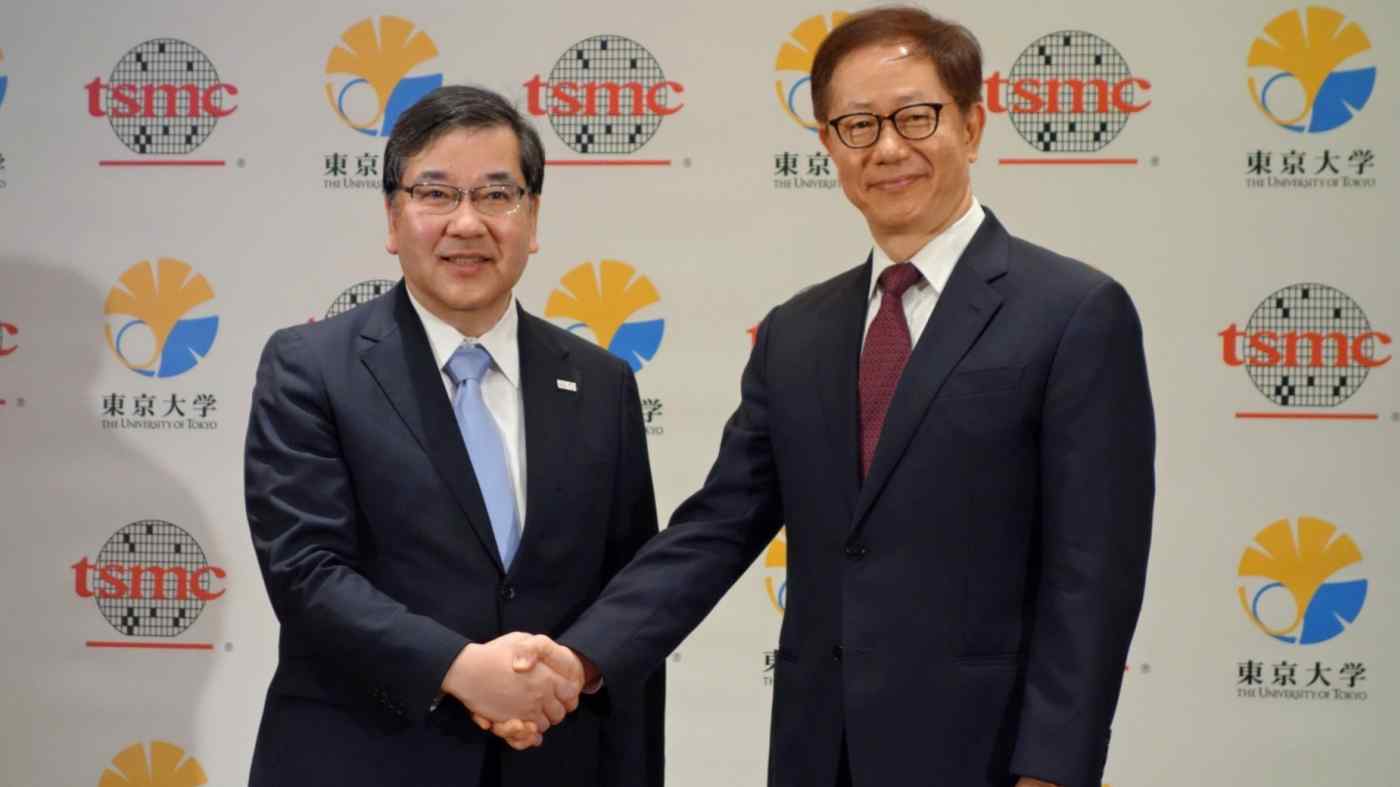 TOKYO -- A new Japanese chip plant in the works by Taiwan Semiconductor Manufacturing Co. is the product of a long-standing relationship between the world's largest foundry and a country seeking to regain its clout in the global semiconductor industry.

TSMC looks to build the $7 billion plant in western Japan's Kumamoto Prefecture in collaboration with Sony Group and other partners. The Taiwanese contract manufacturer's ongoing collaboration with Japan led it to choose the country despite overtures from several others.

This partnership took a large step forward in 2019 when the University of Tokyo formed an alliance with TSMC.

The two sides built a cooperative framework for developing leading-edge semiconductors that will be used for artificial intelligence. TSMC offered its prototyping service, and the University of Tokyo tapped the company's platform for designing chips. The pair exchanged technicians expert in cutting-edge areas of materials science, physics and chemistry.

"We are pleased that we decided to pursue international cooperation at an unprecedented richness and depth," Makoto Gonokami, then the president of the University of Tokyo, said at the time.

TSMC said in February it will build a research center in Tsukuba, a city northeast of Tokyo. The location will develop 3D chip integration technology. Various companies have signed related tie-ups.

The technology of 3D integration allows chips to go beyond the limits of miniaturization. It forms part of the back-end processes that Japan sees as key to regaining dominance in the semiconductor industry.

While the front-end process involves forming circuit patterns on wafers, the back end cuts the wafers into chips, connects chips to electrodes and packages them in polymers. Japanese manufacturers hold an advantage when it comes to materials and new equipment used in back-end processes.

Japan deepened its relationship with TSMC because the nation possesses the world's leading production technology concerning logic semiconductors. The advancement of chips, as well as R&D in peripheral industries, is closely tied to production tech.

But figures in industry, government and academia have voiced concerns that Japan lacks an advanced production line for logic semiconductors. This absence leaves Japan dependent on overseas sources for these chips.

Furthermore, if Japan continues to miss out on the opportunity to develop leading-edge fabrication processes, it risks losing the knowledge, talent and other legacies built up in that area of the domestic chip industry. Japan's device and material makers could relocate core functions abroad.

"Japan is losing its base for advanced logic semiconductors," said Tetsuro Higashi, who chairs the executive board of TIA, a chip innovation group in Tokyo that unites representatives from industry, government and academia. "It's imperative that we have the manufacturing processes along with the talent and development engineers to support them. We are formulating a strategy that sees it taking 10 years to build up front-end processes."

TSMC's planned $7 billion plant in Kumamoto Prefecture would make chips in the 20-nanometer range. Because the most advanced chips in the world are 3 nm, this plant would use manufacturing technology that is nearly a decade old.

Yet the plant would answer a growing demand for chips in the automotive sector and for industrial applications, providing the type of facility that Japan had once given up on.

Simply luring plants to Japan alone will not bolster the country's chipmaking base. But plant engineers and companies in the supply chain would be directly involved with the production lines. The proposed Kumamoto plant would be crucial piece to developing a technological base for advanced logic chips in Japan.

There are some open questions that threaten to turn TSMC's entry into a flop. Will Japanese companies be dependable clients? Though Japan has lost its presence when it comes to electronics such as appliances and home computers, it is home to industries that still have a healthy appetite for chips.

They include the automotive industry, where self-driving and electrification technologies are being developed, as well as smart factories. These markets need to be cultivated faster before they lose their value as semiconductor customers.

Another question is how Japan will support operations. Chipmakers in China and South Korea receive government assistance to keep factory operation costs down. Without an equal footing in the competitive environment, attaining mass production would present a daunting challenge.

Japan's Ministry of Economy, Trade and Industry unveiled its so-called Strategy for Semiconductors and the Digital Industry in June, saying it "will be conducted as a national project that goes beyond general private-sector support."

It remains to be seen whether industry, government and academia will unite in rebuilding Japan's semiconductor industry in a field marked by big, sudden shifts in the market and in technological trends. If the Japan can follow up its R&D hub with TSMC with the factory, it will have gone along way in reaching this goal.