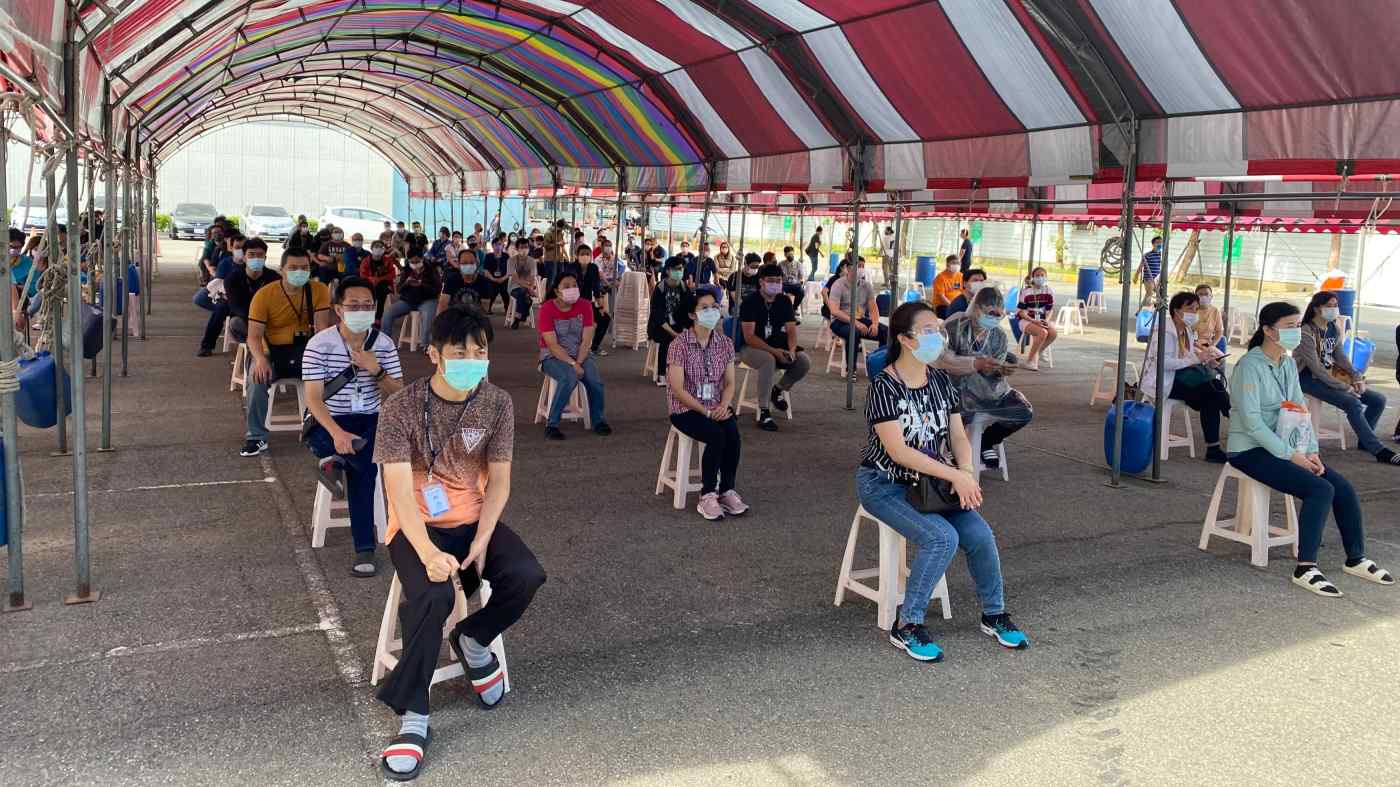 King Yuan is testing all of its 7,300 employees in Taiwan, including more than 2,000 migrant workers. (Photo supplied by company).
LAULY LI and CHENG TING-FANG, Nikkei staff writersJune 10, 2021 18:07 JST | Taiwan
CopyCopied

TAIPEI -- Cristylyn was getting ready for a regular night shift at King Yuan Electronics when she was asked to take a COVID-19 test. Filipino colleagues at the factory in Miaoli in western Taiwan had contracted the virus.

"We were all very shocked that this happened," the line worker, who asked to be referred to by an alias, told Nikkei Asia.

King Yuan decided to test all of its more than 7,000 employees, including some 2,000 migrant workers like Cristylyn. But even when some tested positive, the key chip testing supplier to Intel, MediaTek, Nvidia, Novatek and STMicroelectronics, kept operating at full capacity.

King Yuan reported its first confirmed case on May 30, according to the company's stock exchange filing, but that grew into a cluster of more than 250 as of Thursday -- the largest so far at a Taiwanese chip plant.

King Yuan suspended production on Friday evening but partly resumed on Sunday evening. All its migrant workers were ordered by the government to go into quarantine for 14 days.

"Some of my colleagues still went to work after confirmed cases were reported, and that was not very safe," said Cristylyn. "What the company should have done earlier was test all employees and stop production for a while. They acted a bit late, and that's why the virus had already spread."

COVID-19 cases have also been found in at least three other nearby tech companies: chip packaging and testing supplier Greatek Electronics, networking gear provider Accton Technology, and Foxsemicon Integrated Technology, a chipmaking equipment affiliate of Foxconn. Greatek and Accton have already tested all their employees, and Foxsemicon said it will suspend production for three days to test staff.

The outbreak threatens supply chain continuity. It could cause further shipment delays at a time when the world is suffering from a severe semiconductor and component shortage.

"Of course production and the whole supply chain will be disrupted, and the shipment schedules will be affected," a chip industry executive told Nikkei. "We expect the chaotic situation could last at least one to two months as all production needs to be rearranged, but we hope infections won't get worse."

The discovery of a cluster of some 300 people in around a week shone a spotlight on Taiwan's neglected but critical workforce of some 713,000 migrant workers. Around 63% are employed in manufacturing sector, while the rest work in sectors such as health care, according to the latest available Ministry of Labor Affairs data. Vietnam is the biggest source of labor work in the factories, followed by the Philippines, Indonesia, and Thailand.

The inconvenient truth is that migrant workers keep most of the chip and tech factories in Taiwan running 24 hours a day, seven days a week.

Migrant workers are vital to the production lines at major Taiwanese electronics and chip manufacturers, a human resource expert at Intelligence Manpower, a recruitment company, told Nikkei. "Migrant workers often take shifts from late night to the next morning or afternoon shifts from around 4:00 pm to midnight," he said. "These are the shifts for which tech manufacturers cannot find sufficient local workers." 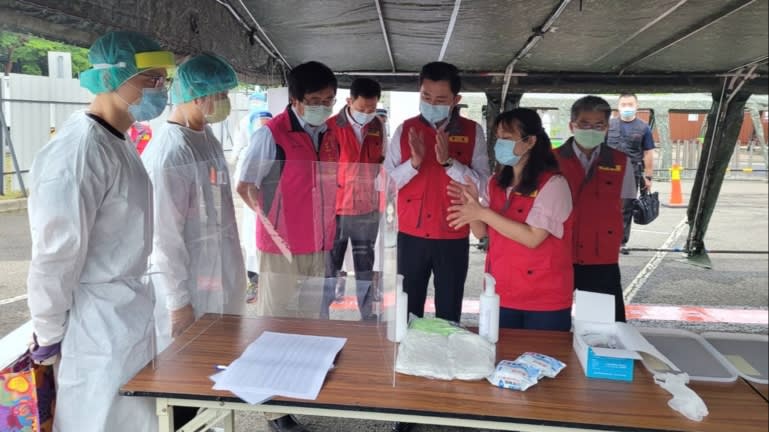 Cristylyn is a night worker, and considers herself "one of the lucky ones."

A university graduate in the Philippines, Cristylyn has worked several years at King Yuan, and describes her living conditions as "tidy, clean and safe." There are up to seven people in each dormitory, and 10 of these on each floor of the accommodation blocks. Toilets and bathing areas are shared.

"I think the company has done many things to prevent the COVID-19 virus," said Nathaniel. "We always wear masks inside the factory, and take our temperature twice a day. The management also advised us not to go outside the plant after the government raised the alert level in mid-May."

The company's cafeterias, however, were not closed before the COVID-19 were confirmed. Many cases in the cluster are linked to the shared dormitories where conditions are ripe for transmission.

"We've been telling the labor ministry over and over again in the past year that the crowded living environment for migrant workers would be a loophole for COVID prevention," said Wu Jing-ru, spokesperson for the Taiwan International Workers' Association. There are cases of dozens of people being crowded into one room and the government doing little to improve the situation, as such improvements and prevention measures increase costs for companies and human resource agencies, Wu said.

"There are many factories that have hired over 1,000 migrant workers," the labor activist said. "This is a crisis but it is also a chance to review and improve the living conditions of foreign workers in Taiwan. We hope the government can deal with the situation with some longer term planning."

The Taiwanese government is this week reviewing working and living conditions in nearly 1,170 companies that have more than 50 migrant workers.

"We will check if their dormitories have isolation and triage measures, and if they disinfect areas on a regular basis," a government health official told Nikkei. "We will advise but not force companies to reduce the number of migrant workers sharing a room to a maximum of four people."

The official said the government will help in the search for hotels where companies can relocate people as a temporary measure, but noted that companies will have to absorb most of the cost. 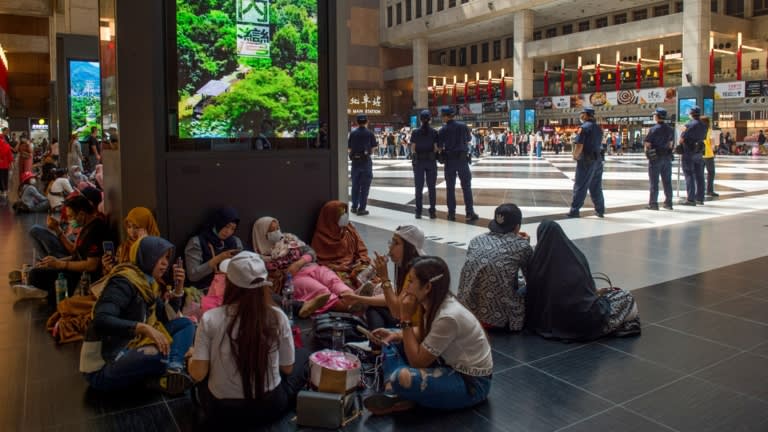 Muslim migrants gather at Taipei Main Station during Eid Al-Fitr, which marks the end of Ramadan in May last year.   © AP

Asuka Lee, chief editor of Migrant Park, a publication that specializes in migrant workers' affairs, said it is fortunate that the cluster has been found in the chip manufacturing sector, where conditions are generally better.

"If this was happening in traditional industries, I cannot imagine how bad it would be," said Lee. "In the chip sector, dorms are similar to universities, but many migrant workers in traditional industries live in terrible conditions. Some are like open warehouses with hundreds of people sleeping together, and at work, they don't have enough protective gear to prevent transmission of the virus."

Lee said tech suppliers tend to have better working conditions because international clients such as Apple require it and strictly audit their supply chain.

But overall, migrant workers are at higher risk of occupational injuries than locals. In manufacturing, accidents are twice as high among migrants, according to government statistics. Some 881 migrant workers died or were disabled during work between 2017 and 2019 -- an average of almost one a day.

According to the Intelligence Manpower specialist, some chip production, and the majority of chip packaging and testing, print circuit board production and electronic assembly, involves migrant workers. "If there were no migrant workers, the tech manufacturing sector in Taiwan could face major disruptions," he said. "The only way is to increase automation but not every company can afford such investment."

Taiwan Semiconductor Manufacturing Co, the world's biggest contract chipmaker, does not employ any migrant labor, unlike most of its local competitors. ASE Technology Holding, by contrast, is the world's biggest chip packaging and testing service provider. It employs over 10,000 migrant workers -- around 18% of its total workforce in Taiwan. King Yuan has more than 2,000 and Greatek over 1,000, while Foxsemicon only employs 62.

Accton, one of the four companies in the cluster, said it is looking for available buildings in the vicinity of its factories as backup dormitories, spokesperson Irene Chen said.

King Yuan and Greatek spokespeople both said it is extremely challenging to suddenly increase accommodation. "Nobody wants to lease their apartments at this point," said Greatek spokesperson Chen Sheng. "And we don't want our dorms scattered here and there as that would create more risks."

ASE said that it has adopted extremely strict prevention measures to divide its workforce into different groups and has built its own mask production line to guarantee all its employees have enough. The company has a large migrant dormitory at its main plant in Kaohsiung, southern Taiwan.

"Currently, our migrant worker employees are only allowed to travel between the plants and the dorms," a spokesperson told Nikkei. "We are forbidding them from going outside during the surge."

The regulation is as strict as you could not take off the masks for a single second, other than having bento boxes and drinking water, a local ASE employee told Nikkei. "There are some assigned supervisors walking around offices to spot people who do not wear the masks properly or violate some prevention regulations," an ASE employee told Nikkei. "They issue immediate warnings, even to senior managers."

Kinsus Interconnect Technology, a leading printed circuit board and chip substrate supplier, and a Pegatron-affiliate, has around 1,000 migrant workers -- about a quarter of its workforce in Taoyuan and Hsinchu, northern Taiwan. The company said it stepped up COVID-19 prevention measures in late April when a cluster infection surfaced among China Airlines cockpit crew in Taoyuan.

The company segregated administration and production staff, and in the middle of May started giving cash-equivalent incentives to migrant workers who remain in their dormitories after work for five straight days. Remote religious worship arrangements have also been made, according to Scott Chen, the president of Kinsus.

"Looking at the King Yuan cluster, you can see the transmission of the virus was so strong that it is not possible to have zero risk," Chen told Nikkei. "What we can do is to make sure that if there is a confirmed case at our company, we immediately identify and isolate 30 to 40 people linked with the case and conduct tests to minimize the impact."

Cristylyn at King Yuan said she views Taiwan as her second home and longs for normality. "We pray that this pandemic ends soon," she said. "I think the company and the Taiwanese government are doing whatever they can to overcome the crisis."