TOKYO -- With chipmaker Renesas Electronics not expected to achieve a full recovery from its recent factory fire until mid-July, Japan's largest automakers have begun bracing for long-term disruptions and potential production cuts.

The fire follows other incidents that have sapped global supplies of automotive chips. Nomura Securities estimates disruptions from the Japanese chipmaker alone could dent global auto production by 1.6 million vehicles in the April-June quarter, or 7% of planned output.

Automakers are scrambling for chips to minimize the blow.

"We'll probably just about be able to secure enough chips to last through June, but we're going to have some trouble in July and beyond," said an executive at Toyota Motor. Renesas is one of the company's key suppliers.

"We expected it to take some time before production [at Renesas] returned to normal, but this is an extremely difficult situation," another Toyota executive said. "We have no choice but to plan some sort of production cut."

"We are reviewing our inventory and the situation to predict which chips for which models could run out," the second executive said.

Wholesalers apparently possess chip stocks to support two to three months of auto production overall. But not every model has as much leeway.

"Production for some of our models could start suffering an impact by the end of April," a Honda Motor executive said.

Nissan Motor is considering a production cut as well. "It all depends on whether we can make up for it in the second half" of the fiscal year, an executive said.

Some think disruptions to the supply of chips from Renesas could last much longer than expected.

"Bringing production back completely in three or four months will be extremely difficult, and companies should consider the possibility that effects will last for at least about six months," said Sanshiro Fukao, senior research fellow at Itochu Research Institute.

The impact could ripple far beyond Japan. Renesas is a major supplier to German auto parts maker Continental. A production cut at Continental would impact a range of automakers across Europe and the U.S. 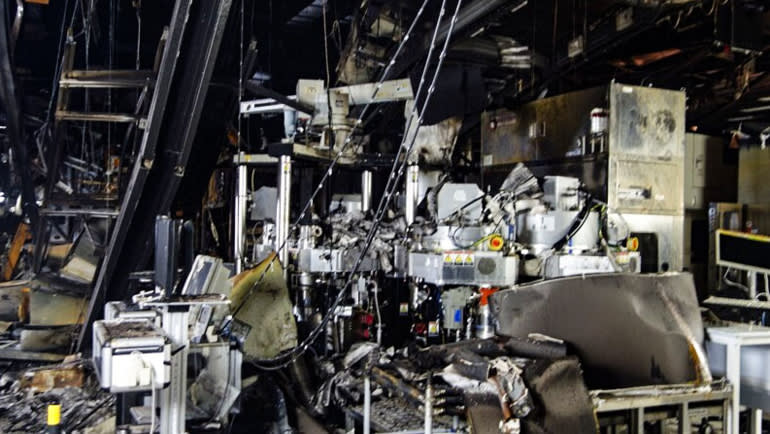 The fire broke out at Renesas' Naka factory in Hitachinaka, Ibaraki Prefecture, on March 19. Production at the facility is not expected to recover completely for months. (Photo courtesy of Renesas)

Renesas is the world's second largest manufacturer of automotive chips after NXP Semiconductors. Any production halt for carmakers would have a major impact on the Japanese economy, with autos accounting for about 18% of exports and 15% of manufacturing output.

The fire broke out on the first floor of the Renesas factory in Hitachinaka, Ibaraki Prefecture, north of Tokyo, on March 19. It damaged 23 machines used in chip production, Hidetoshi Shibata, company president and CEO, told an online briefing with journalists and analysts on Tuesday.

Shibata said that he was now "more certain" that production could resume in a month's time, as he had previously indicated on March 21.

But he acknowledged that there would be a supply shortfall for a month or two, once Renesas exhausts its current stocks of semifinished products at the factory. Those stocks are expected to run out within a month of the restart of production, while it takes 120 days to make a chip from scratch.

"It is expected to take a little more than 100 days before full-capacity production is restored," Shibata said. "We will do our best to make the gap as short as possible."

During Tuesday's presentation, Shibata showed an image of a factory floor where scaffolding is seen standing alongside chipmaking equipment. Shibata said that work to reinforce the ceiling beams and other structures of the building is now complete and debris has been removed. Scaffolding is seen in the factory, showing Renesas' recovery work after the fire. (Screenshot from Renesas' website)

The fire burned 11 of the roughly 390 machines on the first floor. But close inspection showed that 12 others also need some kind of repair. Those machines have been contaminated with soot and chlorine produced by the fire.

The company is scrambling to examine whether the semifinished products are still usable. The clean room for production is being cleaned to ensure the air will be free of chloride and other chemicals.

Most of the 23 damaged machines will be replaced in April and May. However, some will have to be made from scratch and will not be installed until June.

A long-term impact on production is expected to weigh heavily on the company's balance sheet. Renesas expects a hit of 17.5 billion yen to 24 billion yen ($158 million to $218 million) from the recent halt.

The chipmaker will make up for lost output by using other Renesas plants and other manufacturers. Shibata said he expects the lost output will be made up for in the third and fourth quarter, and the company is also in talks with foundries in Taiwan and other overseas markets to contract out production in the meantime.

Renesas has nearly 20% of the global market for microcomputers, which control cars and other machines.

The factory was operating at more than 90% of its capacity at the time of the fire, said Masahiko Nozaki, production chief. Renesas has said an electricity overload was the cause of the fire, prompting speculation that the company may have been overworking the factory to respond to the global semiconductor shortage. Nozaki said, however, that the ultimate cause of the fire remains under investigation.

The global chip shortage has been caused in part by a surge in demand for computers and servers, as more people work from home and use cloud services during the pandemic. The situation has been exacerbated by a Texas winter storm, which knocked out chip production in the U.S.