A Tottori startup is turning crab shells into nano-materials

TOKYO  A potentially valuable resource from the Sea of Japan has been ending up on the trash heap: crab shells. Now, researchers at a university in coastal Tottori Prefecture are taking the shells off of the trash heap and putting them to high-tech use.

Tottori is Japan's crabbing capital. According to the Fisheries Agency, local fishermen brought in around 9,700 tons of the crustaceans in 2014 -- nearly half of the country's total catch.

And now researchers at Tottori University have figured out how to turn the shells into nanofibers. The plan is to establish a startup, possibly by this spring, that will seek to commercialize the technology for use in beauty and food products. If the university pulls it off, it could be the start of a whole new regional industry.

DELICACY TO NANOFIBERS   Tourists visiting Tottori set their sights on snow crabs, a delicacy, as well as the area's famous sand dunes, shrines, hot springs and fruit. The species used for canning and in processed foods is red snow crab. In fact, more than 90% of the crabs caught in Tottori are red snow crabs. After the crabs are processed by the local fishing industry, the shells are discarded as trash.

Tottori University Associate Professor Shinsuke Ifuku was looking for ways to effectively utilize crab shells to make use of the region's bounty, and he hit upon the concept of developing a new material in Tottori. 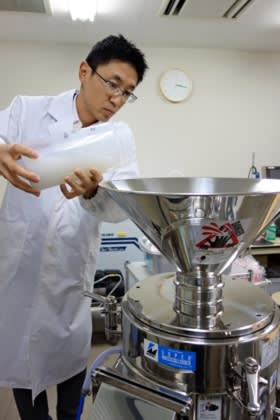 Chitin is turned into nanofibers using a machine that crushes it like a mortar and pestle.

Ifuku studied under Professor Hiroyuki Yano of Kyoto University, one of the leaders in plant-derived cellulose nanofibers (CNF). This background led him to conceive of creating a nano-material by unraveling chitin, a substance that makes up 20-30% of crab shells. He calls the result "marine nanofibers."

Chitin is a natural material that is used as an additive in diet foods, among other applications. The key feature of marine nanofiber is that the chitin is made into a nano-material. Water is added to chitin from the crab shells, along with an acid to make it easier to unravel the chitin, and is made finer using equipment that works like a mortar and pestle. This process is repeated until it produces a dispersion liquid of fine fibers an average of 6nm in width.

With the objective of low-cost production in sight, Ifuku will launch a university-backed venture as early as March. The startup will procure chitin produced locally from crab shells, using equipment at the university to process it into nanofibers "having a high potential as cutting-edge materials," and sell it.

Chitin, from which the nanofibers are made, does not mix with water in powdered form, but processed with the acid, the nanofibers repel each other, become long and thin, and then mix with water, achieving a gel-like state. It then has the same properties as CNF, for example increasing strength when included in film. However, "as we considered this deeply, we sensed that we would be unable to cultivate demand if we pitched it as the same as CNF," Ifuku explained.

CNF is material made from wood and has five times the strength of steel while weighing just one-fifth as much. Nippon Paper Industries can turn out 30 tons of CNF a year and will raise that more than 10-fold in fiscal 2016. Chuetsu Pulp & Paper will also begin mass production in fiscal 2017. The material is priced at 5,000 to 10,000 yen per kilogram, but in terms of aspects such as stable supply, marine nanofibers, while just at the research stage, will only be playing second fiddle to CNF, which is already at the mass production stage.

BREAD ADDITIVE?   One idea is products for application in the healthcare field. Although the mechanism is not well understood, it is known that chitin is effective in treating skin irritation, as well as cuts and burns. Marine nanofibers, made from chitin

Ifuku confirmed the effect by applying a dispersion liquid of marine nanofibers to mice with cuts in their skin. Eight days later, the cuts on untreated mice had not healed, but in the mice that had been treated with the liquid, the cuts had healed, the scabs had already fallen off and the collagen component of the skin had increased.

When compared to powdered chitin, the nanofibers have greater surface area and adhere more readily to the skin. The ability of the dispersion liquid to spread the nanofibers uniformly over the skin could be one reason for the result. When the material is applied to human skin, a film forms, producing a moisture-retaining effect.

In the foodstuffs field, the new material is being considered as a possible additive in bread. The reason bread rises is that the gluten in flour acts as a wall, allowing air to build up inside. Adding marine nanofibers reinforces the gluten walls, making it possible to reduce the amount of flour by 20%. The result is low-calorie bread, commercialization of which is being hastened.

In September 2015, Asahi Food & Healthcare commercialized a moisturizing lotion containing marine nanofibers. Following this first step, Ifuku is accelerating commercialization efforts by launching the startup. In addition, he said, joint research aimed at commercialization is being conducted with around 10 chemical and food producers.