SHANGHAI -- Noodles give Cheng Congwu a chance to talk business. The busy CEO of AutoNavi Software, a major Chinese location information service, Cheng often talks with his colleagues about the future of his country's Internet industry while slurping ramen at lunchtime.

As a child, Cheng walked through a mountain path to school, carrying his younger sister on his back. After study, he cut firewood for use at home. His formative years, spent in a mountainous area of Hubei Province, helped give him the strength he needed to endure the trials and tribulations of being an entrepreneur. 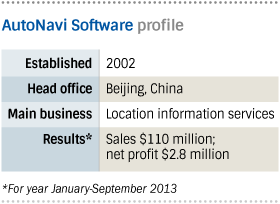 AutoNavi, which he co-founded in 2002, was quick to notice the potential of map digitization in China. It achieved rapid growth after its digital map content was adopted in car navigation systems sold in China by major global automakers, including Germany's Volkswagen.

The company now offers map information services through smartphones as another pillar of its growth strategy. Baidu, the leading Chinese Internet search service, also regards smartphones as the entrance to the Internet. "Our competition will be a contest of endurance," said Cheng.

His foresight will be tested as competition with Baidu heats up.