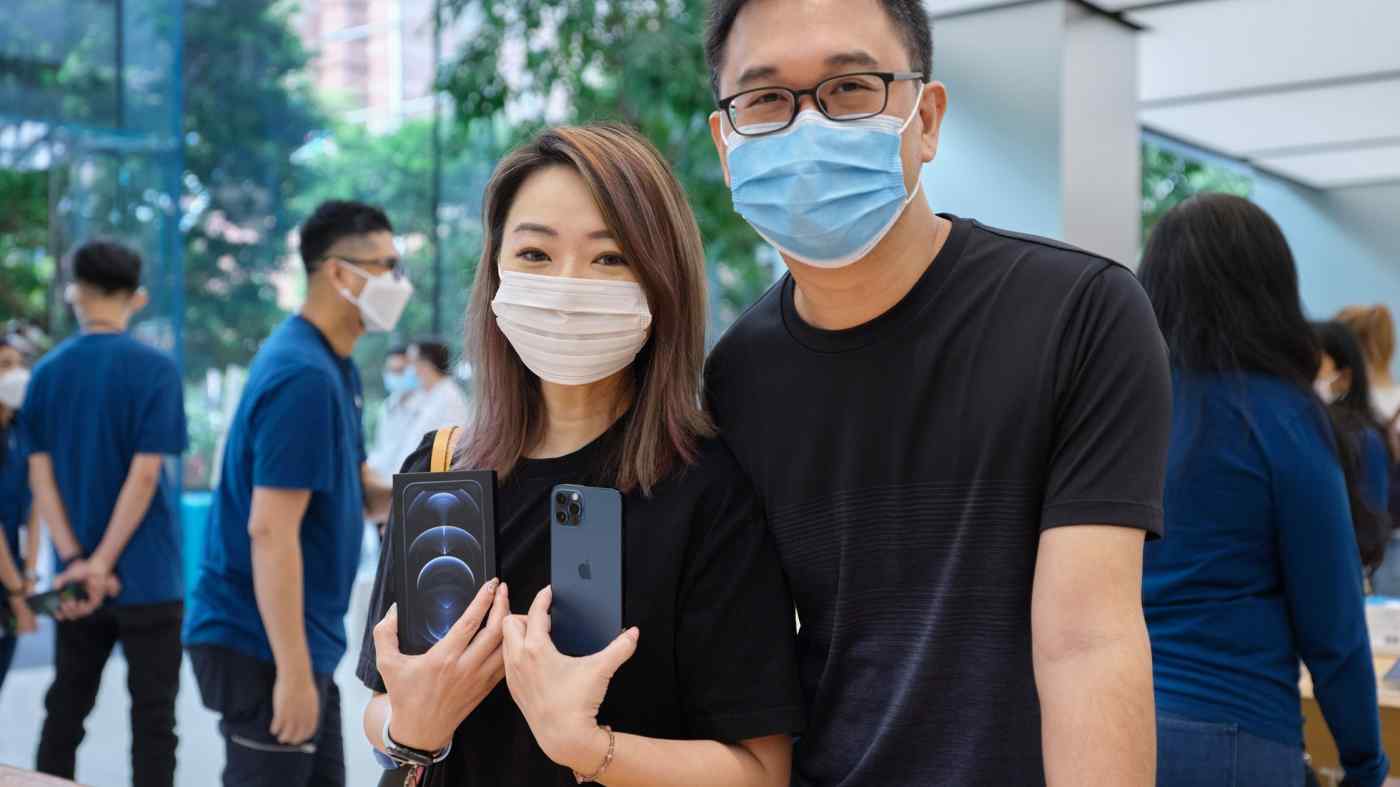 PALO ALTO, U.S. -- Apple reported record quarterly results on Thursday, defying supply chain disruptions and economic downtrends brought on by the COVID-19 pandemic. However, a delayed launch of the iPhone 12 -- the company's first 5G smartphone -- led to a sales plunge in greater China, a key revenue growth region for the U.S. tech giant.

For the three months ended Sept. 26, Apple posted 1% year-over-year total revenue growth to $64.7 billion, a record for a September quarter, thanks to strong demand for Mac and iPad products driven by the widespread adoption of working from home and remote learning. For the last 12 months, the company recorded $275 billion in total revenue, a 5.5% jump from last year.

All regions other than greater China saw sales increases in the quarter. Greater China, which includes mainland China, Hong Kong, and Taiwan, however, reported a 28.6% year-over-year revenue decline to $7.95 billion in the quarter. Apple said the drop was mainly due to the postponement of the launch of the latest iPhone, which normally comes in early to mid-September each year and makes up a significant part of the fall quarter revenue.

"Greater China is the region that was most heavily impacted by the absence of the new iPhones during the September quarter," Apple CEO Tim Cook said during an earnings call Thursday.

For the 12 months ended in September, greater China reported total revenue of $40.3 billion, a 7.7% decline compared to last year.

The postponement of the new iPhone was mainly due to factory lockdowns and workplace absences during the pandemic, which led to a late start for iPhone 12 manufacturing. Apple said it expects supply chain disruption will continue to weigh on the supply of the company's smartphones and other hardware products.

"If you look at iPhone supply, we are constrained today. And that's not a surprise. We're at the front end of the ramp if you will. And how long we will be supply-constrained, it's hard to predict," said Cook.

"We're working really, really hard to remedy those as quickly as we can, but at this point, I can't estimate when we'll be out of that," he added.

The company's stock was down 4% in after-hours trading after the earnings release.

China remains a key battleground for Apple as analysts estimate that between one-quarter and one-third of all new iPhone sales in 2020 will be in the country. Despite a lackluster September quarter, company executives remain bullish on the region with the launch of 5G-capable iPhone 12s in mid-October.

"5G is fairly advanced [in China] and they're forecasting 600,000 [5G] base stations by the end of the year. So we're entering the market at a very good time," said Cook.

Over 50% of smartphones sold in China from July to September were 5G Capable, according to Counterpoint Research.

Without disclosing any specific sales number, Apple said it is confident about the China market performance after orders of the new iPhones got off to a strong start in October.

"Given the initial data points that we see on iPhone12 and iPhone 12 Pro, I would tell you that we're confident that we will grow this quarter in China," Cook said.

Apple is facing a head-to-head battle with Huawei, the leader of the Chinese smartphone market. Last week, the Chinese handset giant released its latest 5G smartphone lineup, the Mate 40 series, which compete directly with iPhone 12 for high-end Chinese consumers.