While techies from across the globe have historically gathered near Apple's Silicon Valley headquarters for the annual Worldwide Developers Conference, the highly anticipated five-day event is being held online again this year because of the COVID-19 pandemic.

Apple shows off a new version of its iPhone operating system each year, and Monday was no exception. New privacy features in iOS 15 make it easier for the user to know which apps are collecting what data. The updated Mail and Safari apps read email and browse websites while thwarting trackers through such means as hiding the user's IP address.

"Apple's tightening of privacy options for users is the defining theme for this year's WWDC and will cause further consternation among those companies dependent on user data for tracking, advertising and monetization," said analyst Ben Wood of research firm CCS Insight.

The App Tracking Transparency function Apple announced last year has had a detrimental impact on social media companies and others that rely on an advertising model, as it hinders their ability to collect user data for customized ads. 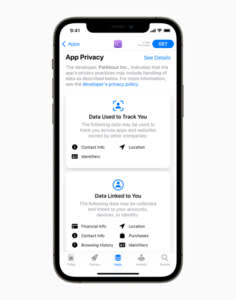 "This [iOS 15] follows the iOS 14.5 release which has doubled down on privacy features for the consumer at a time when Apple has directly put itself on a collision course with Facebook around the ability for users to block data tracking," said Dan Ives, managing director at Wedbush Securities.

"Hiding information such as IP addresses, location and whether users have opened or read emails could severely limit the way many companies track and monetize users but will be welcomed by consumers who are becoming increasingly aware of how much data is being captured," said Wood of CCS.

In Monday's keynote session, the technology giant also announced a new macOS version named Monterey, along with new versions of the operating systems that power the iPad and the Apple Watch. It did not unveil any new hardware that day.