An avatar robot developed by Telexistence sorts and displays beverages at a FamilyMart store in Tokyo under the guidance of its human controller.
SAORI IKARASHI and NORIO MATSUMOTO, Nikkei staff writersOctober 24, 2020 10:01 JST | Japan
CopyCopied

TOKYO -- Japanese startups are getting ready to deploy a small army of remote-controlled robots in the workplace.

Called avatar robots, the machines are still experimental and their initial objectives limited. But if everything goes as planned, they could soon be clerking at convenience stores, patrolling buildings as security guards, or even assisting astronauts in outer space.

Convenience stores in Tokyo have already put prototypes of the robots to work stocking shelves with beverages, instant noodles and other goods. The robots are controlled remotely from about 10 km away, with operators using virtual reality goggles and motion-sensor instruments to work their "avatars."

The robots were developed by Telexistence, a Tokyo-based startup, which began testing its technology in FamilyMart and Lawson convenience stores in the capital this summer.

In September, a new Lawson store owned by a subsidiary of Telexistence opened as a test bed for the technology. "We are trying to change the retail business, which is burdened by outdated traditions," says Telexistence CEO Jin Tomioka. 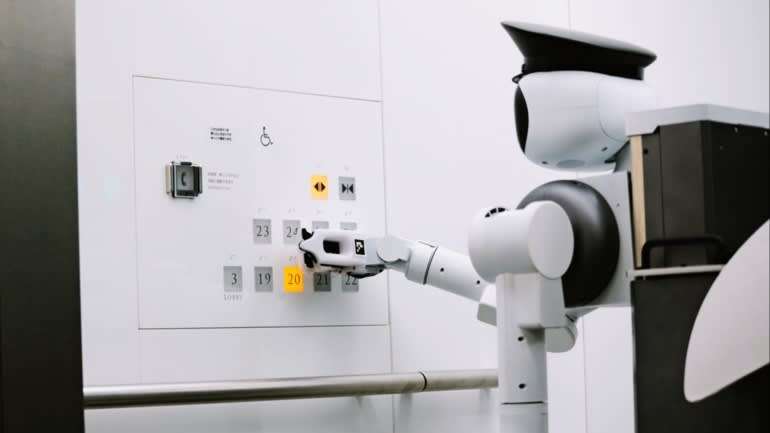 With a bit of human help, a robot developed by Mira Robotics can use an elevator to move between floors when patrolling a building.

Kunitsugu Makino, head of Lawson's Open Innovation Center, says he was inspired by Tomioka's vision of using robots to streamline retail. A FamilyMart executive says avatar robots can "transform the way stores are managed." The store chains envision a future in which their outlets are operated by an army of avatars.

Telexistence wants to develop robots that can operate on their own. They should also be able to share sensory and kinetic data via the cloud so that they can teach other robots how to accurately grasp and position objects, among other things.

Empowering one human operator to control robots at multiple stores simultaneously could ease the industry's labor shortage. Robots can be controlled around the clock from different countries and time zones, potentially resulting in a huge reduction in labor costs. "It might be possible to hire people where labor costs are lower and let them supervise robots," said Tomioka.

The company plans to introduce humanoids at 1,500 outlets in Japan within three to four years.

Avatar robots are the brainchild of Susumu Tachi, professor emeritus of the University of Tokyo and chairman of Telexistence. His idea has been to develop technology that enables people to work as if they were present at different locations simultaneously. He called the concept "telexistence" and spent 40 years developing the idea.

To drive his dream, Tachi teamed up with Tomioka, who was involved in the venture capital business of Japanese trading house Mitsubishi.

"The times have finally caught up with us," Tachi said. Japan's labor crunch is not the only reason for developing the technology. Telexistence could help mitigate the dangers of dealing with natural disasters, disease outbreaks and other emergencies in densely populated urban areas, with avatar robots replacing emergency responders.

Tachi hit upon the idea in 1980 while working on a guidance system for visually impaired people. He thought about creating a machine that could transmit visual experiences between people in different locations.

Last November, Tachi unveiled the sixth-generation prototype of an avatar robot. "Now that many startups have entered the field, a new industry could be spawned," he said.

Avatar robots could be stationed anywhere in the world, offering myriad possibilities.

Equipped with two robotic arms, the machine -- named "Ugo" -- can make the rounds of commercial facilities like human security guards, either on its own or assisted by humans. Ugo is fairly independent but needs help when using elevators or guiding guests.

Japan's private security service industry is facing a serious labor shortage, with the jobs-to-applicants ratio now at over five to one.

Initially, Taisei will assign one human security guard to two robots, but the company plans to boost this to three, said Norihiro Kato, a senior managing director at the company. Each robot would cost the client around 180,000 yen ($1,700) per month under a flat subscription plan. 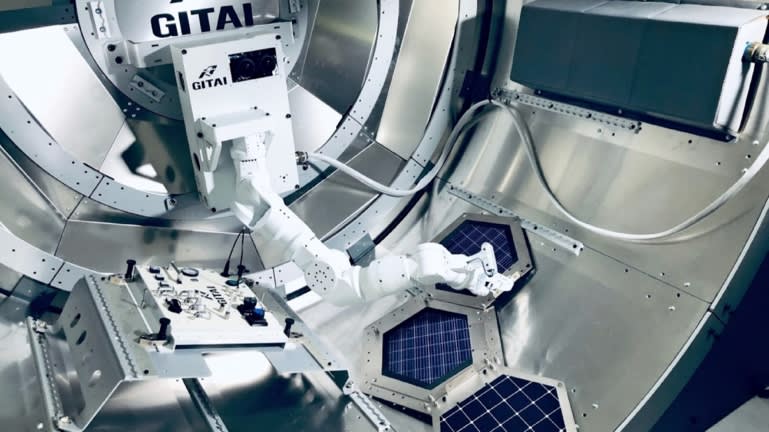 Gitai's robot arm is tested at a facility that recreates the inside of the International Space Station.

Gitai, a robotics startup based in California, is developing humanoid robots that can perform mundane tasks currently done by astronauts in space stations. The robots will be deployed to the International Space Station to take care of such chores as cleaning, simple experiments and maintenance, allowing astronauts to focus on more complicated work.

The potential to drastically cut costs has NASA interested.

Gitai is developing both humanoids and robotic arms for use in space. They mostly operate autonomously but can be aided by ground-based technicians equipped with a VR headset and controller. The robot can share its tactile experiences of touch and force, and respond in milliseconds, allowing the operator to move it with great dexterity and precision.

"Robots will be used to perform a number of tasks in place of humans in space as well as on earth," predicts Gitai CEO Sho Nakanose. The company plans to test its robotic arm at the space station in 2021. It also hopes to operate robots on the moon in the mid-2020s.

The global market for remote-controlled robots will grow to $789 million in 2027, up from $181 million in 2019, according to a forecast by Verified Market Research, an Indian market research company. The expected spread of 5G technology, which offers much faster transmission rates than 4G, is expected to fuel growth.

The advent of even faster 6G technology will likely speed innovation to help create a society where legions of avatar robots work side by side with humans.