HANOI/BANGKOK -- Agricultural and fishing industries in Asia are being transformed by technology as the cheap and abundant labor that they long relied on erodes due to demographic pressures.

Rising wages across other industries have created a labor shortage in the traditional staples of economies, especially in Southeast Asia. To make up for a shrinking population of farmers, companies are adopting artificial intelligence and drones to help grow food more cheaply and efficiently.

In Vietnam, Minh Phu Seafood is building new vinyl shrimp tanks that are shaped like deep bowls. Water is swirled around the tank so that waste collects at the bottom where it can easily be drained. The company exports 65,000 tons of shrimp a year to 50 countries.

Conventional tank designs put entire yields of shrimp at risk should disease break out, according to Minh Phu. The cutting-edge design keeps the water fresh at all times, which prevents disease from spreading throughout the tank.

Before, the company relied upon the observations and intuition of workers, and the amount of feed and level of water quality varied from pond to pond, but now it is automating as much of the care-taking process as possible to minimize discrepancies. Minh Phu utilizes artificial intelligence to calculate the optimal amount of feed based on weather conditions and shrimp growth. Altogether, the new system is expected to be three times as productive as conventional methods. 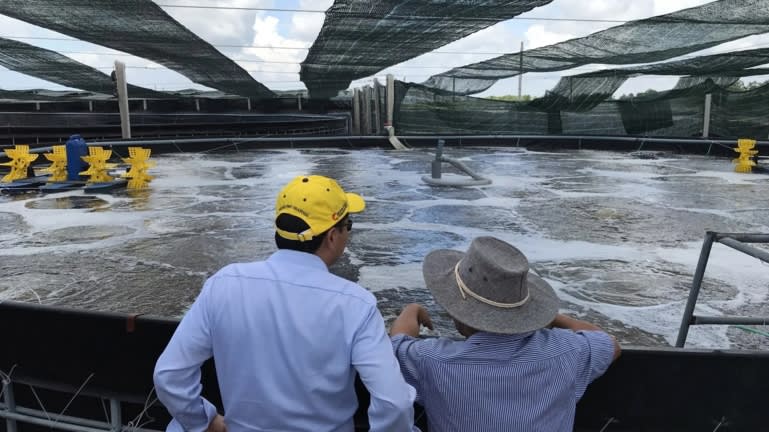 Minh Phu Seafood's new shrimp tanks are expected to be three times as efficient as the conventional approach. (Photo by Tomoya Onishi)

Japanese trading house Mitsui & Co. bought a 35.1% stake in the company in June. Minh Phu will use the funds to entirely switch to the new tanks next year, and will urge its partners to do the same.

As Asian economies develop, more people are entering the manufacturing and service industries instead of agriculture. China's farming population shrank by 80 million people between 2000 and 2010, and Southeast Asia is following a similar path.

The average monthly pay for nonexecutive workers has surged 71% in a decade in Bangkok to $413 last year, according to MUFG Bank. Ho Chi Minh City saw a 150% jump to $242. No longer able to simply throw manpower at problems, companies are relying more on technology.

Charoen Pokphand Foods, a unit of Thai conglomerate Charoen Pokphand Group, launched an AI-powered hog farm in Nakhon Pathom Province in September. Supervisors are immediately warned via the Line chat app of any unauthorized entrants into the facility. This keeps outsiders from bringing in germs on the bottom of their shoes and can be used to track transmissions in case of an outbreak, like the African swine flu epidemic decimating the hog population in China.

The system also keeps an eye on any hogs that are eating or moving less. The company is weighing introducing a similar framework at its poultry farms as well.

Installation costs -- 300,000 baht ($9,900) to cover 50 sq. meters -- will be split evenly between CP Foods and contract farmers. "I hope to have the system at every contract farmer in Thailand in two to three years," said CP Foods Executive Director Rewat Hathaisattayapong. The company could adopt the system at its operations in the rest of Southeast Asia, India and China as well.

Digital agriculture is spreading in China, too. Chinese agricultural drone maker XAG has developed machines that can spray pesticides and fertilizers, taking into account geography and wind conditions for optimal distribution. The company will also be able to use artificial intelligence to determine the best timing for harvest.

Asia is a crucial link in many food chains. China, Vietnam and the Philippines raise about half the world's pork, while China, India and Thailand grow raise about a fifth of the chicken. More than half of all shrimp exports come from Asia.

Agriculture and fisheries have traditionally lagged behind the manufacturing sector in boosting productivity. Digital advancements could help stabilize the global food supply as a whole.

But adopting cutting-edge technology is too costly for many small farmers. Asia will have a difficult time competing with advanced economies with more resources if it can no longer rely on cheap labor. Asia's farmers are aging as well, meaning increasing technological literacy among them could pose a challenge.