Blockchain will enable consumers to track who is involved in the cup of coffee they drink in Indonesia's Blue Korintji Coffee shop.
AKANE OKUTSU, Nikkei staff writerApril 12, 2020 20:04 JST | Indonesia
CopyCopied

TOKYO -- After scanning a barcode at Indonesian coffee chain Blue Korintji Coffee, paying customers can identify the farmer who grew their coffee, the company that roasted the beans and even the logistics involved.

Powered by blockchain, modern technology's answer to establishing trust among an otherwise unconnected group, the initiative is the brainchild of Singapore startup Emurgo which has partnered with Blue Korintji to create a premium product that ultimately boosts returns to farmers.

Making use of blockchain technology would help Blue Korintji differentiate its product in an increasingly competitive market where consumption has almost quadrupled since 1990, company founder Budi Isman told the Nikkei Asian Review.

Knowing which farmers made a cup of coffee, "in terms of the story, and to the consumers, is very beneficial," Isman said.

With people more willing to pay higher prices for products they can trust, Budi said Blue Korintji would also pay a premium if he could be certain which famers produced the coffee beans. As Asian tastes grow more sophisticated, and consumers show more concern for how their food is produced, including its impact on the environment and the working conditions of those involved in bringing it to the table, farmers across the region are embracing blockchain to help improve supply transparency and add value to their produce.

The United Nations' Food and Agriculture Organization (FAO) is working with Papua New Guinea pork producers to use blockchain to prove that their livestock meets international standards and helping them win access to international markets.

International charity Oxfam is also working with Cambodian rice growers to help them use blockchain technology to promote fair trade by ensuring that farmers are adequately paid and that consumers can make more informed purchasing decisions.

While the churn rate of blockchain startups tends to be high, according to FAO investment officer Gerard Sylvester, "developing expertise in one specific field [such as agriculture] will be helpful and even within that field, focusing on one important value chain will help in sustaining solutions."

Still, with many blockchain agriculture projects still in the pilot stage, challenges remain.

According to Emurgo Indonesia CEO Shunsuke Murasaki, one of the main reasons major obstacles to introducing blockchain is helping farmers understand what is in the end a very complex tool.

"It takes time to explain to them what's the benefit and what's the concept of the blockchain technology," said Murasaki. 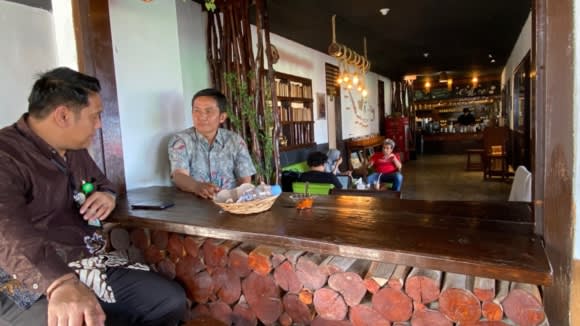 Khim Sok, a manager at Oxfam in Cambodia, said that another challenge was the fact that "a majority of farmers who do not use smartphones," and many blockchain projects were yet to establish a detailed business model.

Still, Sok added, there was no lack of enthusiasm.

"All actors in this organic rice supply chain are interested in the blockchain technology and committed to implement this project together," he said.

Earlier this year, U.S. technology giant IBM also announced the launch of an app that allows consumers to track the coffee supply chain in a partnership with leading global players Beyers Koffie, the Colombian Coffee Growers Federation, and the Itochu Corporation.

For Blue Korintji Coffee the decision to make use of blockchain technology started out of a social project to increase incomes for the 500 farmers it works with near the Kerinci Seblat National Park on Sumatra island.

Farmers and companies record their transactions on their smartphones based on each invoice which are then stored to the blockchain powered database.

Blue Korintji parent company Lembah Kerinci Developindo currently owns six coffee shops in Indonesia which turned $117,000 in 2019, is looking to triple revenues over the next three years, and capitalize on what research firm Statista calls the younger generation's "newfound appreciation for locally-produced coffee." 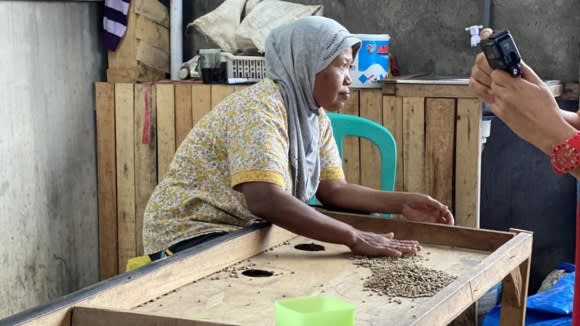 With the Blue Korintji Coffee project still in the pilot phase, Emurgo's Murasaki said his company was already in talks to sell the concept to suppliers of other in-demand commodities such as palm oil and cacao beans.

Founded in 2017, Emurgo is part of the Cardano project, centered around a blockchain platform developed by U.S. based startup Input Output Hong Kong and is linked to the technology behind the cryptocurrency Ada.

According to Murasaki, Emurgo's blockchain database could also be of use to banks and other financial institutions by providing data such as crop yields and sales needed to determine farmer credit worthiness.

With no access to such data currently, Murasaki said the end result is higher interest rates for farmers.

"Every transaction used to be paper based before this blockchain, meaning that they cannot accumulate trust," said Murasaki.

The new database, he added, would give them ways to "prove themselves."