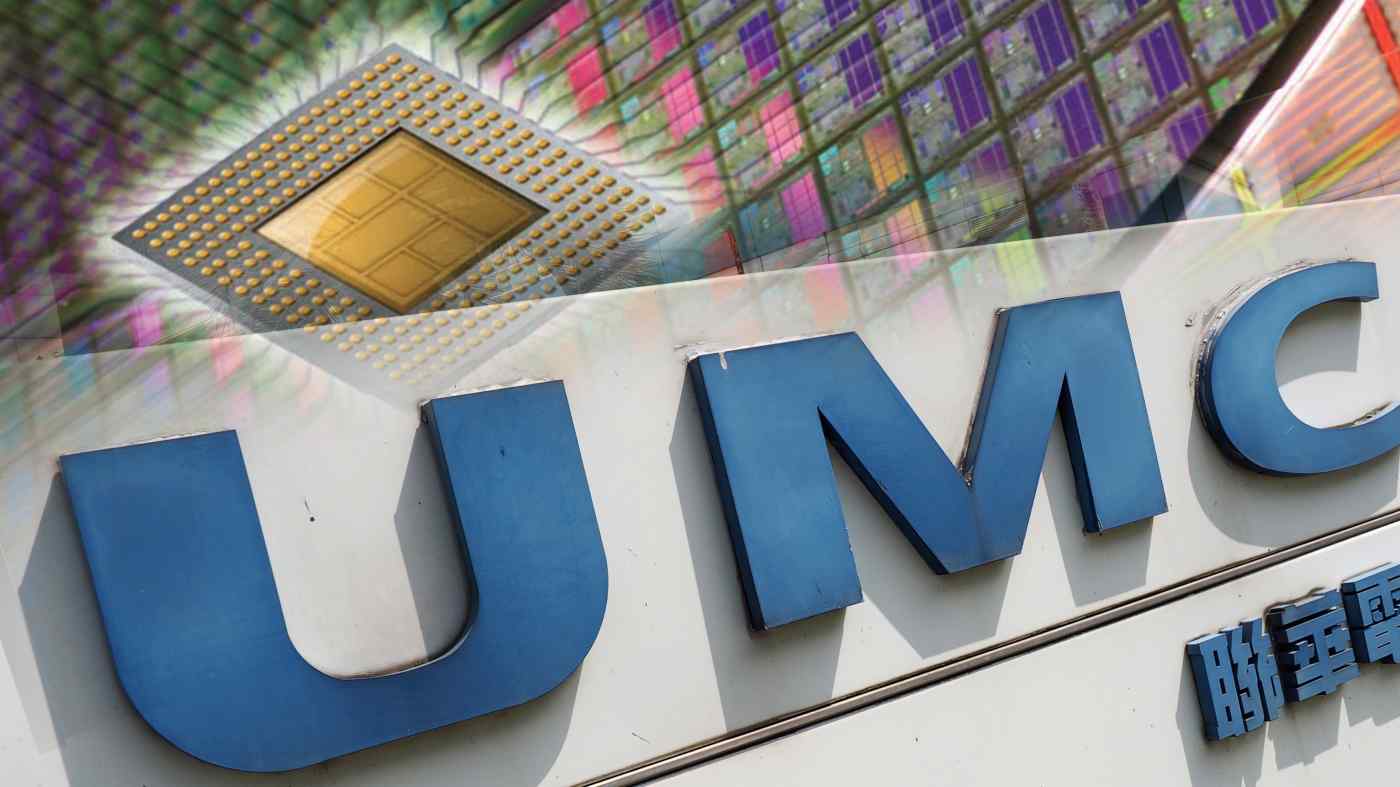 TAIPEI -- For the sales representatives at chip contract manufacturer United Microelectronics, this is usually the busiest season -- time to chase after customers and fill the order books for next year. But this year the situation is just the opposite: UMC's customers are scrambling for supplies.

Companies from Intel, the U.S. tech giant that sources manufacturing of Wi-Fi and power chips to UMC, to MediaTek, a leading mobile chipmaker, and Realtek, a key provider of Bluetooth and Wi-Fi chips, are all asking UMC for more support, two people familiar with the matter said.

"Most of the time we are begging for more chip orders and chip developers are asking for price cuts," one of the people said. "But this time even if they were willing to pay more, we do not have much additional capacity to support them."

Most of UMC's capacity is fully booked through the second quarter of next year and some is not available until the end of next year, the people said.

"It is like a hotel that is fully booked -- and it is really not likely that we could build extra rooms very soon to meet the surging demand," one of the people said.

UMC declined to comment on specific customers. Intel told Nikkei Asia in a statement: "The PC industry has seen unprecedented demand this year, driving record demand for Intel Wi-Fi products. We're constantly working with our supply chain to ensure that we can support our customers."

Mediatek and Realtek both previously said they were working with their production partners to alleviate the component shortage issues.

The boom for UMC -- the world's fourth largest contract chipmaker by revenue and whose customers also include Qualcomm and Sony -- is far from unique. Most production capacity at Taiwan Semiconductor Manufacturing Co., the world's biggest contract chipmaker, is also fully booked toward the third quarter of next year, according to two people familiar with the matter, though these orders are still subject to adjustment.

These supply constraints reflect a happy problem for the entire tech industry; stellar demand is leading to an unprecedented shortage of a wide range of components used in electronics devices, from computers and smartphones to game consoles and cars.

The scramble for parts cuts across various segments -- from basic materials like glass and substrates to semi-finished components such as displays, one of the priciest bits of many electronic devices. And it covers chips from processors and driver integrated circuits to those used for power management and connectivity -- all of which are made by companies such as TSMC and UMC and supplied to different chip developers to fulfill device-builders' demand further down the supply chain.

"It's been a long while since we witnessed such big range of component shortages... I can tell you the lead time for some of the [integrated circuits] is as long as 12 months, while for many of the components you will have to wait six to eight months if you order now," said Andrew Chen, CEO of Kinpo Electronics, which supplies Dyson, HP, and Huawei. Kinpo is a sister company to Compal Electronics, which makes Apple Watches and Dell notebooks.

The consequences are apparent in a big rise in profitability for key suppliers. America's biggest memory chipmaker Micron just raised its earnings outlook while many leading display makers -- from China's national champion BOE Technology Group to LG Display of South Korea -- reported a significant improvement in earnings for the third quarter of 2020. Micron's shares jumped to a 20-year-high last week.

TSMC's share price has surged to a record level, advancing more than 50% so far this year, while UMC's shares have more-than-doubled this year to a nearly 20-year-high.

The tech industry is one of the few sectors to have enjoyed growth during the coronavirus pandemic this year. The component shortage indicates the industry's overall optimism for a robust recovery next year in the post-coronavirus era.

"Even with the positive progress of COVID-19 vaccines, we think the 'new normal,' such as remote working, learning, fitness, entertainment, contact-free interactions and commerce, will be here to stay," said Rick Tsai, CEO of MediaTek, whose company sees record sales surpassing $10 billion for 2020.

This year's booming demand comes from a host of electronics sectors. PCs and tablets have been bouncing back since the second quarter, with sales boosted by having to work and learn from home during the pandemic. Demand is forecast to continue to grow by some 3% for 2021, according to research company IDC.

Demand for smartphones started to recover in the second half of this year and is expected to rebound some 10% next year, according to Counterpoint Research.

Take-up of 5G smartphones, which use more components than 4G handsets, is also playing a part in causing supply constraints. Apple even reallocated iPad components on the iPhone 12 range due to the shortage of power chips and lidar components used for depth-sensing imaging functions, affecting around two million units of iPad production.

Meanwhile the automotive market is projected to jump double-digits after a serious decline this year. Electric cars use a wide range of chips for connectivity, power management, data processing and storage.

"It's a rare situation for all demand to be up at the same time -- from computers, consumer electronics and smartphones to automotive applications. Everyone who builds these devices wants to secure enough parts and capacity for the recovery in 2021, while not letting their competitors get ahead," an executive with Siliconware Precision Industry, a chip packaging service provider, told Nikkei.

Frank Ko, President of AU Optronics, a leading Taiwanese display maker, told Nikkei that demand from customers exceeded supply by more than 10% -- and that the gap was growing wider.

Relief was unlikely until the second quarter of 2021, said Ko, adding that supplies were very tight for some essential components for display products, including driver chips, microcontrollers, glass and polarizers.

James Yang, president of Innolux, Taiwan's No. 2 display maker and an affiliate of Foxconn Technology Group, said: "We've excluded the scenario of overbooking and still we have positive order visibility throughout the entire year in 2021... Whenever we churn out displays in our factories, the clients take our products away immediately. There's no time to build inventories."

Shipments from MacBook maker Quanta Computer, the world's largest contract notebook maker by number of units, in the first three quarters of 2020 have surpassed the 35 million units it shipped in all of 2019. Quanta, which also supplies notebooks for HP, Dell and Chromebooks, estimates its annual shipments will reach a record of as many as 60 million notebooks this year -- more than 30% of this year's estimated global market.

"If we manage to secure more components, the number will be even higher," said Quanta CFO Elton Yang.

Meanwhile, geopolitical factors have complicated matters. When China's leading smartphone and telecom equipment maker Huawei Technologies was cut off from most of its components in mid-September because of U.S. export control regulations, its suppliers expected headwinds. But Huawei's rival smartphone makers are racing ahead to grab its market share -- and filling component suppliers' capacity. Xiaomi has been booking enough parts for up to 240 million units, nearly double its shipments from 2019 and 2020, while Oppo plans 170 million smartphones next year.

China's top contract chipmaker Semiconductor Manufacturing International Co. also faces tightening U.S. export controls and has been added to a Pentagon blacklist. The U.S. move has not yet caused serious disruption to SMIC's operations, but the uncertainties have prompted many of its customers, especially in the U.S., to look for backup chip producers -- aggravating overall supply constraints.

"SMIC's uncertainties caused a crowding out effect on the market supplies. While its peers are not expanding capacity and the end demand continues to rise, the situation is really intense," said Cliff Yuan, spokesperson and CFO of WPG Holdings, the world's largest semiconductor distributor. "Our inventory level is at a record low of 35 days and we foresee the supply shortage will extend to next quarter before starting to alleviate."