Fu-se Vacuum Forming has developed a device that applies colored film to car bodies. The simple one-step pressing process is expected to slash electricity consumption by more than two-thirds compared with the regular coating method, which involves repeating painting and drying.

Plastic films are already in use on door handles and other areas inside vehicles, but expanding the application to the outer body will expand the market dramatically. The new method also offers a solution to automakers looking to reduce environmental impact.

Japan's Kyowa Leather Cloth and U.S.-based 3M already have developed colored films that are just as functional as auto coating. But due to the size and complicated structure of outer body parts, applying the film had been a challenge -- until now.

Fu-se, located in Habikino, Osaka Prefecture, spent over 100 million yen ($946,000) to create the prototype filming apparatus, which uses three-dimension overlay method, or TOM. The film, which is first heated and softened, is brought close to the auto body surface within a vacuum. 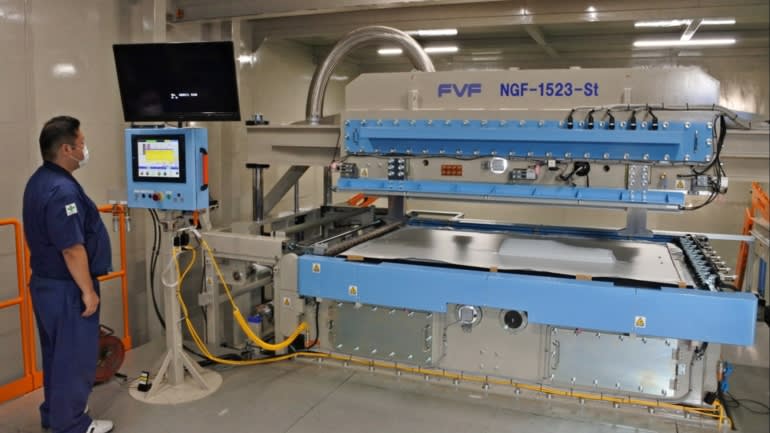 The company spent over 100 million yen to create the prototype filming equipment.

This process creates a thin layer of vacuum between the auto body and the film. When air is introduced, differences in air pressure forces the film to stick tightly to the surface. The film contains a layer of adhesive that hardens when cooled.

A sheet of film measures 1.6 meters by 2.4 meters. Film is more prone to warping during overlays the larger it gets, but those irregularities can be smoothed out by adjusting the air pressure.

The company will market its prototype filming apparatus to automakers. If a deal is reached, a device will be customized for the client. Fu-se is also considering providing technology for a fee.

A vehicle paint job normally requires repeated coating and drying, which uses large volumes of electricity. Painting a car can consume between 30% to 40% of the power used to make one vehicle.

With Fu-se's tech, the coating process is done with one overlay, limiting power usage to at least less than one-third of a conventional paint job.

The company first developed its TOM process about two decades ago to overlay film and it has shared its technology with Toyota Motor for use in interior components. The company has spent the last three years improving the technique to capture business in the auto body coating business.

But automakers have decades of experience with standard painting methods. Though the plastic film is more environmentally friendly, it will also need to be cost-competitive to overcome Fu-se's handicap as a latecomer.

Applying the film by hand costs two to three times as much as normal paint, according to Kyowa Leather, which produces the material. Even with Fu-se's new equipment, closing such a large gap will be difficult. Mass production could bring down costs further, but the film will need to be in broader use before that becomes feasible.

That said, the film can be used in a variety of ways that paint cannot. Applying it over a textured core can create dimples that reduce air resistance, much like those on golf balls. The material itself can be made heat-resistant or given the feel of wood or cloth. This added value will be crucial to persuading automakers to make the switch.

Electric vehicles offer a potential opening to break into the market, as the relatively small environmental impact of film can be used as a selling point. And if manufacturers use plastic rather than steel in auto bodies to reduce weight, film will be easier to apply than paint.