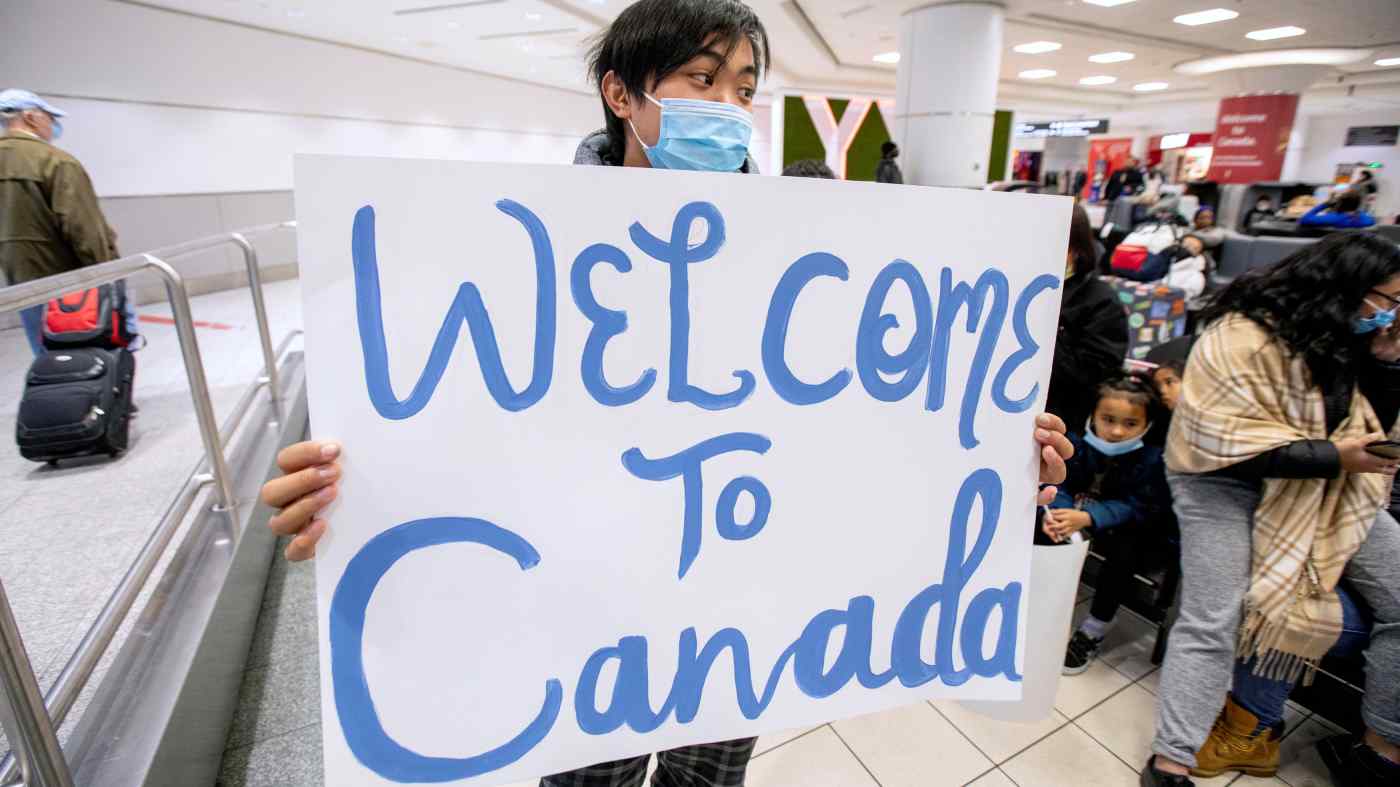 PALO ALTO, U.S. -- Just days after Donald Trump issued an executive order suspending new work visas issuances for the rest of the year, his counterpart to the north was rolling out the welcome mat to foreign talent.

"If you don't want to go to the [U.S.], come to us, we will take you," Canadian Prime Minister Justin Trudeau told audiences of the online Collision tech conference last month.

Canada, like many countries with ambitions of fostering their own vibrant tech hubs, is attempting to attract highly skilled professionals with a friendly immigration system -- and conditions in the U.S. could prove to be their most powerful recruiting tool.

"If you want to bring someone in to work in your company at a certain high-tech job or a high-value job, we'll give you a visa in two weeks to get them to come in," Trudeau said.

"Regardless of what happens in the United States, Canada continues to be welcoming and excited about people coming to Canada."

Lu plans to move to Canada in two years and while he is already fluent in English, taking the IELTS is one of the requirements for acquiring permanent residency in the country.

Having studied in the U.S. since he was 14 and now living there on an H-1B work visa, Lu said he had always planned to stay in the country for the long run. Recent news, however, has made his plan seem "unrealistic."

"The most recent executive order so far only affects me on traveling, as I can't leave the country or I won't be allowed back. But who knows what kind of policy will come out if Trump gets reelected this year. By then I might be forced to leave the country," he said.

Lu's original plan, like many who are in the country on a work visa, was to apply for U.S. permanent residency -- known colloquially as a green card -- so he would not have to worry about renewing his visa every year. But with the likelihood of getting a green card growing slimmer, Lu said he has been exploring his options.

"Canada seems very attractive now with its fairly easy immigration process and large Asian immigrant population. ... Plus the time difference and flight distance between Canada and California is not bad, so I can continue to work for my current company," he said.

Lu is not alone. A growing number of Asian tech workers are considering leaving the country, willingly or unwillingly, especially after the U.S. suspended immigration processes in April and then H-1B and other work visa issuance in June. The latter move was especially unnerving for Asian communities.

More than 420,000 people applied for the 85,000 available H-1B work visas in fiscal 2019. Nearly three-quarters, or 74.5%, of applicants were born in India, followed by mainland China at 11.8%, according to data from the U.S. Citizenship and Immigration Services.

In a recent survey by Blind, a social network for tech professionals, of 1,145 workers who are on H-1B visas and potentially impacted by the recent executive order, 34% plan to look for a job in a new country, while 24% said they will return to their home countries, according to data provided by Blind.

Among those seeking new opportunities outside the U.S., 39% said they are looking at North America, namely Canada.

"We have had a dramatic increase in calls and inquiries from software engineers in the U.S. after the recent executive order was announced," said Irfhan Rawji, founder and CEO of MobSquad, a company specializing in relocating tech workers from the U.S. to Canada.

According to Rawji, the trend of people relocating from Silicon Valley to America's northern neighbor is not new, as the issues around securing U.S. work visas or permanent residency have been around for decades. But recent anti-immigration sentiment and policies, especially increasing racism toward Asians amid the COVID-19 pandemic, have accelerated the trend, said Rawji.

"In the U.S., the number of years it takes to get a permanent residency could be 20 or 30 years because it's limited on a yearly basis by country of origin," Rawji said. "We get all of our software engineers permanent residency in Canada in 12 months or less."

The much more streamlined immigration process for tech workers is largely due to government support, most notably in the form of a program called the Global Talent Stream, which fast-tracks the entry of foreign workers with specialized skills.

Thanks to such support, major U.S. tech players, including Google, Facebook, Twitter and Amazon, have set up sizable offices in Canada so they can hire more foreign workers without having to worry too much about visa issues.

Quebec, Canada's leading province for tech employment, accepted over 5,000 temporary work permits for computer and software engineers, programmers and designers in 2019, a 37% increase from the previous year.

Canadian tech companies, meanwhile, have jumped on the opportunity to poach more talent from Silicon Valley.

"If [Trump's executive order] affects your plans, consider coming to Canada instead. ... If getting to the U.S. is your main objective, you can still move on south after the H-1B rules change. But Canada is awesome. Give it a try," Tobi Lutke, CEO of Ottawa-based e-commerce platform Shopify, tweeted on June 23. Toronto (above) is a fast-growing tech market, while Quebec last year stepped up approvals of work permits for tech workers.   © Reuters

Several other executives and officials made a similar pitch, including Twitter Chairman Patrick Pichette, a Canadian.

"A message to all you H-1B seekers; just look to the North, where we welcome you (and your family) with open arms ... Did I mention free healthcare? Welcome to Canada," he tweeted on June 22.

Warm as such welcomes may be, however, it could take some time before the job scene fully catches up.

"Silicon Valley is the number one opportunity area for innovation workers in the world, that's just the fact," Rawji said. "But more and more companies are porting jobs from Silicon Valley to Canada, because they can't get people to work in New York or San Francisco because of visa issues and Canada is the solution."

But Canada is not the only country hoping to benefit from tech professionals seeking alternatives to the U.S. Nearly 30% of respondents in the Blind survey said they will look for opportunities in Asia if they have to leave the U.S. due to visa issues.

Wang Qing, a 29-year-old Shanghai native, is returning to her hometown in July after accepting a job offer at a Chinese fintech startup.

With a masters degree from the University of California, Berkeley, and years of experience at Google and Facebook, Wang also received several, better-paying job offers in Silicon Valley. Wang, however, was determined to go back to China, and is leaving as soon as she can find a flight home.

"I haven't left the U.S. for almost three years because I'm constantly worried I might not be allowed back. ... At this point, I no longer feel like I'm working in the U.S. but more like I'm imprisoned here," Wang said.

Wang's work involves artificial intelligence, a sensitive field that the U.S. subjects to extra scrutiny due to national security concerns, which makes it particularly difficult for her to obtain a U.S. visa. She said she has been questioned at length by customs officers several times when re-entering the country. Her current work visa expires next year and "it will take a ridiculously long time for me to get a new visa, if it is approved at all."

A major factor in her decision to go home, she added, is that she does not want to "deal with the visa nightmares anymore."

With more foreign-born tech talent -- especially those specializing in cutting-edge fields like AI -- returning to their home countries, the U.S. could lose some of its edge in innovation while countries like China and India gain ground.

Recent research by think tank MacroPolo found that 69% of AI researchers working at U.S. institutions received their undergraduate degrees from another country. Graduates from Chinese universities made up 27% of AI-related workers in the U.S., the highest share of any foreign country.

"The suspension of the H-1B visa program is bad for the U.S., bad for innovation, and will shatter dreams and disrupt lives," Andrew Ng, one of the most prominent AI researchers in the world, said in a LinkedIn post. As a former H-1B visa holder, my heart goes out to all the families affected." The Chinese-American Ng used to head Google Brain, the search engine giant's deep-learning research team, and is now founder and CEO of Laning.AI.

Even people who do not need to worry about visas are thinking about leaving the U.S.

"The H-1B executive order does not affect me directly, but it signals the administration's attitude towards immigrants, which makes me feel unwelcomed," said Sam, a Chinese national who is working for an international organization in New York on a diplomat visa.

There are concerns that such trends will only continue, even as other countries open their doors wider to foreign talent.

"The [executive] order hints at more immigration restrictions to come, although additional restrictions will not likely be issued through an executive order," said immigration and employment lawyer Rebecca Bernhard, a partner at international law firm Dorsey & Whitney.

For Alex Lu, the software engineer in San Francisco, the damage has already been done.

"Trump refusing to stop calling COVID-19 'Chinese flu' and suspending H-1B is the last straw for me. ... Now I actually want to leave the country," Lu said.