HO CHI MINH CITY -- The coronavirus pandemic is fueling a boom in Vietnam's online learning market, and Swedish startup Astrid is taking lessons from the world of mobile gaming to grab a slice of it.

The company developed its English-learning app, also called Astrid, with help from some of the minds behind Candy Crush, the series of puzzle games that became a global phenomenon. The result: A cheerful and engaging interface rewards users for progress and encourages them to keep playing.

But Astrid faces formidable competition in Vietnam, its first Asian market. Local incumbents include Yola and Google-backed Elsa, both founded by Vietnamese alumni of Stanford, while international players like Duolingo are also making inroads.

"A lot of what people try is to balance between gamification and learning -- and many have failed. That's why we brought the King guys in," he said, referring to the company that developed Candy Crush.

In addition to former King executives, Astrid's advisory board also includes alumni of the music streaming service Spotify. King co-founder Sebastian Knutsson has invested in Astrid, and the startup hired John Almbecker, who helped bring Candy Crush to the U.S. and spin off several games, to serve as its vice president of product.

Demand for English lessons in Vietnam is high. The country sent 23,777 citizens to study in the U.S. in the 2019-20 school year, according to the U.S. government-funded Open Doors. That is more than all three of Southeast Asia's next-biggest sources of outbound students -- Indonesia, Malaysia and Thailand -- combined.

COVID lockdowns, moreover, have been a boon for education technology, including among students and parents who used to say that if they were going to spend money on instruction, it should be in person.

"Mobile infrastructure is there, and people are more used to paying online," Ngo said.

There is also a need for greater English proficiency in a country where public schools equip pupils with the ability to ace international math tests but not with the language and critical skills that companies demand. Vietnam "needs to improve labor productivity through better education" and training, HSBC wrote in a February report.

Parents are spending accordingly. Yola found that Vietnamese spend up to 30% of their disposable income on education, even in poor families.

In December, the nonprofit Center for Global Development assessed how the pandemic could affect education finance in 80 countries. It projected that spending may fall in most places but jump 7% in Vietnam in 2021, the highest in the world except China. 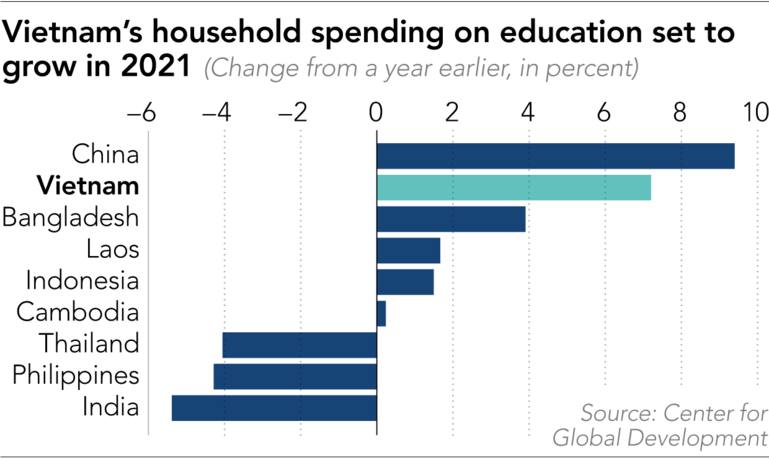 Much of that spending goes to private English classes, which Astrid views as its main competition. It is trying to win over students with monthly subscriptions priced around $10 to $15. The company -- which raised a total of $5.3 million, including a $4 million seed round last month -- aims to expand into China, India and Indonesia.

Astrid is not the only app gamifying education. Duolingo users set their own goals and get points for reaching them, such as hitting a 10-day streak of using the app.

And like Duolingo, Astrid makes heavy use of artificial intelligence. Co-founder John Kristensen said his company researches AI and uses it to listen to users' voices and recommend exercises based on their profiles.

"We pick up that you're struggling with a specific sound," he said. "Then we automatically adapt."

Kristensen spoke to Nikkei Asia in two video calls from Stockholm: one with his fellow co-founder, the other while walking past an amusement park. He stressed the aim of Astrid is to make learning fun and engaging, drawing on the advice of the Candy Crush alumni.

The lesson from King is to amass data and then design products around that, not around what a developer would enjoy playing, Kristensen said. For Astrid, this means using AI to collect data on user preferences and problem areas. It said it will use the data to craft future exercises, including content for its storybook.