China and Thailand leap up in innovation capability ranking

TOKYO -- Asian economies are climbing up the ranks of global innovation, with Singapore reaching the top five and China cracking the top 20 for the first time in this year's annual Global Innovation Index released Tuesday. The improvements reflect vigorous government efforts as well as socio-economic development in the region.

The index, calculated from 80 different indicators, shows each economy's ability to innovate new technologies and put them to use. The report was co-published by Cornell University, business school Insead and the World Intellectual Property Organization, an agency of the United Nations. Switzerland topped the ranking for the eighth consecutive year.

Singapore moved up two places from the previous year to fifth. It scored high in indicators such as government effectiveness and foreign direct investment outflows. South Korea moved one notch down to 12th, while Japan, Hong Kong, China and Australia all climbed into the top 20.

China, which joined top 25 in 2016, rose rapidly to rank 17th. This indicates improvements in several factors, including high-tech imports and quality of publications, according to the report. The country was ranked first or second in terms of research and development expenditures and the number of researchers, patents and publications. 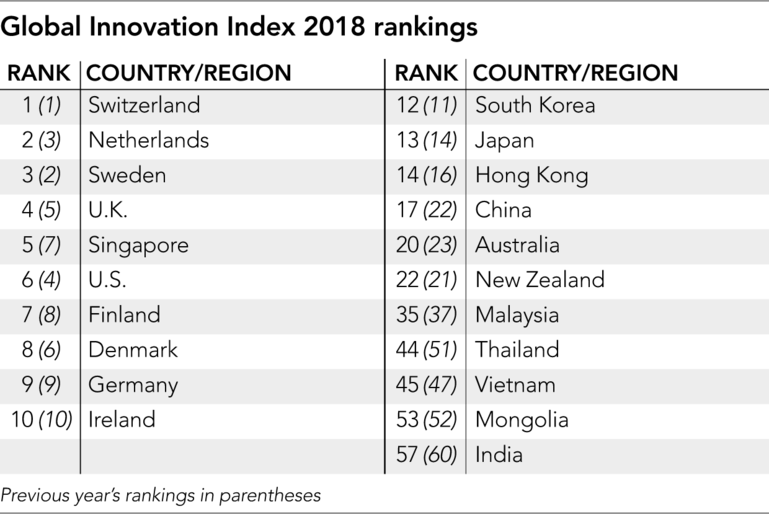 The report also addresses "clusters," areas with particularly intense activity in science and technology. China had the second-largest number of clusters after the U.S., which had 26 clusters. The Shenzhen and Hong Kong area formed the second biggest cluster in the world, with ZTE being the top patent applicant. Beijing came fifth, with research and patents led by Chinese Academy of Sciences and internet of things company BOE Technology Group.

The world's highest ranked cluster was Japan's Tokyo-Yokohama area, with the University of Tokyo and electronics manufacturer Mitsubishi Electric being the major contributors.

Overall, Southeast Asia, East Asia and the Oceania region showed the most progress compared to other regions, driven by the Association of Southeast Asian Nations. ASEAN progressed in innovation and socio-economic development indicators, according to the report. Malaysia and Vietnam moved up two positions, and Thailand jumped up seven positions to reach 44th.

Malaysia, which ranked 35th, showed increases in most indicators, including human capital and research, infrastructure, and business sophistication. Among ASEAN countries, Vietnam came first in expenditures on education and trademarks by origin, while Thailand had high tertiary enrollment.

In the central and southern Asia region category, India moved up three places to rank 57th in the world, outperforming on innovation relative to its per capita gross domestic products for the eighth consecutive year.

This year's GII report was themed "energizing the world with innovation," emphasizing the need for innovation in meeting growing energy demand and environmental concerns. According to the report, energy-related patenting has stagnated in recent years since the peak in 2012, declining in the areas of nuclear power and renewable energy technologies.

While India and China leads innovation in applications of photovoltaic technologies to generate solar energy, the report pointed out that innovation is weak in energy storage and transmission technologies, which are vital in utilizing and distributing power.

The GII compiles profiles of 126 countries and regions, based on data, composite indicators and survey questions.