SINGAPORE -- China-backed e-commerce retailers Shopee and Lazada appear to be extending their lead in the race for Southeast Asia's online consumers.

Data compiled by cost-comparison platform iPrice and web analytics firm SimilarWeb indicate that the two Singapore-based online retailers, which are backed by China's Tencent and Alibaba Holdings, grabbed 60% of the region's e-commerce web traffic in the three months to December.

With Southeast Asia's digital economy expected to be worth $300 billion in 2025 according to a joint study published last year by Google, Singapore state investor Temasek and U.S. consultancy Bain & Company, the stakes are high.

"Companies looking to tap into this opportunity need to recognize that a one-size-fits-all approach won't work in Southeast Asia, the region boasts a tapestry of varying consumer behaviours in every market," Worldpay's General Manager for Global E-commerce Phil Pomford told the Nikkei Asian Review.

Prominent Indonesian startups Tokopedia, backed by Japan's Softbank, and homegrown unicorn Bukalapak, were the third and forth most popular ecommerce platforms in terms of web traffic, but their market share appears to be slipping.

Shopee accounted for 33% of e-commerce web traffic across Southeast Asia in the three months to December last year, according to the data complied by iPrice and SimilarWeb, followed by Lazada with 27%.

"There is great opportunity for Tokopedia to catch up to the top spot as the Indonesian Internet Providers Association revealed in June 2019 that 56% of internet users have never made e-commerce transactions," an iPrice spokesperson told Nikkei. 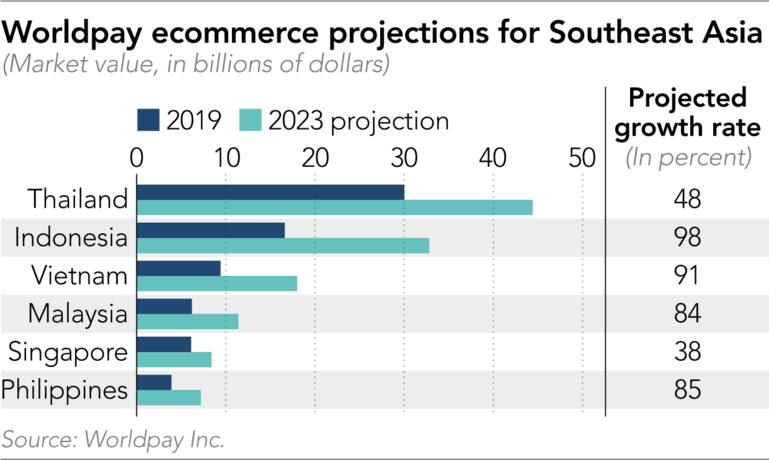 The dominance enjoyed by the top four platforms stretches back to 2017, with Vietnamese players such as The Gioi Di Dong and Sendo managing to win only single-digit percentages in that time when it comes to e-commerce web traffic.

Shopee, which attracted just 7% of e-commerce web traffic in the third quarter of 2017, behind Bukalapak's 9%, Tokopedia's 14%, and Lazada's 48%, has built its lead by employing a range of innovative marketing campaigns.

Last year Shopee touted savings of up to 90% for shoppers during the Singles Day e-commerce promotion, using Real Madrid football star Cristiano Ronaldo as a brand ambassador and throwing in free-shipping.

Still, the top-tier e-commerce platforms are facing increased competition from a number of up-and-comers.

According to mobile tracking firm App Annie, Vietnam's Sendo, San Francisco-based Wish, and Singapore's Zilingo have gained significant traction in Southeast Asia and are now among the most-downloaded mobile platforms with smartphone users.

What could really give the edge to e-retailers in the quest for dominance is an online shopping experience that doesn't suffer from time lag when consumers browsed for products, said Edwin Koh, digital content director for Southeast Asia at digital media solutions provider Limelight Networks.

"Improving customer-facing interface as well as infrastructure to ensure scalability, performance and security are key considerations for e-commerce players looking to retain customers."