SHANGHAI -- China's online shopping surge has compelled some overburdened companies to bring in robots and drones as a possible solution to the challenge of increasingly scarce and expensive delivery personnel.

Nov. 11, the date known popularly as "Singles Day" for its succession of 1s, has been turned into an e-commerce spectacle in China in recent years. Market leader Alibaba Group Holding handled transactions worth 168.2 billion yuan ($25.3 billion) on that day alone this year, which roughly equals top Japanese e-tailer Rakuten's full-year business. But with around 1.5 billion packages to deliver, plus returns and repeated delivery attempts to consider, China's logistics sector could be paralyzed for nearly a month after this year's spree.

Signs of strain were already visible the next morning. Piles of cardboard boxes -- purchases from the previous day's online shopping extravaganza -- were seen choking the entrances of Shanghai's apartment and office buildings.

Much of the shippers' burden comes from the so-called last mile between the final distribution center and the recipient's doorstep, and so some companies have started exploring ways to use machines to change the situation. 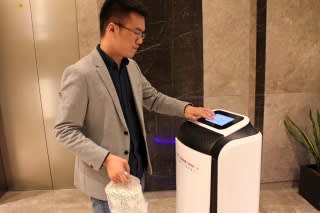 Since October, robots have been stationed at several Chinese office buildings, courtesy of Shanghai Lazhasi Information Technology, which owns and operates the Ele.me food delivery service.

The cylindrical robots with no hands wait at the lobby. Once a delivery worker arrives with a meal or a beverage, the robot lets the worker place the item inside by opening a door on its body. It then hops an elevator to the appropriate floor and notifies the recipient by phone that the order has arrived. Entering one's cellphone number gives access to the food or drink inside, freeing up the robot to return to the lobby and wait for the next delivery.

Shanghai Lazhasi aims to introduce more robots to lower labor costs in the delivery process, according to Yu Lixin, who heads development at the company.

JD.com, China's No. 2 e-commerce business, is exploring ways to cover even longer distances with minimal human help. The company has introduced drone delivery in areas such as Shaanxi and Jiangsu provinces since June 2016, and operates around 40 of the unmanned aircraft in Suqian, a city northwest of Shanghai.

The drones carry packages from a distribution center to agricultural areas more than 10km away. Human workers currently handle the final step, bringing parcels to recipients' homes. But even that work likely will go to drones in the future.

The scheme has speeded deliveries in the area, eliminating the need to drive half an hour to the supermarket for daily necessities, one Suqian resident says. Though drone delivery remains experimental, a representative for JD.com said the company hopes eventually to expand the service in farm regions, where sparse orders and poor road access traditionally make service time-consuming and costly to provide.

The need for more efficient delivery is only growing. China's online shopping market tripled over five years to 22.97 trillion yuan in 2016. The market for food and beverage delivery services that take orders over the internet grew fivefold over the same period to 166.2 billion yuan. Both figures continue to swell rapidly.

Demand for delivery staff has outstripped even the large supply of low-wage migrant workers in China's major cities, driving up labor costs as companies compete for employees. Meeting labor needs with robots and drones instead of human workers could prove crucial for many logistics businesses.

Yet regulation and technological hurdles may prevent these solutions from catching on as quickly as companies hope.

Commercial drone use in China requires permission from regional governments under stricter rules introduced earlier this year. But most regions are reluctant to approve the introduction of technologies that have no track record, creating a formidable barrier for cutting-edge efforts.

Companies such as Shanghai Lazhasi are thought to be mulling a greater role for robots and self-driving cars in delivering restaurant food to customers, but they face challenges in crafting systems that are easily used by delivery workers while also resisting theft and interfacing with existing online order systems.

Unless drone- and robot-based delivery can reach a wider area, companies will have difficulty producing the devices at an economical scale. Until the necessary logistics networks can be established and robotics technology advances, humans seem still to have the edge.