TOKYO -- China's Inspur, the world's third-largest maker of servers for managing data, has gained a foothold in Japan, bringing fresh competition to local players Fujitsu and NEC in a $5 billion market.

Inspur recently set up a new Japanese unit with an investment of roughly 1 billion yen ($9.3 million).

The move, which comes amid a surge in data usage as Japan shifts to telework and at-home entertainment in response to a nationwide coronavirus state of emergency, has the potential to transform the competitive landscape. Amazon.com is among the companies looking to add data center capacity in Japan.

Inspur's AI servers "cost at least 20% less than American rivals," an executive at the Japanese arm said. The group achieves this through factory automation.

Inspur held an 8.7% share of the global server market last year, according to market research firm IDC, putting it in third place, behind American rivals Dell and Hewlett Packard Enterprise. 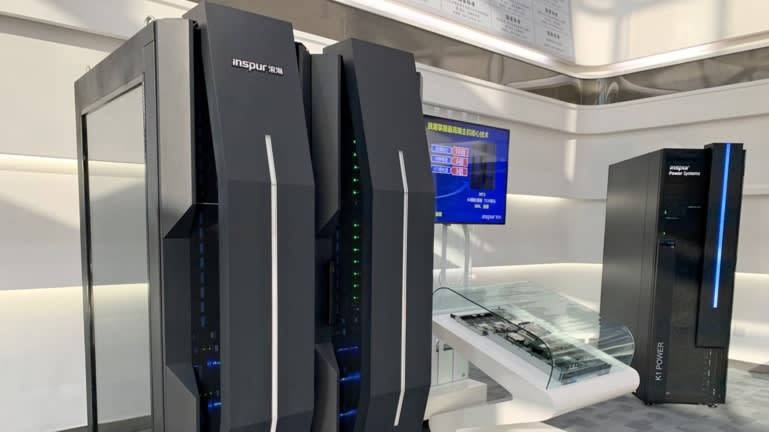 Inspur servers on display at a company showroom in China's Shandong Province.

Inspur's precursor was founded decades ago, but the current incarnation attained rapid growth largely within the past decade by supplying servers to Chinese tech powerhouses Alibaba Group Holding and Tencent Holdings.

Though the Chinese market accounts for about 90% of its sales, Inspur has in recent years jointly developed products with such clients as Microsoft. It aims to take the global lead in server shipments by March 2023 and raise its share of overseas sales to around 15% from the current 5% or so.

Inspur has built up a manufacturing presence in the U.S., where it assembles critical components supplied by the likes of chipmakers Intel and Nvidia. Japan has been positioned as a key market as well.

Off-the-shelf servers are becoming commodified, but Inspur also builds customized servers for major clients. The products to be sold in Japan will boast advanced graphics processors from Nvidia. The faster processing speeds will be put to use in image recognition and the development of automated vehicles.

Global data usage is expected to balloon with the spread of 5G communications, along with rising demand for ultrahigh-definition video. Internet use has increased as workers and students stay at home to guard against COVID-19.

"Data center operators' appetite for investment has been whetted as data traffic rises amid the pandemic," said Akira Minamikawa, head of Japanese electronics research at U.K.-based Informa. A semiconductor-industry executive said that "Microsoft and Amazon are aggressively buying memory."

In Japan, weekday data volume at Nippon Telegraph & Telephone arms NTT East and NTT West rose as much as half during the day in the week of April 20, compared with late February.

Non-Japanese data center companies are scrambling to secure market share here. Amazon.com looks to expand its Amazon Web Services availability zones for the Osaka region next year. The goal is to minimize latency times when using the cloud data service.

U.S. companies Digital Realty Trust and Equinix, which operate data centers for cloud providers under contract, are ramping up investments in Japan. Domestic data center floor space is projected to grow 4.6% a year through 2024, according to IDC Japan.

Server revenue in Japan came to 515.6 billion yen last year. Japanese server suppliers have not yet moved to expand, though demand is on the rise. Fujitsu, which holds the largest domestic market share at 25%, has seen orders double the normal volume since March for systems that control computers remotely.

For runner-up NEC, inquiries for telecommuting systems grew more than sevenfold by the end of March. Demand from corporations for servers and other equipment is expected to grow.

Fujitsu guarantees its servers to work in environments at a temperature of 40 C. Data centers can thus run normally with little air conditioning, it says. This addresses a major problem with graphics-processor-loaded servers, which normally guzzle power and generate heat.

While demand for servers is high, the coronavirus risks putting production of components behind schedule in Southeast Asia, a key supply base. Taiwan-based TrendForce projects global server shipments to grow 5% in 2020 if the pandemic subsidies in the second half but only 3% if it drags on.