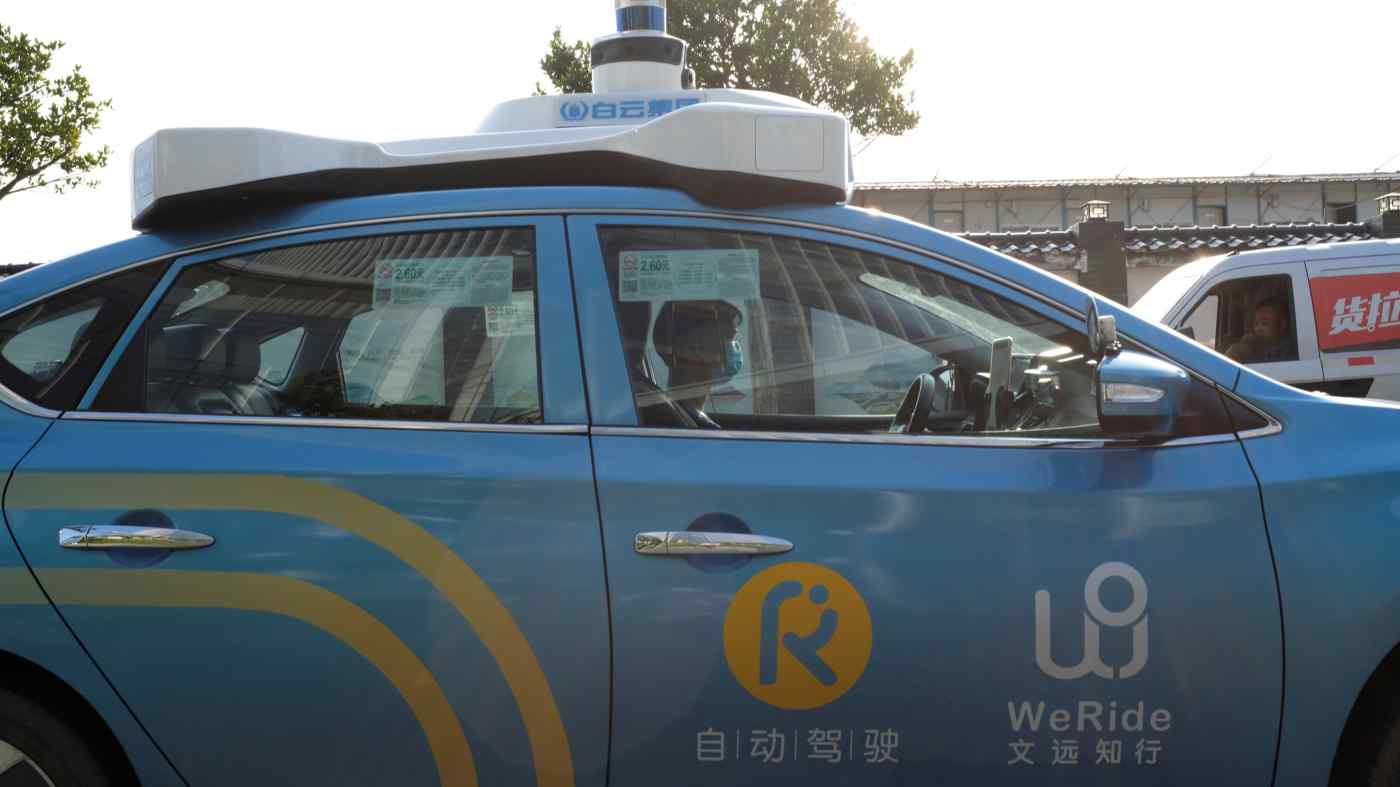 China's WeRide will be only the second autonomous driving company to test its vehicles on the open road, behind Google's Waymo.   © Reuters
NIKKI SUN, Nikkei Staff writerJuly 10, 2020 18:31 JST | China
CopyCopied

WeRide, backed by an auto alliance formed by Renault, Nissan Motor and Mitsubishi Motors, said it is testing about 10 cars in a limited area in the southeastern city of Guangzhou, with the help of people at the company's control center.

WeRide, founded in 2017, would also be the first company in China allowed to remove a human from the driver's seat, which, up to now, has been a government safety requirement. The company obtained a permit to operate the vehicles by remote control from authorities in Guangzhou this month. However, WeRide will keep a test controller inside the cars, usually in the back seat, during testing.

"Achieving full autonomous driving is an important goal for WeRide in the next two to three years," CEO and co-founder Tony Han said. "I am confident that WeRide will become the first company to provide reliable full self-driving robotaxi services to the public."

A 5G-enabled remote control system in the test cars allows them to be operated remotely in unusual traffic conditions, the company said in a news release. Previously, a backup driver in the car would switch off the auto mode and step in if needed.

WeRide will keep a driver in the car to help monitor the its operation, and stop it if necessary using a rear-seat brake, a company spokesperson said. Most of the testing will be conducted on roads with speed limits of no more than 40 kph.

WeRide's aggressive push toward fully autonomous driving -- which industry insiders expect will take five to 10 years to complete -- comes as competition heats up in the sector this year. Front-runners, including Pony.ai, Baidu and AutoX, have all launched robotaxi services and are seeking funds and partnerships with established companies to stay in the game.

WeRide, whose investors also include SenseTime and ABC International, an investment arm of Agricultural Bank of China, rolled out robotaxi service in Guangzhou at the end of last year. The fleet has expanded to 100 vehicles, the company said.

However, industry insiders have raised concerns about the safety of fully autonomous driving on open roads, and some question the significance of the tests.

WeRide said most of its tests were being conducted in a zone measuring about 1.83 sq. kilometers in Guangzhou that is fully covered by 5G signals. This helps reduce the average latency -- a measure of network delay -- for WeRide cars to 13 milliseconds, according to the company. Less latency means a driverless car can respond more quickly.

"If the vehicle can establish a good record of driving safely on a small stretch of open road, maybe one with a relatively low speed limit that is not so heavily trafficked, then the company can convince the authorities and the public to allow a further trial, this time on a slightly larger stretch of road, or one that is marginally busier, or [that] has a slightly higher speed limit," he said.