TOKYO -- When Daisuke Sasaki quit Google to start an accounting software company in 2012, he struggled to find investors who would back his idea: that small businesses would ditch traditional packaged software for a tool delivered through cloud computing, a business model now widely known as software-as-a-service, or SaaS.

"Japanese venture capital funds did not believe in cloud or SaaS models," he recalled in an interview. "They said, 'Others failed in the past. Why would you succeed?'"

Eight years later, Freee -- where Sasaki still serves as CEO -- has become a symbol of the surging interest in Japan's SaaS industry in light of the pandemic.

The company's stock price has tripled since an initial public offering in December 2019, giving it a market capitalization of $4.8 billion as of Jan. 6.

Freee is not an exceptional case. SaaS providers now dominate the Tokyo Stock Exchange's Mothers' market, accounting for seven of the top 10 most valuable companies by market capitalization. In private markets, SaaS startups have become the hottest target in Japan for venture capital funds.

The boom represents high hopes that this new generation of tech companies will finally crack Japan's digital services industry. Despite being the world's third-largest economy, Japan has fallen behind China, India and some parts of Southeast Asia in the adoption of digital technology.

"Japan has a very large economy. But from a digital perspective, it is perhaps a decade behind China," said Daniel Jacobs, founding partner at Kora Management, a New York-based investment fund with $1.7 billion under management. "So when we saw the digital economy of Japan emerging ... we got excited." 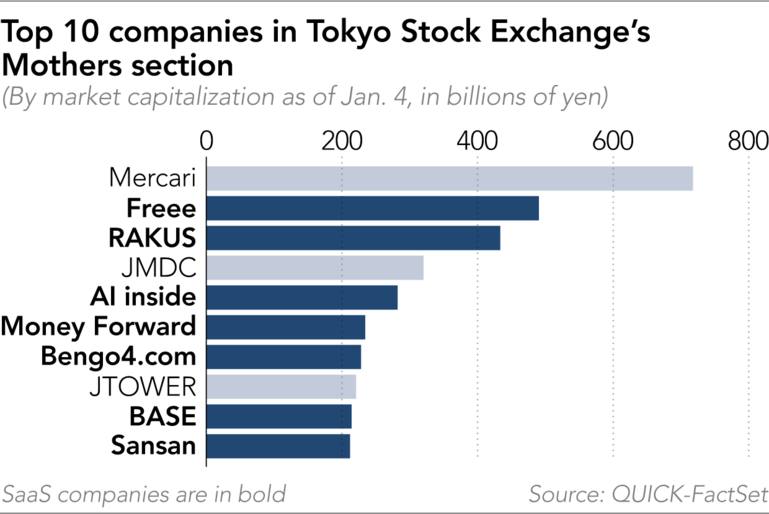 Signs of Japan's digital shift are popping up from all corners of industry. The government has begun eliminating the use of hanko personal seals, widely used in Japan in place of signatures, on administrative documents. Companies that adopted remote working suddenly needed substitute software for paper shuffling. About 40% of companies are working on "digital transformation" projects, according to a survey by the Information-technology Promotion Agency.

Such trends are driving investors such as Kora, which is also a backer of Singapore's Sea and China's JD.com, to Japan. Kora has been conducting research on Japan for years and bought shares in Freee when the company held its initial public offering. Last year it increased its ownership to more than 5%, according to regulatory filings, and opened an office in Tokyo to expand its research.

Freee sells accounting software that can be accessed through a web browser or smartphone app. It offers a monthly subscription service, enabling it to tap into small businesses without the budget or know-how to manage complex software packages. Sasaki said the service initially spread by word-of-mouth through tech-savvy users on the internet, before attracting a wider audience.

Freee recently struck a deal with a local bank in western Japan's Kagawa Prefecture to offer its software to the bank's 11,000 corporate customers, 75% of which have 15 or fewer employees. Sasaki speaks to Nikkei Asia last December in Tokyo: The accounting software developer's stock price has tripled since its IPO in December 2019. (Photo by Manami Yamada)

The company also raised large sums as a private company -- and went public before it turned a profit -- a contrast to the small but profitable nature of a typical tech IPO in Japan.

Along with Sansan, a name card management software company that went public around the same time, it demonstrated that a loss-making Japanese SaaS company could appeal to a broad base of investors.

That has sparked excitement toward SaaS products that can digitize other functions of a company, like human resources and marketing. Three Eight Roads-backed SaaS companies went public in December including Plaid, which sells software that collects and analyzes customer data. The company drew strong interest from U.S. investors during its IPO, and had a market value of $1.2 billion as of Jan. 6.

"Japan was considered a laggard in terms of technology," said Kenta Kurahashi, Plaid co-founder and CEO. "I think that is why SaaS companies like us are attracting interest."

Among the other big winners in the stock market have been AI Inside, which uses artificial intelligence to scan paper documents, and Bengo4.com, which sells electronic signature software.

At the same time, some of the hefty valuations are raising concerns that expectations are running ahead of reality.

Seiichiro Iwamoto, a veteran tech stock picker at Asset Management One, points to Fan Communications, an affiliate marketing company -- posting advertisements on websites to earn commission -- as a cautionary tale. Investors were excited that users were joining its service to generate affiliate revenue, but many of them stopped using the service after realizing that earning money was hard. The company's shares now trade at around a tenth of their peak in 2014.

"It's an old business model, but the idea is similar" to some SaaS companies that lure first-time users by giving out lavish promotions, Iwamoto said. He pays close attention to churn -- measuring the percentage of the service's subscribers who stop using the service -- three years after signing the initial contract.

Another indicator is whether companies have a strategy to survive what analysts expect will be a race to become a "platform" that can handle multiple functions within an organization, meaning players currently in different segments will eventually become competitors. "We were only in accounting, but it's natural for different functions of a company to be connected," said Freee's Sasaki.

While stock prices may face volatility in 2021, advocates see the long term adoption of SaaS as inevitable. "As a trend, and a way to keep continuing to build more efficiency into every industry, I can't imagine it going away," said Milstein of Eight Roads. "This is Japan. We're running out of people. We need that efficiency. How would a mobile phone carrier or ship construction company take advantage of SaaS? [There are] so many ways. It's really up to our creativity and the creativity of the entrepreneurs to figure out where that next opportunity is."