Coach of the year: Pingpong robot knows how to motivate 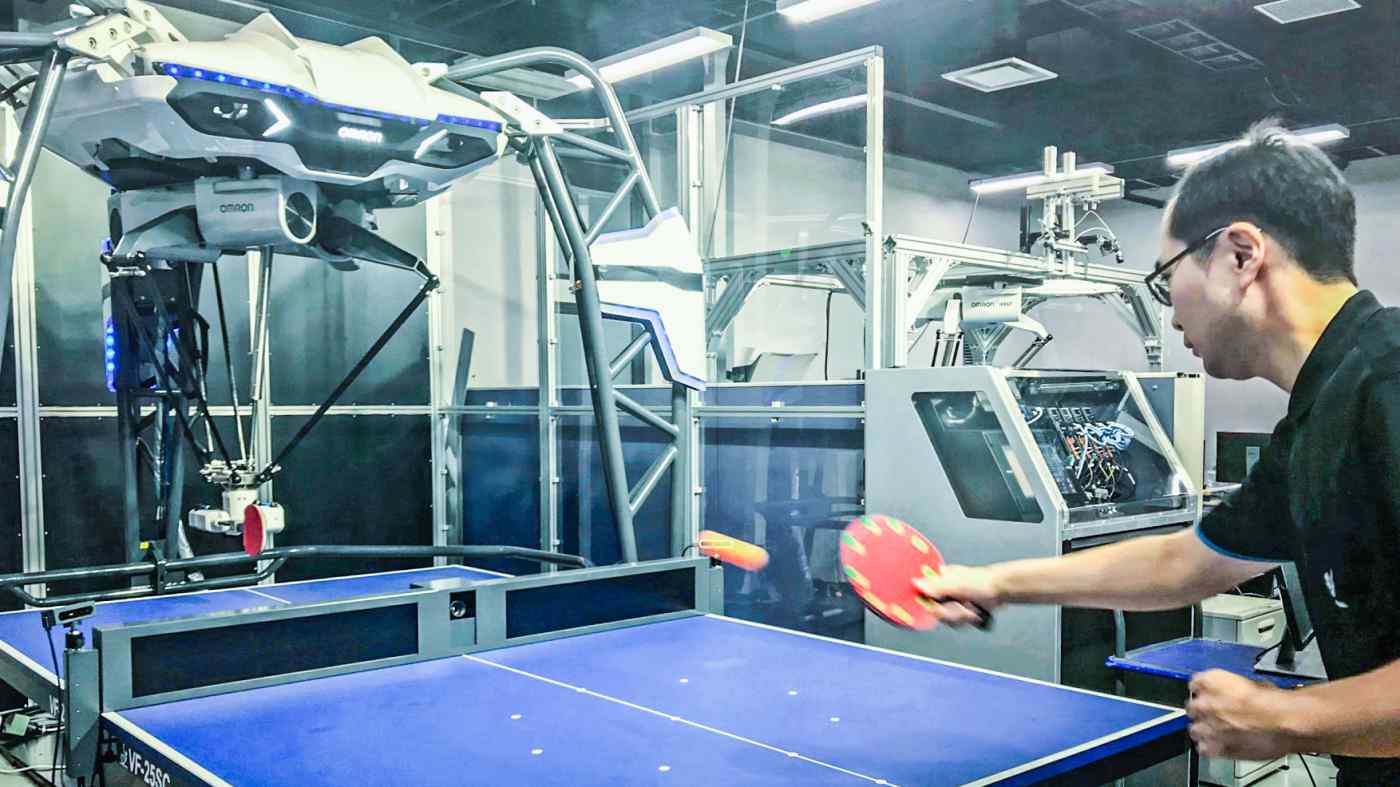 TOKYO -- Omron is developing an AI-driven table tennis robot that can smash the ball or send back a slow, arching forehand, according to the player's level.

The robot, named Forpheus, uses cameras, sensors and AI-analyzed data to detect player and ball movement then react accordingly. It can also adjust its game based on an evaluation of a player's level.

But table tennis is not the Japanese electronic parts maker's only game. Omron is using Forpheus to develop technologies that can be applied to machines designed to help people improve skills and techniques.

At Omron's Keihanna Technology Innovation Center in Kyoto Prefecture, a researcher was playing table tennis with Forpheus. The rally between man and machine went on endlessly in a rhythmic clack of the ball hitting table and racket.

Equipped with five cameras, the machine instantly detects movement of the player's paddle as well as ball speed and rotation. It then predicts the trajectory of the ball using image processing technology, swinging the paddle-equipped robot with its six-axis motor system. Arm movement is achieved in less than 1,000th of a second to return various shots, like chops and drives.

Forpheus was first introduced in 2014 at the Ceatec consumer electronics trade show. Now in its fifth generation, Forpheus has made great strides since version one, which was derided within the company as a "dislocation robot" because the arm holding the paddle kept coming off.

Now Forpheus is a formidable opponent that can beat most amateurs. The company claims it even holds its own against a former member of a school table tennis club.

The robot detects the skills and tactics of humans and adjust its performance accordingly, says Satoshi Yase, a lead developer of the project. It does this by measuring bone structure and body movements then compares the data against that of highly skilled players. Based on the evaluation, Forpheus adjusts its performance to that of its opponent.

For example, a beginner played with the accommodating Forpheus and had his weak strokes returned with equally soft shots and arching trajectories. The low level of play saw the rally go on for more 30 seconds, leaving the beginner feeling a bit more satisfied than if playing against a competitive human.

But the robot plays tougher against skilled opponents, like the aforementioned researcher, who upped his game by training with Forpheus.

Forpheus can also coach humans by offering suggestions based on comparisons against more skilled players. This is the main objective of the project, according to Yase: a robot aimed at "helping people grow."

In December, Omron launched a joint AI research project with Square Enix, a Japanese video game developer best known for its "Final Fantasy" role playing video games. The project is designed to apply Square Enix's Meta AI technology to Forpheus, allowing the robot to refine its ability to adjust play to the level of its human opponent. This is the same technology used for the "Final Fantasy" series, which dynamically modifies its progress, situations and drama.

Omron envisions transferring technologies developed for Forpheus to its manufacturing operations. It may create, for example, a robot to train rookie assembly workers on complicated tasks that cannot be performed by machines.