With 16 million children stuck at home, classrooms are scrambling to digitize 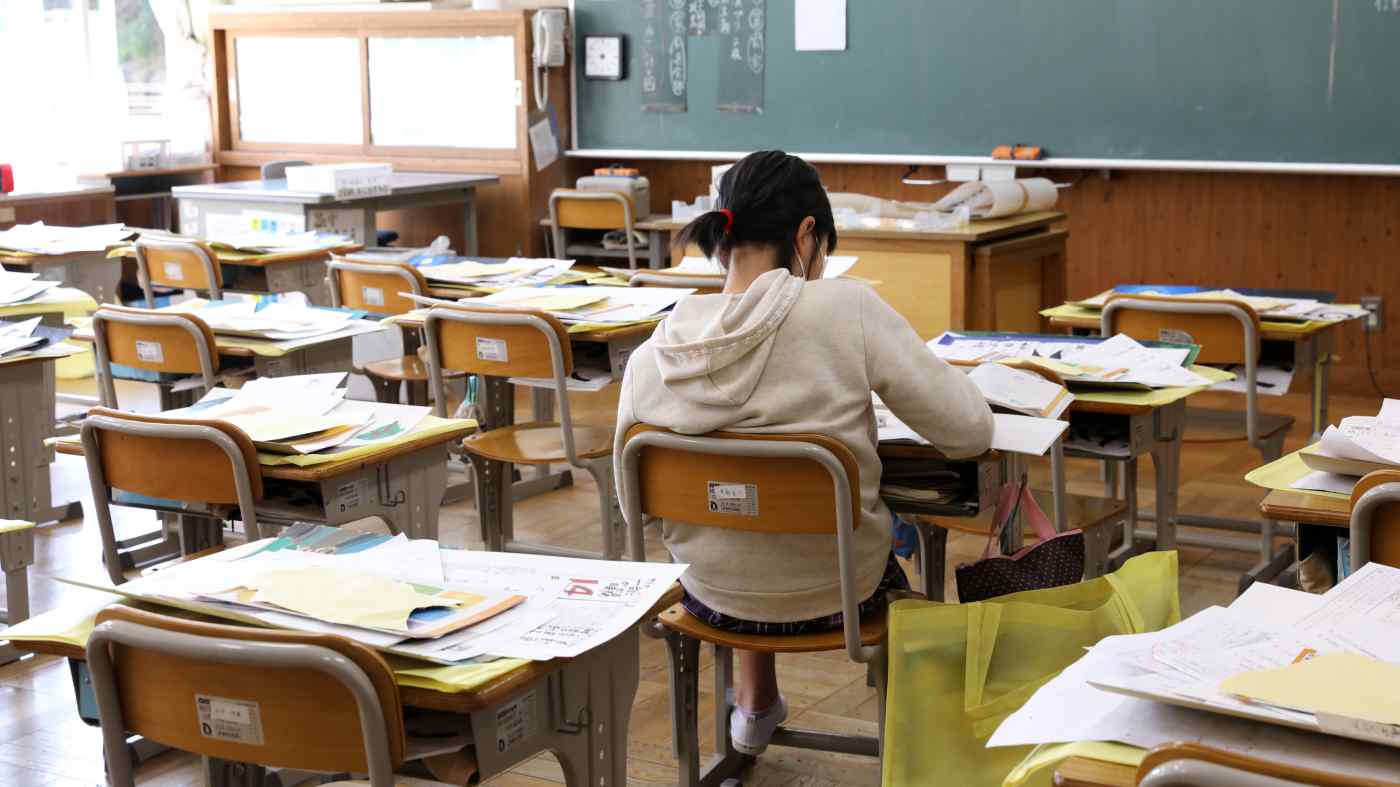 A girl studies at an elementary school in Aichi Prefecture on March 2 as schools in Japan close down due to the coronavirus outbreak. (Photo by Koji Uema)
MITSURU OBE and AKANE OKUTSU, Nikkei staff writersMarch 9, 2020 17:42 JST | Japan
CopyCopied

TOKYO -- School is out for more than 16 million children in Japan this month. And while the youngsters may be celebrating, the unscheduled closure of primary and secondary schools across the country due to the new coronavirus outbreak is a headache for parents and educators alike.

The unprecedented disruption has set off a move toward online teaching that may accelerate a shift away from the traditional textbook-based classroom that has been the hallmark of Japanese education since at least the 19th century.

Since the announcement by Prime Minister Shinzo Abe on Feb. 27 of the nationwide school closures, offers of free online education materials have poured in. They include online courses in traditional school subjects, as well as more tech-focused areas like programming and web design. The materials are usually offered to schools so that teachers can sign up on their students' behalf.

Even before the coronavirus epidemic, Japan's online education market was expected to grow by 50% to 310 billion yen ($3 billion) between fiscal 2019 and fiscal 2023, according to Nomura Research Institute, in part as a result of a campaign by the Abe government to make tablet computers available to all students by 2023. The spread of the virus and the extended school closures are likely to accelerate that growth.

SuRaLa Net, a cloud-based education startup, is one of the companies looking forward to a surge in demand. The Tokyo-based company is offering online learning courses free of charge to up to 50 schools in March. "It is an opportunity of sorts, as people are now interested in ways to learn from home," said a representative. "It is good that functions that were not previously used are now being noticed." High demand led SuRaLa to offer free access to another 50 schools recently.

Despite its reputation as a tech powerhouse, Japan has been slow to take up digital technology. Whereas Chinese are embracing mobile payments with gusto, for example, Japanese still prefer cash. Legacy systems, such as extensive networks of retail banks and ATMs, have slowed the development of new technology.

The same is true of Japan's education system, experts say. Textbooks and assignments are mostly in paper form, as is correspondence between teacher and student. Students bring home reams of handouts every day, which parents must review and sign. Reasons for the reluctance to go digital include concerns about equality -- not all children have access to digital technology at home -- as well as concerns that children may see inappropriate content if they have access to a computer.

Up to now, impetus for change has been limited because schools continue to do a decent job with analog technology, according to Hitoshi Nakagawa, a professor of education at the Open University of Japan, a distance-learning institution.

The shock of the coronavirus, however, may finally spur faster digital action.

"Japan as a whole has been slow to embrace digital technology. The issue is not limited to schools," said Jun Takahashi, an associate professor of education at Tokyo Gakugei University. "The school closure is forcing schools to rethink how they go about their business."

When NTT Communications, a telecom carrier, offered to make its online learning package available free of charge this month, it had few takers. The package includes online assignments, monitoring and feedback tools, and a function that lets students share their answers.

Japan has long been a laggard in classroom use of digital technology. According to the most recent PISA educational achievement tests published last December by the Organization for Economic Cooperation and Development, Japan was at the bottom of the league, with about 80% of students saying digital technology is not part of their classroom experience.

The business community has been calling for change, complaining that local authorities, who are primarily responsible for education, have placed more emphasis on social welfare than education.

An annual survey published in August by the education ministry shows an average of one computer for every 5.4 students in Japanese schools. The shortage is especially acute in big cities, where children are most numerous and the cost of equipping classrooms is highest for local authorities.

Tokyo-based Recruit Marketing Partners, a subsidiary of job placement service Recruit, on March 3 began registering subscribers for its free video lecture service, Study Sapuri. The service offers unlimited access to around 40,000 lectures in five key school subjects. The company will make the lectures available for free to around 100 elementary, middle and high schools in some 20 municipalities. By selecting lectures and giving tests, teachers can see how their students are progressing in real time. Teachers and students can also exchange messages online.

Until now, the service has mainly been used in rural areas, where students often lack access to after-hours "cram schools," or as a supplement to students' regular coursework. In 2018, the service was in use at 2,575 high schools in Japan.

A Recruit Holdings spokeswoman said she hopes that the current situation "will turn out to be a positive step for online learning," as various services are put into use.

The city of Izumi-Otsu, in Osaka Prefecture, recently began using Study Sapuri. The city's director of educational guidance, Osamu Nishimura, said that each school will see how many students lack the necessary equipment and Wi-Fi to use online learning. The city is considering lending tablets to those students.

By this week, students from fourth to eighth grade will be using Study Sapuri to learn from home. Teachers will monitor the students' progress, lending support and instruction when students come to school once or twice a week. The city had already planned to introduce online learning to seventh graders starting in July, handing out tablets to about 600 students.

Even in central Tokyo, there are significant disparities in classroom IT use. Shibuya Ward, in the city's southwest, has been actively introducing digital technology. Shibuya is home to many IT companies and the ward was already moving ahead with a tablets-for-all students initiative, issuing tablets with 4G broadband well before the Abe government launched its own tablet drive.

The children use the tablets both in the classroom and at home. Windows software is used to manage parental controls on the gadgets. The controls are relaxed during school hours so students can search the internet more freely for school projects. After school and during holidays, the controls are stricter.

"The tablets have proved an extremely effective tool to deal with the sudden school closure," said Hideaki Teshirogi, principal at Nishihara Elementary School in Shibuya. The day before the closure began, Teshirogi proclaimed in the school newsletter: "The school will close, but the online Smart School is about to start."

At 9 a.m., the school uploads student assignments, as well as a video pep talk from Teshirogi. The students download the coursework and can ask questions online. When they finish, they upload their assignments, which the teacher checks, either at school or at home.

The ward introduced the tablets to schools in 2017 as part of an initiative by Mayor Ken Hasebe to help students pursue opportunities worldwide. "Digital technology has made teaching much more efficient," Teshirogi said. It has not only made school paperless, but has also allowed teachers to share material from the internet with students instantly.

The initiative is expensive, Teshirogi acknowledges. Shibuya, which enjoys fat tax revenues from well-heeled companies, can afford it, where others would struggle. But he believes Japanese schools must press ahead with digitization, "otherwise, Japan will lose to China."