Curry with a gin and tonic? AI gourmand declares it a match

TOKYO -- In a novel twist on marketing research, a number of Japanese beverage companies are experimenting with neural network and other advanced technologies to discover what foods pair best with their libations.

A form of artificial intelligence, neural network technology attempts to replicate brain processes. Some companies want to put this and other AI-related tech to work studying the sources and mechanisms of pleasurable sensations, then apply the findings to product development.

Barcadi Japan is one that has signed on with AI gastronomy. The Japanese unit of spirits giant Bacardi has tapped Tokyo-based startup Aissy to find the best match for the iconic gin and tonic made with its premium Bombay Sapphire gin.

Aissy first runs food or drink through its taste analyzer, nicknamed Leo. Sensors in the device detect chemical substances that trigger taste sensations. After determining the types and quantities of these substances, Leo uses neural network technology to quantify tastes according to the five basic sensations: sweetness, saltiness, sourness, bitterness and umami.

The device can also check compatibility between foods and drinks, which presents new opportunities for marketing and advertising. "People find pairings pleasing when there is a good balance between the different tastes," said Ryuichi Suzuki, CEO of the startup.

Suzuki's claim has not been scientifically proven but seems to be backed by plenty of anecdotal evidence.

For example, Japanese generally consider rice and green tea products a good match. Leo confirms this, giving the pair a score of 97 out of 100. Conversely, a rice-milk pairing -- definitely not a Japanese favorite -- notches only 73.

According to Aissy, ratings of 90 or higher represent a great match, while scores under 80 are so-so at best.

Enter the gin and tonic. Azusa Kern, an assistant brand manager at Bacardi Japan, "wanted to change the image of the cocktail, from something people drink at a bar to one accompanying daily meals." So she asked Aissy to find the cocktail's best mate from dishes popular with Japanese. 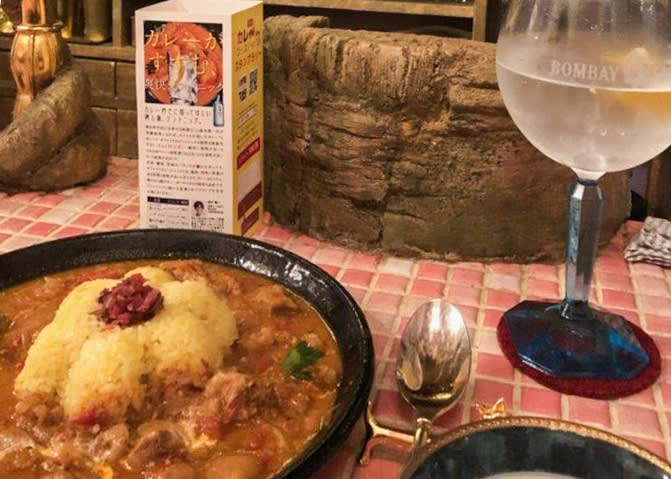 Curry served with gin and tonic at a Tokyo curry festival in October 2019. (Photo courtesy of Bacardi Japan)

Surprisingly, one of the best turned out to be curry. Gin and tonic, which Leo characterized as a melding of sweet, sour and bitter, went well with the saltiness and umami of curry, hitting 94.8 -- higher than beer with edamame at 92.8, and red wine with red meat at 94.0.

Encouraged by the results, Bacardi Japan took part in a Tokyo curry festival last October, giving each participating restaurant two bottles of Bombay Sapphire gin and asking them to put gin and tonics on the menu. "Twenty shops took us up on the offer, and now quite a few are interested in serving our gin," said Kern.

In its quest to find more pairings with ordinary fare, Bacardi Japan released in November data showing how well the cocktail paired with cheap convenience-store food, such as steamed meat buns and oden, a stew consisting of boiled egg, daikon and other ingredients. Both scored high, with the buns edging out oden 97.2 to 95.7.

While the process of quantifying taste is still in its infancy, Aissy wants to take it a step further by analyzing actual biological reactions to foods and beverages.

"After we collect a large amount of data, it will become clearer which tastes evoke favorable reactions and which do not," said Suzuki. "If we can develop an AI program based on the data, we might be able to create a benchmark, something like a "delicious index."

Aissy will team up with Keio University this year to try and establish a more definitive link between taste and the how people define deliciousness.

"What people find delicious changes with times," said Suzuki. "If we accumulate enough chronological data, we might be able to forecast future culinary trends."