TOKYO -- Lower back pain is something caregivers, farmers and factory workers know all too well. But engineers in Japan are developing wearable mechanisms that help with heavy lifting, whether it be crates or bedridden patients. 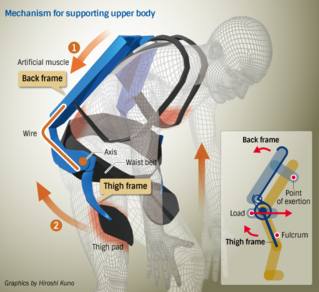 The emergence of robotic assistance suits comes not a moment too soon. Aging societies like Japan's face a growing need for nursing care workers and a worsening shortage of labor in sectors such as construction and agriculture. Widespread adoption of wearable robots in Japan could help to solve those problems -- and provide a template for other graying nations.

A number of wearable support systems are hitting the market. One is the Muscle Suit. Developed by Hiroshi Kobayashi, a professor at the Tokyo University of Science, the contraption fits over the shoulders like a backpack, with one frame component that rests on the back and a second that extends from the waist to rest on the front of each thigh. Inhaling through a mouthpiece activates an air cylinder attached to the frame, inflating two or four rubber tubes that work like muscles. When these artificial muscles contract, they pull on wires connected to the thigh frames; this causes the back frame to move in a way that raises the upper torso.

The standard Muscle Suit, with a set of four artificial muscles, can lessen the load on the back by as much as 30kg. The device itself, including the air cylinder, weighs around 7kg.

Every one of the company's 500 vehicles is now equipped with a Muscle Suit. "It takes the load off my back and I feel far less tired the next day," said Norikatsu Kimura, an area manager in Yokohama.

The venture from the University of Tsukuba, near Tokyo, now offers a light and compact version designed to reduce lumbar stress for laborers. 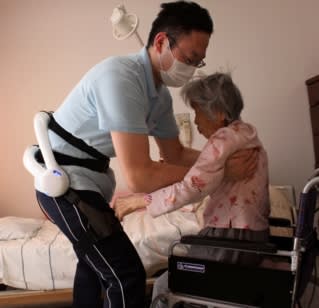 A caregiver wears a HAL for Care Support device at a nursing home.

The 2.9kg device fits on the lower back, with belts around the waist and each thigh. Instead of compressed air, the mechanism is driven by a motor. This motor switches on when sensors detect the faint bioelectric signals that are generated when the brain commands muscles to lift something.

This way, movement is coordinated; the belts lift the torso and the machine bears 25% to 40% of the load.

Last November, general contractor Obayashi introduced these HAL devices at a construction site in Tokyo. That triggered a succession of orders for use at factories and distribution centers. 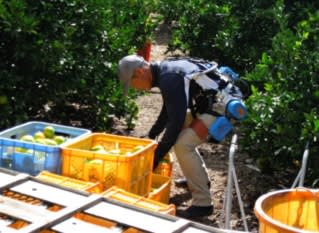 Yagi's LiBERo is designed to help lift, say, crates of oranges or bags of rice and walk with them. It also assists with backbreaking chores like harvesting daikon radishes.

The struggles of Japanese farmers inspired Yagi to create the LiBERo. In 2011, more than 60% of the nation's 2.6 million agricultural workers were over the age of 65. In Wakayama Prefecture, which is famous for mikan oranges, farms are being abandoned because of the aging population. Yagi wanted to improve productivity and enable older farmers to deal with heavy loads.

While the HAL machines respond to bioelectric signals, the LiBERo uses sensors built into gloves to detect when a container is being lifted. A computer, installed in the part that fits to the back, analyzes the wearer's movements and controls an electric motor that raises the torso. Other sensors attached to the shoes detect when a few steps have been taken, triggering extra assistance for walking with a load, even on an incline.

The LiBERo handles around 10kg of the weight of a 20kg to 30kg object. "We limited it to 10kg so the wearer could stop under their own power, even when they take false steps," Yagi explained.

The LiBERo is currently undergoing tests. Rentals are scheduled to begin in fiscal 2016, using machines that cost close to 1 million yen ($8,280) apiece.

Wakayama University estimates that in Japan alone, there is room to sell 11.4 million robotic assistance suits designed to prevent back pain. Assuming that the prices of such machines ultimately drop to around 200,000 yen, that would translate into a market worth 2.3 trillion yen.