If redundant stabilization systems don't grab you maybe parachutes will TOKYO -- Drones are adopting redundant stabilization systems so they can continue on their missions even if some parts fail.

One piece of new technology allows drones to keep flying safely even when sensors -- themselves meant to monitor if a propeller (or propellers) fails -- malfunction.

As flying objects always have the possibility of falling, drone makers are lying if they market their products as fall-proof, according to Tomoko Kakino, associate director at the Japanese unit of China's DJI, the world's largest drone maker.

DJI and other makers are adopting multiple sensors that do the same job and a system to prevent drones from immediately falling when a motor fails to rotate a propeller.

While drones need to be light, redundant stabilization systems improve drone performance and can boost sensor accuracy, according to DJI.

The flight controlling device of a drone receives signals from the operator, who (or which) uses GPS information to control the machine's flight path. Drones also have inertia measurement units, or IMUs, that aid in judging their posture. The Phantom 4, made by DJI, uses multiple sensors and inertia measurement units.

But the controller needs to know more than a drone's location and altitude to get it to its destination or to complete its mission. Information about the surrounding environment and anything else in the air also needs to be provided.

To this end, the accuracy of the sensor, GPS unit and IMU is indispensable.

DJI is promoting redundancy in its products. The mainline Phantom 4, released last March, has a double compass system that detects information from IMUs and the vehicle's direction. The Phantom 4 is also equipped with a system to receive information from a total of 24 satellites aligned with either GPS or Russia's Global Navigation Satellite System.

In addition, the Phantom 4 and Mavic Pro, a more portable drone that DJI released in September, are equipped with two camera sensors to detect conditions on the ground and two ultrasonic height-measuring sensors.

The large industrial-use Matrice 600 rotates itself to avoid falling even if three of its six propellers drop off. It can also mount up to six batteries. 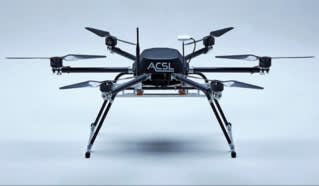 The ACSL-PF1 from the Autonomous Control Systems Laboratory

Next month, the Autonomous Control Systems Laboratory, a drone venture in the Japanese city of Chiba, will release a product designed to keep operating even if one of its six propellers fails. Its safety system involves a flight controller that recognizes when a propeller has stopped working and immediately adjusts the remaining five. The controller can also detect signs when a part is about to malfunction and make adjustments before anything stops working.

The Chiba lab has also developed a product with a parachute. A sensor recognizes the drone's tilt and falling speed and can automatically open the parachute in a 10th of a second. Think of the parachute as an airbag for drones. The parachute also opens when the drone's battery malfunctions.

When the parachute opens, the drone falls at a rate of around 5 meters per second, lessening damage upon impact.

Still, said Kenzo Nonami, a professor at Chiba University and CEO of ACSL, "a system is needed that can detect signs of trouble while a drone is flying, find a safe place nearby and move it there."