Facebook touts itself as American champ against China in hearings 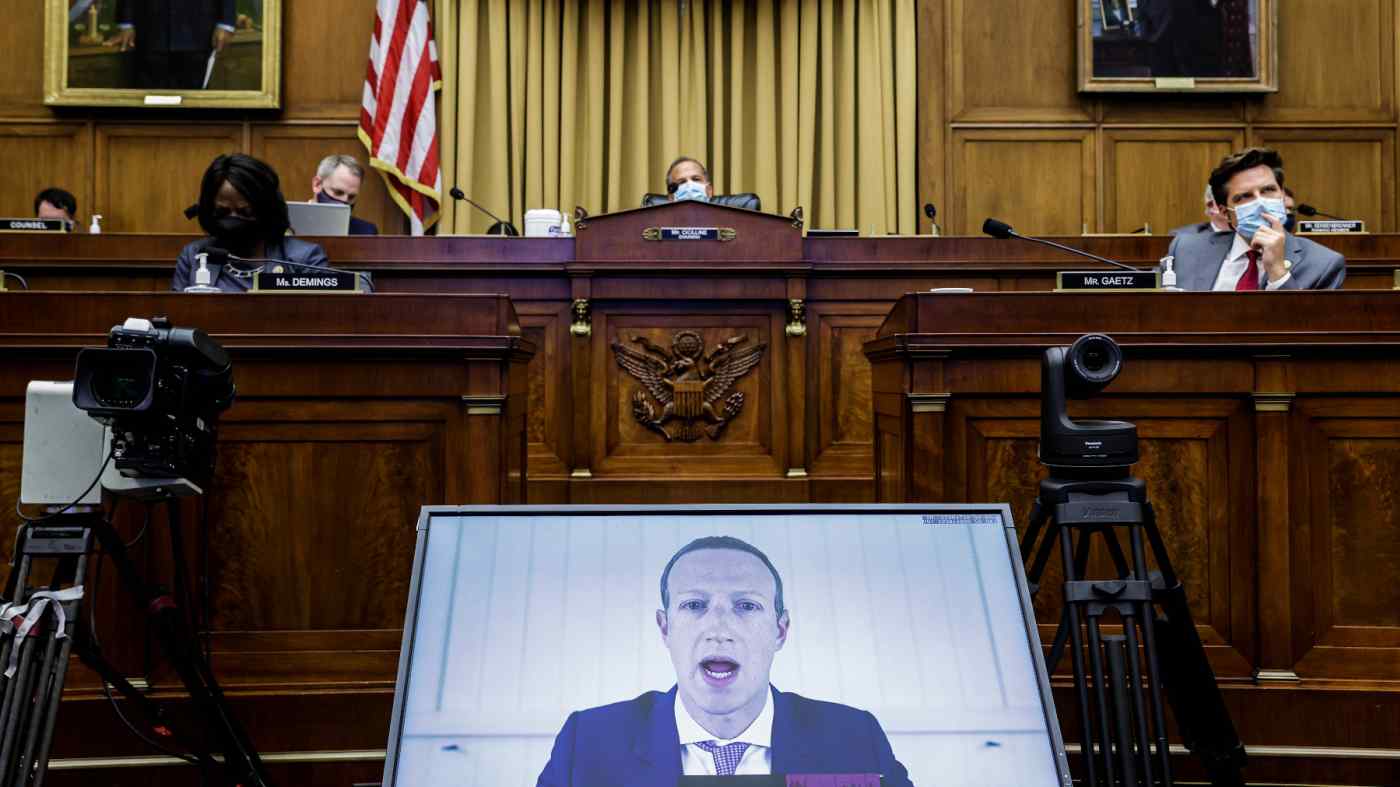 NEW YORK/PALO ALTO U.S. -- Just five years ago, Facebook CEO Mark Zuckerberg made a 20-minute speech in Mandarin at the prestigious Tsinghua University in Beijing, in which he praised "great Chinese companies" such as Alibaba Group Holding and Xiaomi, as well as China's history as "a story of innovation."

But on Wednesday in testimony before a House Judiciary subcommittee hearing into companies dubbed Big Tech, his tone was different, adjusted for a world that had completely changed.

"Facebook stands for a set of basic principles" including "keeping people safe, upholding democratic traditions like freedom of expression," he said. Zuckerberg added that these "are fundamental values for most of us, but not for everyone in the world, not for every company we compete with or the countries they represent."

"If you look at where the top technology came from a decade ago, the vast majority were American. Today, almost half are Chinese," Zuckerberg said.

The congressional hearing also included testimony from Amazon CEO Jeff Bezos, Apple chief Tim Cook and Google CEO Sundar Pichai. With the maiden presence of Bezos, this was the first joint appearance at Congress by the heads of the big four U.S. tech companies, at least virtually.

While all four warned that new regulations in the U.S. could result in allowing China to dominate in innovation, Zuckerberg went further, condemning intellectual property theft by China.

"I think it's well documented that the Chinese government steals technology from American companies," he said when asked about the practice.

In contrast, Cook and Bezos said they knew of reporting of intellectual property theft, but they had never witnessed it at their companies. Pichai initially said he was not aware of it ever happening at Google, but added later that the company experienced a cyberattack in 2009 that appeared to have originated from China.

Zuckerberg's testimony deviated slightly from his prepared statement, which had taken on a more assertive tone and warned that "China is building its own version of the internet focused on very different ideas, and they are exporting their vision to other countries."

Hours before the American executive presented his adjusted testimony, new TikTok CEO Kevin Mayer made a public attack against Facebook.

The spat comes amid heightened competition between Facebook and the social media latecomer, and against a larger backdrop of U.S.-China tensions. TikTok is owned by Chinese company ByteDance.

"At TikTok we welcome competition," Mayer said in a statement released Wednesday morning, protesting Facebook's "maligning attacks ... disguised as patriotism and designed to put an end to our very presence in the U.S."

In his first public remarks since joining the company from Disney, Mayer also accused Facebook of launching "copycat products" -- first Lasso and now Reels via Instagram -- modeled after TikTok.

Zuckerberg's testimony Wednesday was not the first time he used China to appeal to Capitol Hill. Back in October, he directly named TikTok while presenting similar points in a perceived defense against criticisms of how Facebook deals with misinformation on its platform, including in political ads appearing on the site

"While our services, like WhatsApp, are used by protesters and activists everywhere due to strong encryption and privacy protections, on TikTok, the Chinese app growing quickly around the world, mentions of these protests are censored, even in the U.S.," he said at Georgetown University in a speech centered on freedom of expression.

But Zuckerberg's line of defense Wednesday is complicated by grievances from President Donald Trump's administration and the Republican Party regarding content moderation rules for Facebook and similar companies. Then-Disney executive Kevin Mayer on the floor of the New York Stock Exchange in October 2019.    © Reuters

These rules have resulted in the removal of posts from right-wing publishers, as well as this week's brief suspension of the Twitter account of Donald Trump Jr., the president's son, on grounds of providing misinformation about the coronavirus.

"If Congress doesn't bring fairness to Big Tech, which they should have done years ago, I will do it myself with Executive Orders," the U.S. president tweeted Wednesday. "In Washington, it has been ALL TALK and NO ACTION for years, and the people of our Country are sick and tired of it!"

Zuckerberg's attacks against China and its tech companies also mark a U-turn from several years ago, when Facebook was thought to still harbor hopes of entering the Chinese market.

As relations between Beijing and Washington have worsened over the years, amity toward China in Silicon Valley has come to be seen as an untenable position.

TikTok has faced heavy scrutiny from Washington, including the Committee on Foreign Investment in the United States, which has the power to ask ByteDance to divest the U.S. operations of TikTok if it determines the app's presence in the country poses a national security risk.

In a press briefing at the White House with President Donald Trump on Wednesday, U.S. Treasury Secretary Steve Mnuchin confirmed that TikTok was under review by the committee. "We'll be making a recommendation to the president on it this week... We have a lots of alternatives" Mnuchin said.

TikTok's Chinese owner ByteDance acquired Musical.ly in 2017 which later became part of TikTok, and CFIUS has been reportedly looking into the deal to see if it poses national security risks.

Last year, TikTok came under fire for deleting content related to Beijing's treatment of Uighurs, which it later said was done by accident. In response to mounting pressure, the company is launching a Transparency and Accountability Center for moderation and data practices.

TikTok also has added public policy personnel in the U.S. and hired outside lobbyists to cope with increasing pressure from Washington.