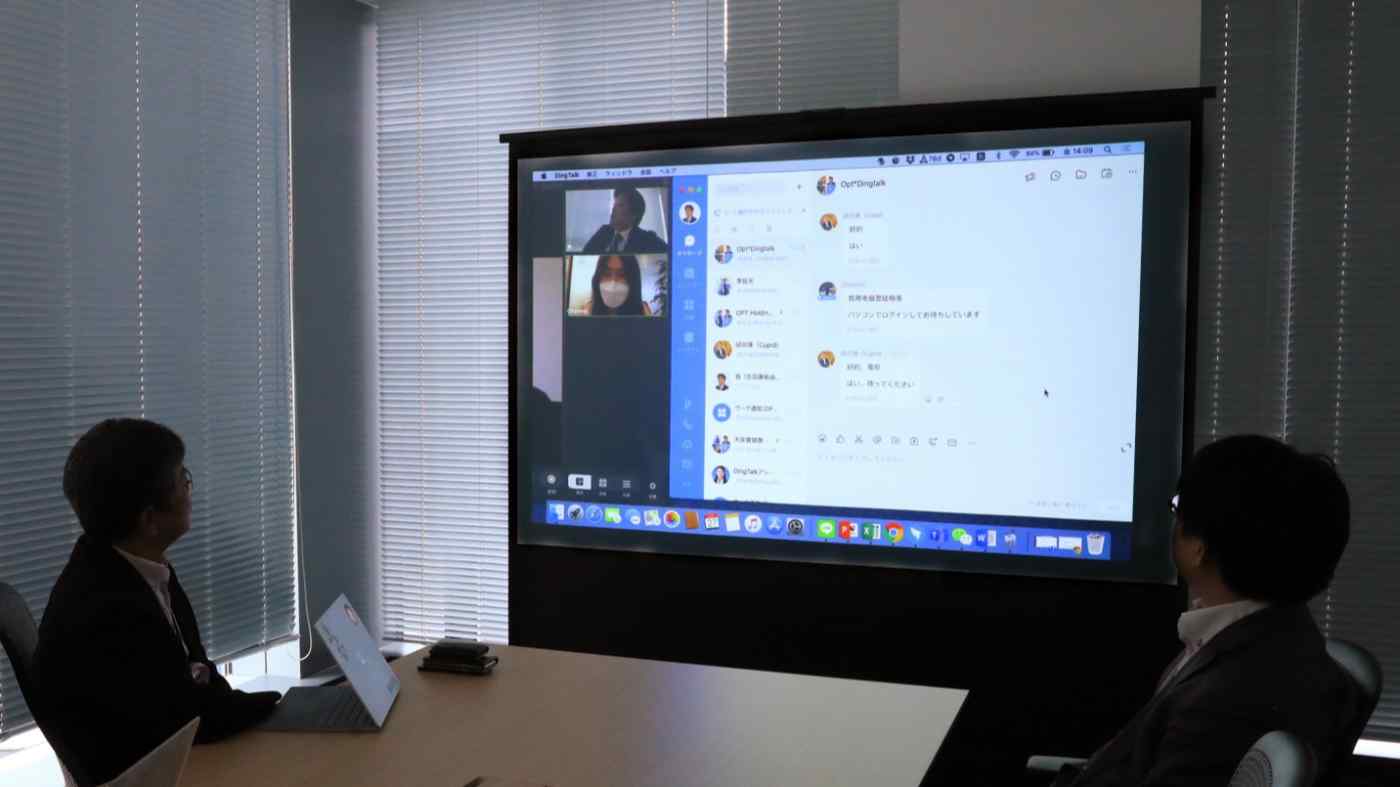 TOKYO -- With more people around the world working and socializing from home due to the coronavirus pandemic, the rivalry between Chinese and U.S. technology companies has expanded into the area of teleconferencing.

In late March, Japanese internet ad agency Opt Holding was meeting with clients remotely instead of in person as a precaution against the virus. Its app of choice was Alibaba Group Holding's DingTalk which the company also uses to keep track of worker attendance and marketing efforts, and to promote communication with its team in China..

Roughly 200 million users across over 10 million companies use DingTalk in China. With more people working from home amid the outbreak, the platform in March tripled the number of people that could attend the same meeting to 302.

Alibaba has now turned its sights overseas. Its strategy in Japan is to target companies that do business in China, offering automatic translations of 14 languages on DingTalk's chat function. This allows a Japanese businessperson to translate a message from a Chinese client with the click of a button.

DingTalk was among the top 10 most downloaded business apps in the January-March quarter, according to data analytics company App Annie. Tencent Holdings' app was popular as well, particularly in its home market of China.

But the most downloaded business app was Zoom from U.S.-based Zoom Video Communications, founded in 2011. Zoom's daily meeting participants jumped 30-fold between December and April to 300 million, as it gained fans not just for business meetings but also for personal use.

Still, the app's quick growth has also triggered concerns over its security, especially after several meetings on the platform were hacked. The company has brought in Facebook's former security chief to address the issue. It also acquired Keybase, a startup with encryption expertise, in May.

Big tech is also accelerating its push into teleconferencing. Facebook launched Messenger Rooms worldwide on Thursday, allowing up to 50 people to meet virtually for as long as they need for free. Google has made Google Meet available for free.

Microsoft Teams, which lets users easily edit word documents and spreadsheets while teleconferencing, reached 75 million daily users worldwide in late April -- about four times as many as five months earlier. These companies see video calls as a way to keep users on their platforms for longer and strengthen existing operations.

The global market for teleconferencing apps is expected to reach $16 billion in 2030 from $6 billion in 2019, according to Transparency Market Research. The battle for the space is only expected to heat up as more companies consider allowing employees to work from home even after the coronavirus outbreak subsides.