From Chromebooks to cameras, ed-tech hardware surges on pandemic TAIPEI -- Royce Hong never imagined that his 13-year old company, IPEVO, would see sales jump more than tenfold within a year. But demand for his previously niche product -- streamlined document cameras used in schools -- has exploded since the coronavirus pandemic spurred a global boom in remote learning and teleworking.

IPEVO's camera, which looks something like a folding desk lamp, connects directly to electronic devices like smartphones and laptops to easily share images of physical objects or documents during video calls.

"Previously our document camera was intended to address a niche market, such as K-12 schools, and was a 'very nice to have' for school teachers. But now it's gradually turning into a 'must-have' device for many people who have to do presentations very often," Hong told Nikkei Asia in a recent interview. "We really didn't think it would become so popular, and even push us to roll out more accessories to address this growing online visual communication needs. Orders far exceeded the forecast that we gave to our manufacturing partners this year."

In the decade that followed, IPEVO gradually built up a roughly 50% share of the document camera market in American public schools. The coronavirus outbreak, however, has expanded the company's reach to more commercial uses across a wide range of industries, pushing orders from some 20,000-30,000 units annually to several hundreds of thousands so far this year, according to the company. 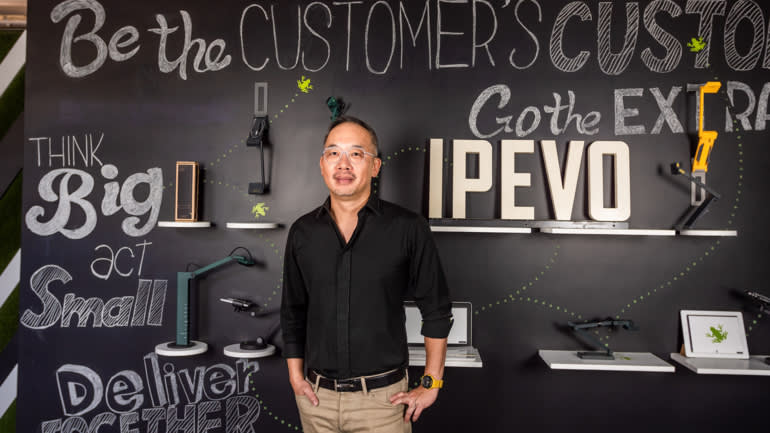 Royce Hong, who founded IPEVO in 2007, said he never imagined his company's sales would surge in sales tenfold within a year. (Photo courtesy of IPEVO)

IPEVO's success is just one example of how the global pandemic has fundamentally changed people's working and learning styles -- and driven demand for what was once niche hardware.

Tech giants like Google, Microsoft and Alibaba Group Holding, as well as PC makers like Acer and chipmakers such as MediaTek, are also looking to capitalize on the booming demand.

Google has been one of the biggest beneficiaries of this trend. The U.S. internet search giant began licensing its Chromebook -- an educational purpose notebook that requires less computing capability and built-in storage than most other laptops -- to PC makers like Acer and Asustek Computer in 2011. Unlike traditional PCs that rely on Intel or AMD's central process units to handle complicated computing tasks, the Chromebook runs on Google's ChromeOS, which relies on the cloud to handle most storage and computing processes. This allows Chromebooks to run on the same power-efficient mobile processors that smartphones use -- and has created new opportunities for mobile chip makers such as MediaTek and Qualcomm

The shipment of notebooks running on ChromeOS grew more than 24% in the first half of 2020 to some 10.3 million units, according to IDC data. Most industry executives expect the segment to continue to grow through next year. As recently as 2017, ChromeOS laptops accounted for just 7.7% of the overall notebook market, compared to more than 11% in the first six months of this year, IDC data showed. Global shipments for the overall PC industry increased just 1.2% to 125.5 million units during the period, according to IDC.

"During the pandemic, the overall laptop market saw growth, but within such a market, the cloud-based Chromebook recorded remarkable growth, which we expect to be around 50% increase year over year," Yu said. "That's something we never saw in the past." Sales of devices that aid teleworking and remote learning, like IPEVO's document camera, have boomed amid the coronavirus pandemic. (Photo courtesy of IPEVO)

Jason Chen, chairman and CEO of Acer, the world's No. 5 PC maker, also expects demand for educational-use Chromebooks to continue growing due to COVID-19, with 40% growth estimated for 2021.

The revenue of Acer's Chromebook business grew 94.4% on the year in the September quarter, according to the Taiwanese PC company. Acer is the largest Chromebook maker, accounting for more than 30% of the European market in the April-June quarter, with shipments growing as much as 47% on the year during the same period, according to IDC.

"At first, we thought the surging demand for Chromebook was only temporary, but now it looks like this strong need is going to last for a while," Chen said. "I personally even got an email from a European country's education ministry chief, urging us to ship more and faster as the schools are opening after summer."

"We could only ship one-third of the orders due to severe supply constraints," he added. "The demand for Chromebook seems to never be fulfilled."

Microsoft recently launched its Surface Laptop Go, a 10-inch notebook with a starting price of just $550, to share from Chromebook in the remote-working market. In September, Alibaba introduced its first cloud-based computer to expand the Chinese internet giant's presence in China as the pandemic drives people in sectors such as education and retail to embrace digital.

Zoom Video Communications, the popular software provider for video conference during COVOD-19, has also gotten into the hardware game. Earlier this summer Zoom extended its product line with Zoom for Home, a dedicated device for meeting marathoners, as the company expects remote working to remain the norm even in the post-pandemic era.

"We see the acceptance of remote working will be an irreversible trend ... and we want to introduce more tools to help people interact more naturally," Jeff Smith, head of Zoom Rooms at Zoom, told Nikkei Asia.

According to a survey conducted by research agency Gartner, 82% of 127 corporate leaders in the fields of human resources, legal and compliance, finance and real estate, intend to allow remote working at least some of the time going forward, while nearly half said they intend to permit employees to work remotely full time.

Joey Yen, an analyst with IDC, said the global pandemic and resulting surge in remote learning and working have boosted the use of a wide range of digital devices. "We see people are buying and upgrading their devices as they need to work or study remotely," Yen said. "We don't expect this trend to suddenly die down even if the coronavirus outbreak is fully contained, which is not likely to happen overnight. ... The transformation in classrooms and working spaces are here to stay."