TOKYO -- The dream of creating therapeutic compounds from genetically modified plants is becoming reality. There are several advantages to this method. It promises to make pharmaceutical production less expensive, and in the case of vaccines, easier to make quickly if there is the threat of a pandemic. One plant-made pharmaceutical is already for sale in Japan, though it is for dogs. Promising research to develop similar medicines for humans is well underway, however.

At a factory on the grounds of the National Institute of Advanced Industrial Science and Technology (AIST) Hokkaido in Sapporo, the agrochemical manufacturer Hokusan is growing genetically modified plants in a completely isolated environment.

Visitors have to put on clean-room suits to even look through the window at the vibrant green shoots growing at the facility. These are strawberry plants, which will ripen by summer. But these strawberries will not be for eating.

"They're full of interferons," said Noriko Tabayashi, a manager of the company's plant biotechnology center. Hokusan crushes and freeze-dries these strawberries in a separate room at the facility and then processes this into the finished interferon product.

The company began marketing the product this March as a drug to treat gingivitis in dogs. According to the company, it is the world's first pharmaceutical based on an ingredient made from a genetically modified plant.

In 2000, the United Nations adopted the Cartagena Protocol on Biosafety to the Convention on Biological Diversity by defining strict rules for the use of living modified organisms. In February of 2004, Japan enacted a law conforming to this protocol that defines two categories of use of living modified organisms. Type 1 use refers to unprotected, open-field use. Type 2 use refers to use in laboratories, factories and other settings where steps are taken to prevent the dispersal of such genes into the environment.

Any cultivation in Japan of genetically modified plants for industrial applications must be conducted inside a government-certified facility that complies with the Type 2-use protocol guidelines.

The government certified AIST Hokkaido's factory in 2007 as the first facility in Japan that complies with the Type 2 industrial-use protocol. To prevent accidental dispersal of modified genes, the air pressure inside the factory is lower than its surroundings, all exhaust gases are filtered and all wastewater is sterilized.

The use of recombinant technology is nothing new in the pharmaceutical industry. But most such recombinant drugs are currently made using genetically modified Escherichia coli or animal cells. There are well-established procedures for culturing massive numbers of bacteria or cells and then extracting and refining the therapeutically useful proteins. But the processes of cultivating cells and bacteria as well as extracting and refining effective compounds are complicated and expensive.

Edible plants offer a simpler route to the same destination, since the target proteins are obtainable by simply crushing the harvest. The factory may cost several million dollars to build, but the crops can be grown year-round regardless of the season.

"When what you are making are high value-added products like pharmaceuticals, it leads to a reduction in production costs," said Takeshi Matsumura, leader of the plant molecular technology research group of the AIST's Bioproduction Research Institute. 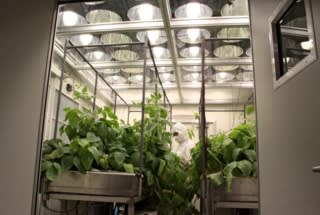 Hokko Chemical is growing soybeans that synthesize a vaccine compound for Alzheimer's disease.

Next to the AIST Hokkaido factory is another plant factory, named the Green Chemical Research Center, set up in 2012 by the Northern Advancement Center for Science & Technology. It hosts five tenant companies, including Idemitsu Kosan and Hokko Chemical Industry, that are all developing genetically modified plants.

The factory also has five cultivation rooms, including one with a lush patch of soybean plants. Maintained at about 23 C, the room yields three to four harvests a year.

"The soybeans contain a compound that appears to be effective against Alzheimer's disease," said Teruhiko Terakawa, general manager of the bioscience laboratory of Hokko Chemical.

Each gram of these soybeans contains 3mg of a compound that Hokko Chemical hopes can be developed into a preventative treatment against Alzheimer's. If things pan out, Hokko Chemical envisions a vaccine formulated as capsules of the powdered soybeans that is taken orally.

The optimism for such a breakthrough springs from work by a research team from Hirosaki University, which tested this potential vaccine component on mice engineered to develop Alzheimer's-like symptoms. They found that it worked to delay the onset of the disease and reduce levels of a protein called beta-amyloid in the brain, which is considered an agent responsible for the disease. That finding was reason to continue with animal testing aimed at advancing to human clinical trials after several years.

There is also a Canadian venture that became a subsidiary of Mitsubishi Tanabe Pharma in 2013. It aims to grow genetically modified tobacco plants within five years to synthesize a component for flu vaccines. Flu vaccines are now typically produced using chicken eggs in a process that takes six months. The company says such vaccines could be made in just one month with the tobacco plants.