Grab helped pioneer Malaysia's e-payments, but cashback rewards and other incentives by rivals have eroded the company's position. (Nikkei Montage/Souce photos by Reuters and Kentaro Iwamoto)

The transition to e-money received a major push from the Malaysian government last month, when it announced a budget giveaway of a one-off e-money credit of 30 Ringgit ($7.24) for every Malaysian aged 18-plus who earns up to $25,000 a year.

PwC Malaysia expects the e-wallet market will grow to a value of $20 billion by 2024 amid favorable industry growth dynamics and market potential, with retail, food & beverage, e-commerce and peer-to-peer transfers expected to remain the most popular types of transactions.

"E-wallet players are in a state where they are refining their offerings to establish a unique and differentiated value proposition that best meet the needs of the consumer," Yennie Tan, deals strategy leader at PwC Malaysia, told the Nikkei Asian Review.

According to the Central Bank of Malaysia, there are about 47 licensed e-money issuers in the country, compared with 28 players in 2017 and 40 in 2018, although only a handful of them are active, with the value of e-money transactions reached RM11billion ($1.3 billion) in 2018 from RM9.1billion in 2017.

The enterprises managed to steal a march on Grab's Grabpay, one of Malaysia's retail e-wallet pioneers, thanks in part to throwing in cashback rewards and establishing their presence in attractive merchants to entice locals, expatriates and tourists.

Touch 'n Go, a prepaid payment card introduced in 1997, has a clear advantage over the other players in the market due to its household name status. Majority-owned by Malaysia's second-largest lender, CIMB Group, Touch 'n Go embarked on a joint venture with Ant Financial Services in 2017 to establish TNG Digital, which uses an Alipay platform.

"The advantage of having Ant Financial on board is that it gives us leverage and understanding of the markets that they operate in," Ong told Nikkei Asian Review in an interview. "One day, my customers might be able to use their Ringgit-denominated TNG Digital app to pay a merchant who accepts Dana in Indonesia. It's possible because we use similar Alipay platforms."

TNG Digital's aspirations include enabling usage of its app at merchants who accept Alipay, Ong said.

TNG Digital currently has 5.2 million registered users, the vast majority of which signed up this year, and it logs almost a million transactions daily, according to Ong. He said: "At the end of last year we had about a million users, and we have grown tremendously this year to get to where we are today."

Boost, meanwhile, has attracted over 4.75 million subscribers to date, and has over 120,000 merchants on board. Axiata President and CEO Jamaludin Ibrahim said he envisions Boost becoming a full-fledged financial service provider as opposed to just another e-wallet. "We are aiming to move all the way to becoming a digital bank," he said.

Mitsui & Co acquired a strategic minority stake in Axiata Digital, home to Boost, last May. The digital subsidiary was then valued at $500 million.

Jamaludin said Boost is interested in securing a digital banking license from the Malaysian central bank, which is currently mulling the introduction of such licenses. He added that in Sri Lanka the entity gained a banking license after acquiring a small financial institution. 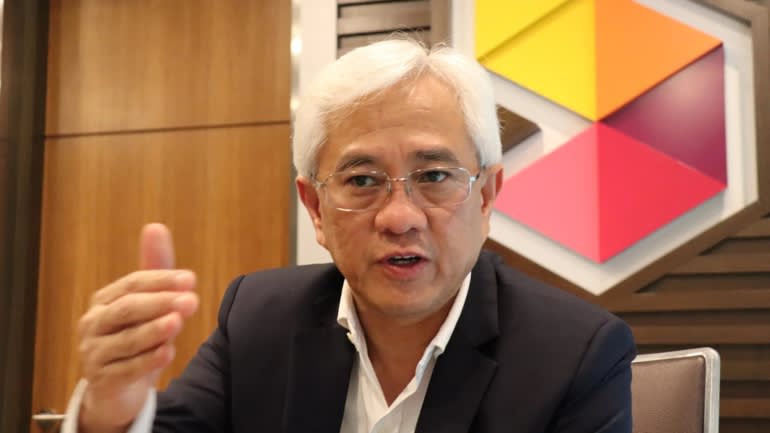 Axiata President and CEO Jamaludin Ibrahim has big plans in mind for Boost, aiming to develop it from an e-wallet app into a digital bank. (Photo by P Prem Kumar)

"Obviously we will need partners, like the banks themselves, to work with us because they have the balance sheet and the back-end engines including compliance, remittance and other things. But we have the front-end capability. So it is going to be a nice combination," he told NAR in an interview.

Jamaludin said Boost is open to joint-ventures or collaborations with any local banks to help its digital bank aspiration come to fruition. However, he ruled out any potential acquisition of banks as it would be too much of a "mouthful," both for Boost and Axiata.

The Axiata boss was also positive about the further monetization of Axiata Digital, and is seeking new investors with financial clout rather than technical expertise.

"We need more partners to fund our business," he said. "One of the problems in our digital business is that the kinds of investors who invest in Axiata do not value it as much as other types of investors with the mandate to invest in digital. It is a structural issue," he said.

Jamaludin said their e-wallet strategy is based on a principle of "five-micro," which comprises micro-payment, micro-remittance, micro-insurance, micro-lending and micro-savings.

The e-wallet has started dishing out micro-loans averaging $1,000-$1,200, which are able to be processed within minutes. "We have a nice sweet spot where we are in a much better position than the banks and insurance companies because we are in touch with customers every second," he said.

Boost does not want to take a higher risk on its balance sheet by offering bigger loans. The lending business launched in Malaysia last year, and its non-performing loans currently stand at zero, said Jamaludin.

The CEO added that having some 10 million subscribers of Axiata's Malaysian subsidiary, Celcom Axiata - one of the main telecoms providers in Malaysia - has enabled Boost to monitor analytics and enable effective credit scoring.

Boost is also engaged in micro-payments, micro-financing and micro-insurance, but efforts to move into micro-remittance and micro-savings have met with some regulation challenges, as licenses issued to e-money issuers bar micro-savings and are strict on cross-border remittances.