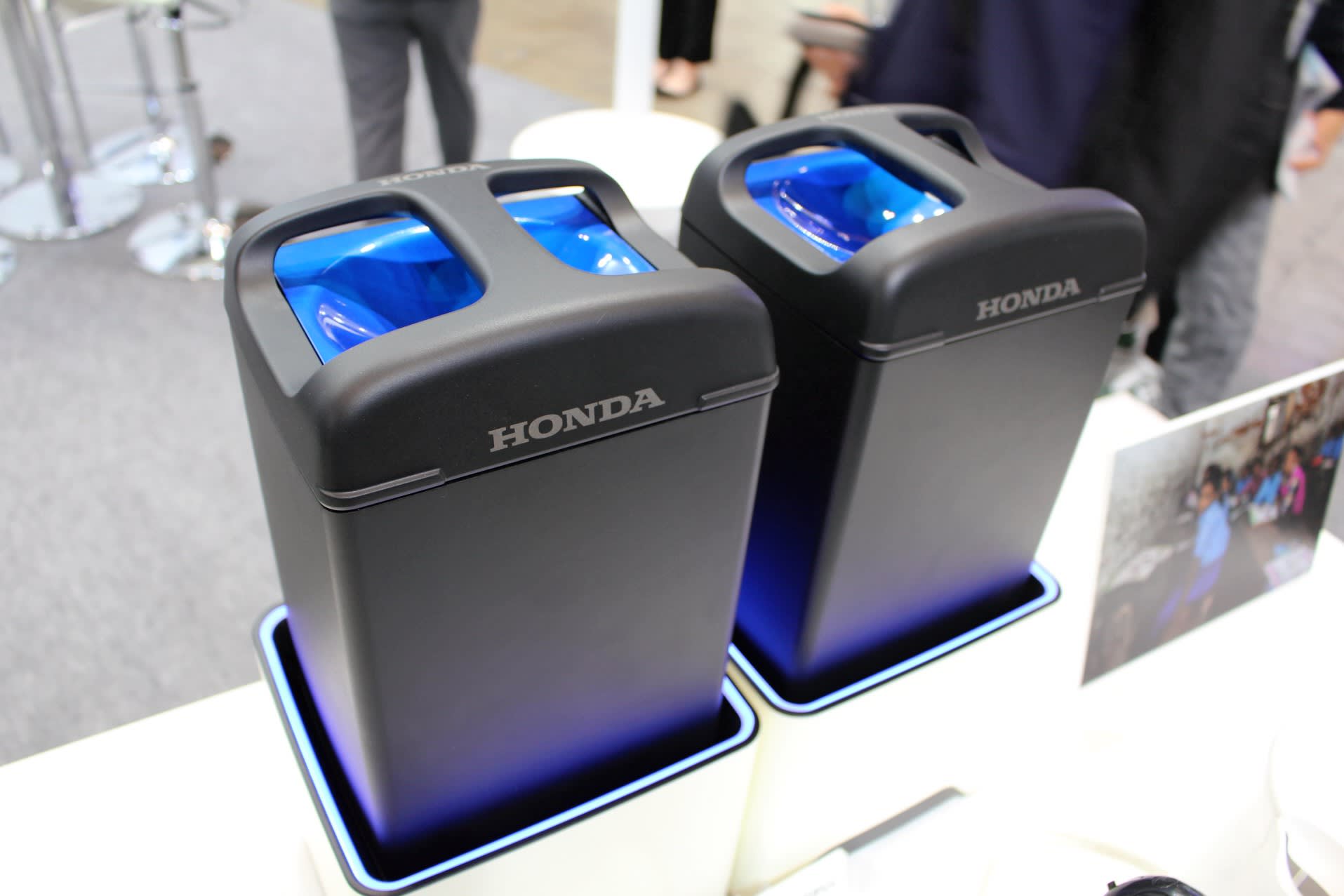 TOKYO -- Honda Motor made an appearance at this year's Ceatec international electronics and information technology expo in Japan, but instead of new car or motorcycle, it exhibited a lithium-ion battery and charging system. The idea behind the product is to offer not only vehicles, but energy that powers them as well.

The Japanese automaker has already begun testing the battery, which is intended for use in electric motorcycles and homes, in Southeast Asia.

Honda believes the global shift to electric vehicles will be much more extensive than a mere change in automobile powertrains.

Honda was the only Japanese automaker to take part in this year's Ceatec expo.

As the world's major automakers accelerate efforts to develop electric cars, there is no shortage of talk about such vehicles. But not a single automobile or motorcycle was on display at the expo.

Naohiro Maeda of Honda's Smart Community Planning Department said that Honda "wanted to present something, other than a car, that reflects [the automaker's] identity."

The main product at the Honda booth was the Honda Mobile Power Pack, a portable lithium-ion battery. The battery pack is colored black and accented with futuristic blue. It is about 30cm tall and 10cm wide and has output capacity of 1 kilowatt-hour. For convenience, the 10kg battery has a handle. The battery pack is used with this charging unit, the Honda Mobile Pack Exchanger, which both charges and exchanges depleted batteries for charged ones. (Photo by Keiichi Furukawa)

What Honda was promoting at the expo is a lifestyle based on power generated from renewable energy sources such as wind and solar. The portable battery is the core of this vision.

For example, people could use the battery to power their electric bikes or other vehicles during the day, then remove it from the vehicle at home later to power domestic appliances. Since the battery uses electricity from renewables, this mechanism would produce no carbon dioxide.

The battery pack is used with a special charging unit, the Honda Mobile Pack Exchanger. The user puts a discharged battery pack in the exchanger and presses the button to turn it around, and a fully charged pack appears. The system then recharges the old one.

Daijiro Takizawa, a researcher at Honda R&D, said the hope is to develop a charging unit that allows users to exchange an empty battery with a fully-charged one in less than 10 seconds, and to have such a unit all around town.

Honda began testing the battery in Indonesia and other Southeast Asian countries in July in partnership with Japan's New Energy and Industrial Technology Development Organization. The battery is being tested on electric bikes and for other purposes.

In the Philippines, Honda has teamed up with Japanese construction company Komaihaltec, which will build a wind power facility on the island of Romblon in central Indonesia. Power generated will be sent to Honda's power exchangers to charge batteries for use in electric vehicles and homes.

When electricity demand peaks on the island, the exchangers will send electricity to the power grid. The battery can play an important role in places where power grids are not well established.

Honda thinks the battery pack will provide a tailwind for its motorcycle operations because in some parts of Asia power supply remains a problem.

The company wants to have electric cars, including hybrids, account for two-thirds of its global car sales by 2030. But this will require efforts not only in development and sales of vehicles, but also of the battery pack. The company plans to test the feasibility of its power supply system and conduct pilot studies in more countries outside Japan.

Yoshiyuki Matsumoto, president of Honda R&D, thinks electric vehicles could become part of a smart grid. "We want to propose not just vehicles but an entire ecosystem," he said.