India's InMobi ramps up ad challenge to Google and Facebook

BANGALORE -- Low-profile Indian tech company InMobi aims to take advantage of the headwinds facing Google and Facebook to grab a bigger share of the nearly $140 billion market for online advertising.

The Bangalore-based company, which brings together advertisers and app developers, has already teamed up with or received investment from the likes of SoftBank Group, Microsoft and Xiaomi. As a result, InMobi is now a particularly rare breed of unicorn -- an Indian startup valued at more than $1 billion while focused primarily on overseas markets, namely the U.S. and China. It is also prowling overseas for acquisitions, last year picking up two specialized mobile ad services companies in the U.S.

"We are now looking to build at a much larger scale and become one of the top five enterprises in the advertising and marketing segment," co-founder Naveen Tewari told the Nikkei Asian Review in a recent interview. "Our ambitions have grown almost 10 times in the last five years."

Facebook and Google, meanwhile -- which together control as much as 80% of the market, by one estimate -- are facing new scrutiny from regulators, particularly in Europe. This has already resulted in fines for data and privacy breaches and observers say more may be on the way.

InMobi initially pursued a number other business lines after its founding in 2007, including text messaging-powered search services and mobile payments, before latching onto mobile ads just as smartphones and apps started to take off.

InMobi's systems match up advertisers and app owners. App owners without the scale or inclination to maintain their own mobile ad sales teams can offer access to their users to advertisers through companies like InMobi.

The potential to precisely target marketing messages within apps in various combinations of text, video and interactive displays and to get immediate feedback on their campaigns' effectiveness is commanding advertisers' attention. Marketing research company WARC estimated last month that advertisers spent $137.9 billion on mobile ads in 2018, with the category's tally set to overtake that of television advertising this year. 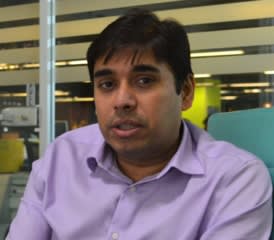 InMobi is hardly alone in seeking to offer an alternative to the powerful ad networks controlled by Google and Facebook, which control 75-80% of the global market according to an estimate by Sanchit Vir Gogia, chief executive of Indian technology analysis company Greyhound Research. InMobi, however, has picked up more momentum than most of its rivals.

Mobvista, a mobile ad platform company based in Guangzhou, China, raised 1.28 billion Hong Kong dollars ($153 million) in a stock offering in December in Hong Kong. It described itself as the second-largest Asia-based platform and said it was reaching 903.6 million devices each day in its prospectus. An accompanying chart ranked Mobvista's network as the 10th largest in the world, behind seven unnamed U.S. players, one from Israel at No. 6 and one from India at No. 7, implicitly InMobi.

InMobi claims it has a network of more than 1.64 billion device screens worldwide and says it is putting ads in front of consumers 200 billion times each month. It lists Samsung Electronics, Adidas, Audi and Netflix among its clients.

Its initial backers included U.S. venture capital firms Kleiner Perkins and Sherpalo Ventures, both early investors in Google. SoftBank injected a total of $200 million over the course of 2011 and 2012. Its latest annual report listed InMobi as an associate company, indicating it held a 45% voting interest and had committed $359 million in capital to it.

According to filings with the Indian Ministry of Corporate Affairs, InMobi posted a loss of 355.11 million rupees ($5 million) on revenue of 3.22 billion rupees in the fiscal year ended March 2018. The company's valuation as of last month was $1 billion, according to technology finance research company CB Insights.

From early on, InMobi has been focused on markets beyond India. Tewari said: "It was one of those decisions when we were just 15 people. We realized we have to build this company in a global way because it's not going to be successful only in India."

Yet InMobi's early efforts in China did not go smoothly. "We realized that maybe we were not doing it right," Tewari said. "We had sent a lot of people from India who were trying to do business there and that didn't work."

"We realized that if you have to be in China, you can succeed only if you are Chinese and do business like a Chinese company," he said. Once InMobi recruited local managers, the business "took off."

"We're growing very well and it's a big market for us," he said. The company has had some help in China, tying up in 2015 with TalkingData, a local company which provides data analysis services for app developers, and in 2017 with phone maker Xiaomi to bring its in-house apps into InMobi's network.

InMobi now gets about a quarter of its revenue from China, around half as much as it gets from the U.S.

In the latter market, it formed a tie-up last June with Microsoft. Under their pact, InMobi is shifting its services to the U.S. company's cloud computing platform while Microsoft is promoting InMobi's marketing services to its own business customers.

A few months earlier, InMobi had bought AerServ, a California-based mobile advertising service company focused on video, for $90 million. In October, Sprint, the U.S. mobile operator controlled by SoftBank, agreed to sell its in-house mobile ad services company Pinsight Media to InMobi for an unannounced number of shares of stock. Inmobi previously made six small acquisitions in the U.S. and U.K.

It has not been all smooth sailing, however. The company in 2016 agreed to pay nearly $1 million to settle U.S. Federal Trade Commission allegations that it had tracked the whereabouts of millions of phone users without their knowledge or consent to provide location-based ads. Tewari declined to discuss the episode beyond saying that the company had learned from it.

So what's next for InMobi? More alliances like those with Microsoft and Xiaomi, Tewari hinted, as InMobi quietly patches together a network to rival that of Google and Facebook. "I think we are a technology powerhouse," he said. "We want to be the largest advertising platform in the future."