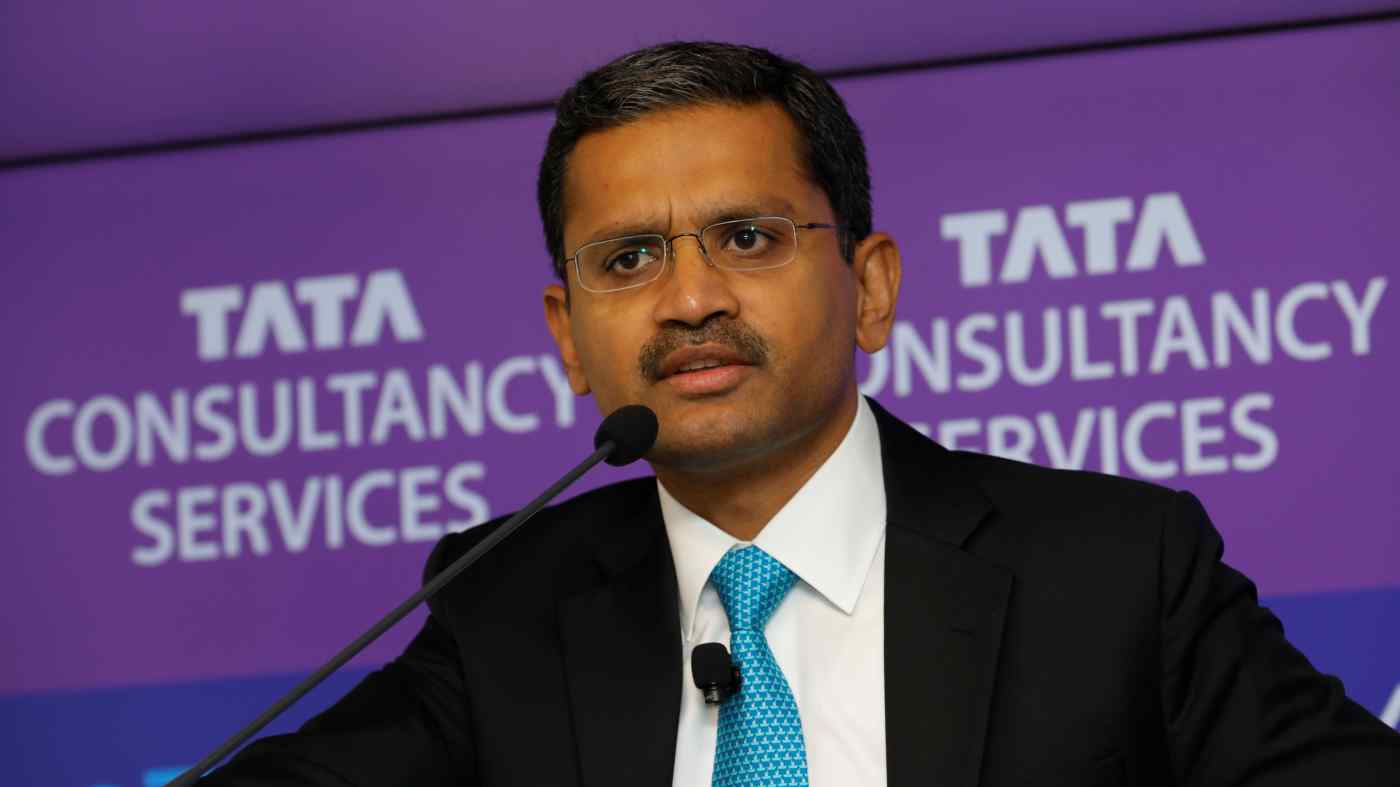 Rajesh Gopinathan, CEO of TCS, said on Monday that the IT services company's investments over the last decade in building newer capabilities, and in research and innovation, positioned it well for multi-year opportunities ahead.   © Reuters
ROSEMARY MARANDI, Contributing writerApril 13, 2021 21:02 JST | India
CopyCopied

MUMBAI -- Shares in India's largest IT services exporter, Tata Consultancy Services, declined by 4% on Tuesday, despite having announced on Monday that profit edged up in the year ended March, indicating a gap between the high expectations in the stock market for the company and its actual performance.

The company reported a 0.26% rise in annual profit after taxes to 325.62 billion rupees ($4.3 billion), thanks to a strong gain in the January-March quarter. Full-year total revenue grew 3.72% to 1.67 trillion rupees, helped by a strong order book from international clients, especially in banking, financial services and insurance.

TCS is the first Indian information technology company to announce its full-year results, and its performance is seen as a bellwether for the earnings of its peers in the sector, such as Infosys Technologies, Wipro and HCL Technologies.

"Our investments over the last decade in building newer capabilities, and in research and innovation, position us well for the multi-year technology services opportunity ahead," TCS Managing Director and CEO Rajesh Gopinathan said in a statement. "TCS was expected to deliver a strong set of numbers. To that extent, it was in line [with expectations]," Apurva Prasad, research analyst at HDFC Securities, told Nikkei Asia. "On an absolute basis, the results are strong," he said, but that their relationship to the higher market expectations could explain the share price fall.

Shares of peers in the sector also tumbled on Tuesday. Infosys, HCL Technologies and Wipro were all down between 2% and 4%. TCS' financial results may have served to raise awareness of the gap between the high expectations held by the market and the reality.

Market watchers have been expecting Indian IT companies to announce strong quarterly and annual earnings, given the accelerated adoption of digital technology by businesses around the world, partly in response to the coronavirus pandemic.

Expansion of recent deals, new orders and digital transformation investments are expected to drive revenue growth for IT companies for the most recent quarter, brokerage Prabhudas Lilladher said in a note. A favorable exchange rate is also expected to add 50 to 120 basis points to their dollar-denominated revenue growth, with TCS and Infosys leading the pack, it said.

Indian IT companies see big tech orders as a multiyear tailwind, with the transformation they had expected over the next three to five years completed in as little as two years, as companies move workers online. This comes after a lull during the peak of COVID-19 lockdowns worldwide last March. Amid this transformation, IT companies have been able to retain their price bargaining power. The performance of India's software services export sector has been reflected in the stock prices, with the industry outperforming the broader market. In the month to April 12, just before TCS announced its financial results, its shares rose 6.5%, while shares in Infosys have climbed 3.3% on the Bombay Stock Exchange, compared with a more than 2% fall in the Sensex index during the period.