Intel races to defend US chip leadership from Asian rivals TAIPEI -- Intel has released a new line of laptop CPUs that it hopes will drive revenue growth into 2021, but the company is struggling to maintain its -- and America's -- leadership in chip manufacturing against Asian rivals.

Intel is the biggest U.S. chip company by revenue and the only American microprocessor maker that still produces its own advanced designs domestically, but it has struggled with production issues and lengthy delays in recent years.

The company is set to release its latest chipset, code named Tiger Lake, on Wednesday. It will be Intel's second central processing unit for notebook computers using its 10-nanometer process technology, the most advanced by a U.S. company.

Intel's latest laptop CPU platform is faster and much more powerful in terms of computing and graphics processing than the latest offerings this year by smaller U.S. rivals Advanced Micro Devices and Nvidia, said Ksenia Chistyakova, product marketing engineer for AI and Media, at a news conference on Wednesday.

Intel said customers will start to see its 10-nanometer chipsets in cloud servers and desktop PCs only toward the end of 2020 and 2021, respectively. These two applications, which both require powerful processing capabilities, are the foundations of the U.S. chip maker's business.

But while the company is pinning high hopes on Tiger Lake, the fact remains that the company was supposed to introduce 10-nanometer chip technology in 2016. Issues with production quality led to multiple delays and even an yearslong, industry-wide shortage of CPUs for personal computers.

The launch of the new notebook processor, moreover, comes a month after Intel admitted it was facing another major delay in the next generation of its chipmaking technology. The company now aims to roll out its 7-nanometer process technology some time in 2022 to 2023.

The nanometer size refers to the line width between transistors on a chip. The smaller the number, the more cutting-edge and powerful are the chips, and thus more challenging to develop and produce. Asian rivals Samsung Electronics and Taiwan Semiconductor Manufacturing Co. are already producing 7- and 5-nanometer chips.

Intel is still the world's biggest maker of microprocessors for PCs and servers, and has long been at the forefront of the global chip industry. Its ability to squeeze ever more transistors onto a chip has been a key factor in decades of American leadership in semiconductor manufacturing.

Intel credits its leadership to its "in-house" philosophy of designing and manufacturing all of its chips itself. The recent spate of delays, however, has exposed the shortcomings of this approach and opened the company up to challenges from AMD and Nvidia. Unlike Intel, AMD and Nvidia outsource their most advanced chip production to Asian companies, including TSMC and Samsung.

AMD's most advanced microchip offerings this year, for example, are all based on TSMC's 7 nanometer process technology, and AMD CEO Lisa Su said the company will adopt TSMC's 5 nanometer tech in 2021. Apple, a longtime Intel customer, has also announced it will switch from Intel chips for Mac computers to its own in-house designed processors as early as this year, with production outsourced to TSMC. 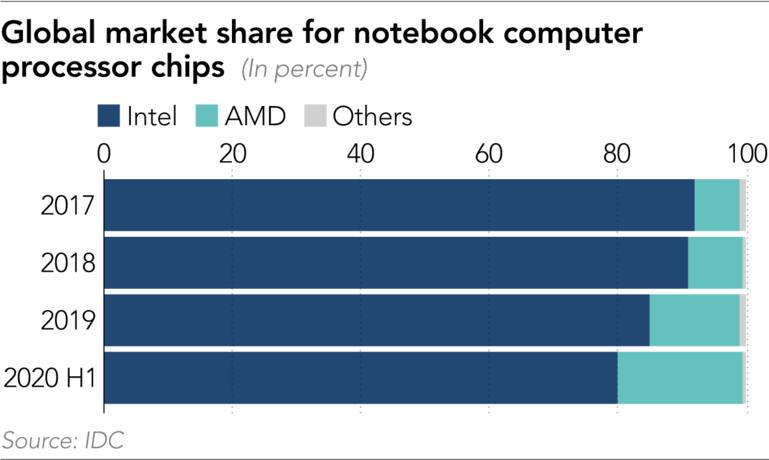 Two other renowned American chip design and manufacturing powerhouses -- Texas Instruments and Analog Devices -- also outsource their more advanced chip manufacturing needs to TSMC to improve operational efficiency and reduce spending on building chip facilities. With AMD and Nvidia also outsourcing such production, Intel is the last hope for the U.S. to maintain its own advanced chip-production capacity.

The chip industry has become a key battle ground in the tech cold war between Beijing and Washington. Semiconductor components function as the brains of almost every type of electronic device, making their design and manufacture an issue of national security. In June, a bipartisan group of U.S. lawmakers introduced a bill to offer nearly $23 billion to support semiconductor factories in the U.S. to counter the rising Chinese chip industry and maintain America's leading position.

Intel's headwinds, however, look set to continue. In July, the company acknowledged for the first time that it needed to seek a "contingency plan" to outsource some chips as it attempts to solve its own production technical issues.

Intel had 92% of market share in processor chips for notebook computers in 2017, roughly the time the American chip giant started to face delays in its 10-nanometer technology, while AMD had just 7%, according to research company IDC. But for the first half of 2020, Intel's market share in global laptop processors had fallen to 80%, while AMD reached nearly 20%.

Joey Yen, an veteran tech analyst with IDC, said Intel's delay in rolling out the latest technologies and supply constraints over the past two years contributed to AMD's rapid rise in market share.

"All the computer builders -- from HP and Dell to Lenovo and Asus -- have to seek alternatives as their longtime top choice of Intel processor chips face some technical issues. ... So they need to design computer products based on Intel rival AMD's processors, even if they previously thought that AMD's systems are not as stable as Intel's," said Yen. "Whether AMD could continue to maintain or take more market share is, after all, dependent on its own processors' performance as well as whether Intel could manage to reclaim the glory of chip manufacturing leadership."

Intel said the latest Tiger Lake laptop CPU offers breakthroughs in computing performance as well as graphics and artificial intelligence processing power, and expects it to be the company's key growth driver for 2020. It also said at least 50 models of notebook computers powered by the chip will be available for the holiday season this year.

Meanwhile TSMC -- the worlds biggest contract chipmaker whose clients include Apple, Huawei and Qualcomm -- is attempting to consolidate its lead in chip manufacturing. The company has already mass-produced chips using 5-nanometer technology, which will be used in Apple's upcoming flagship iPhone processors, and in late August it confirmed that it is building a new research and development center for 2-nanometer technology and beyond. The center will house an engineering workforce of 8,000 and is slated to go into operation by 2021, though the company has not provided a timeframe for testing or mass producing such advanced chips.

C.Y. Yao, a chip analyst with TrendForce, said although Intel faces some delays for its advanced chip technology, Intel and other American semiconductor manufacturing companies, such as Texas Instruments, Analog Devices and Micron, still hold a strategic and competitive position in the global chip industry.

"The U.S. chip industry has built a deeper and stronger technological foundation in decades compared with the chip players in Europe, Japan and Taiwan. And they have developed in a balanced way both leading chip manufacturers and chip designers," Yao told Nikkei.

He added, however, that the U.S. cannot afford to "let its guard down regarding its chip industry in times like these, especially since elevating the importance of the chip manufacturing sector could create job opportunities -- a key element that the Trump administration is always keen to boast about during the [presidential] campaign."