TOKYO -- Alibaba Group Holding founder Jack Ma warned companies about raising too much money during a discussion with SoftBank Group CEO Masayoshi Son, who vowed to double down with another $100 billion Vision Fund.

"Nobody, no company can live on shareholders," Ma said during the talk, held on Friday at the University of Tokyo.

He criticized startups for designing business models that appeal to investors. "If your investors don't believe in what you are fighting for ... you are tricking them [for money]," he said. "We can discuss, we can modify [the business plan] but I can never make a plan that you like. Most people go to venture capital and investors and design what [they] want. That's no good."

Son in 2000 invested $20 million in Ma's then-nascent startup. That stake is worth more than $130 billion today and has become the financial blanket enabling the massive bets Son places via the $100 billion Vision Fund.

Ma recalled that he was not looking for an investment when he met Son because he had raised $5 million two months earlier. But Son insisted on investing $50 million. After discussing the matter with Joe Tsai, his chief financial officer at the time, he agreed to take a $20 million investment from Son.

Of his decision to invest, Son said, "I could smell him. ... We are the same animal. We are both a little crazy."

Ma, who famously told Wall Street "customers first, employees second, investors third" when Alibaba went public in New York in 2014, added that a company's "most important product is its employees." 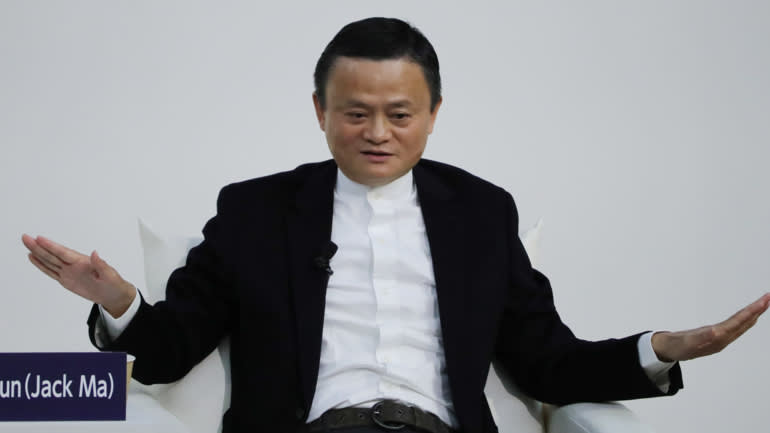 Ma said, "Nobody, no company can live on shareholders." (Photo by Ken Kobayashi)

"You don't make mistakes when you don't have money," he said. "When you have too much money, you make a lot of mistakes."

Son said having a strong passion to change the world will ultimately be well-funded. "If you chase money, the money escapes," he said. "But if we chase the dream, money chases us."

He vowed to double down on the Vision Fund, which he said has already deployed nearly $90 billion in late-stage ventures around the world. Son's decisions on behalf of the Vision Fund are coming under scrutiny due to the heavy losses that were suffered from investments in U.S. office sharing company WeWork.

"I am now preparing for fund 2," Son said. "I will invest on the same kind of scale. With the coming AI revolution, this time I have prepared enough money to make significant changes, helping young entrepreneurs."

SoftBank's mobile arm on Friday announced that it will open an AI lab with the University of Tokyo. SoftBank said it will invest 20 billion yen ($184 million) to support researchers and students.

Son said that diving deep into new technology is "great fun for me. ... It's almost like a hobby."

Both Son and Ma agreed that artificial intelligence will transform society. "At least 50% of the jobs that we have today will be replaced," Ma said. "It's scary but exciting."

Son said more than 90% of jobs in Japan used to be farming. Now a tiny fraction of the country's population is made up of farmers. "Did we all lose jobs?" Son asked. "No, we created new jobs."