TOKYO -- The University of Tokyo and the Tokyo Institute of Technology (Tokyo Tech) took a step closer to the realization of green chemistry by successfully conducting chemical synthesis in water to make raw materials for drugs and plastics. 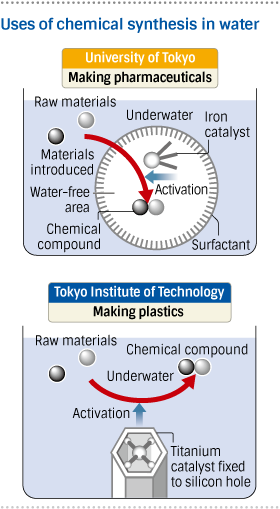 Green chemistry is a chemical synthesis technology friendly to the environment and humans. The technology was created based on the lessons learned from the 20th century when the chemical industry focused on cheap mass production, which resulted in serious pollution problems.

R&D for green chemistry focuses on reducing environmental impact in processes from manufacturing and use to disposal of chemical substances. The technology is also called green sustainable chemistry with the goal of realizing a sustainable society.

Many raw materials for drugs and plastics are insoluble in water. So they are usually synthesized after being dissolved in organic solvents, such as toluene and chloroform, or acids.

Many of the solvents are harmful, so liquid waste needs to be carefully disposed of. Also, many catalysts, which promote chemical reactions, do not function in contact with water, making chemical synthesis difficult in water.

On the other hand, chemical synthesis in water does not require the use of harmful organic solvents and acids. So if the technology were applied to industry, liquid waste disposal would be unnecessary and companies could improve their competitiveness by cutting production costs.

A group of researchers led by Shu Kobayashi, a professor at the University of Tokyo, confirmed asymmetric synthesis, in which only effective medical ingredients can be created in water with an iron oxide catalyst.

The group used a surfactant with two separate parts -- one that mixes with water and the other with oil -- and combined the surfactant's molecules with iron oxide.

In this chemical synthesis, a maximum of almost 100% of raw materials became desired components. The group plans to upgrade the catalyst for repeated use.

Another group of researchers led by Michikazu Hara, a professor at Tokyo Tech, used the chemical synthesis technology in making plastic. They fixed a titanium catalyst to silicon oxide with many holes to enable the catalyst to function well without being disturbed by water molecules.

They tested the substance in water mixed with sugar extracted from a plant, and made lactic acid, an ingredient of biodegradable plastic. The efficiency of the experimental process was 89%, on par with existing technology. They noted that because the catalyst is insoluble in water, it can be reused after being isolated from the water.

The technologies developed by the universities also have the advantage of using inexpensive catalysts, such as iron and titanium oxide.