Cybersecurity consultants in Japan earn less than their counterparts in some other Asian countries. (Photo provided by Fujitsu)

Data scientists in Japan earn up to $109,000 a year, compared with about $146,000 in mainland China, according to Hays Specialist Recruitment Japan, which based its figures on job changes it brokered in 2018 and 2019.

Such cases provide a glimpse of the competition Japanese companies face from Asian peers in hiring talent in international, technology-driven fields.

"Corporate culture in Japan needs to change to one that values skills and experience, rather than seniority," said Michael Craven, U.K.-based Hays' regional director for Japan.

Pay gaps are evident in other tech jobs. Cybersecurity consultants -- a shortage of which has become more acute ahead of this year's Tokyo Olympics -- earn less in Japan than in some other Asian markets.

Their pay tops out at about $118,000 in Japan, higher than in mainland China but well below the $153,000 salary they command in Hong Kong, according to Hays. 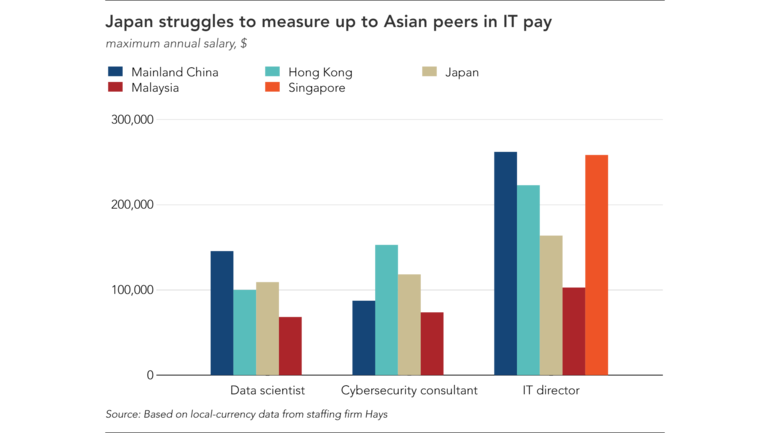 Of the five Asian markets in the survey, Japan consistently outperformed only Malaysia in these three job categories. Japan ranked as the second worst out of 34 countries and territories in the ease of hiring highly skilled business people, according to a joint study by Hays and Oxford Economics.

Few companies have embraced the high pay needed to attract talent, although some, such as Mitsubishi UFJ Financial Group, are starting to break with tradition in hiring and compensation practices.

Wide pay gaps are also evident in manufacturing, long seen as a Japanese national strength. At automakers, research-and-development chiefs in mainland China can earn close to $545,000 a year. In Japan, their pay tops out closer to $318,000. The difference is linked to the growing demand for engineers to develop electric vehicles in China.

R&D chiefs in pharmaceuticals earn more in mainland China and Hong Kong than in Japan.

Wage increases tend to be smaller in Japan than in China, Hays found. Raises of less than 3% accounted for 48% of the total in Japan, with no raise at all in 21% of cases. By contrast, 42% of raises in China were in the range of 3% to 6%. Pay remained flat only 12% of the time.

The scramble for IT talent is not bound by national borders. According to staffing company Robert Walters Japan, job offers outnumbered candidates for midcareer hires in artificial intelligence-related positions by 6 to 10 times. More non-Japanese candidates are being hired in Japan for such positions, as well as holders of advanced degrees who have no business experience.