Japan developing the smart, networked operating room of the future TOKYO -- A huge display is mounted on a wall. A number of other displays hang from the ceiling. Two robotic machines squat on the floor. OLED lights bathe the entire room in soft illumination.

If it were not for the surgeon, scalpel in hand, you might think it was an amusement park attraction or a state-of-the-art movie theater.

It is the latest prototype of the surgical care unit of the future, the Smart Cyber Operating Theater, or SCOT.

The public got a chance to see SCOT on June 16 at Tokyo Women's Medical University.

Developed by the Japan Agency for Medical Research and Development in collaboration with Tokyo Women's Medical University and Hiroshima University, SCOT is a smart, networked, surgical theater. It is meant to be a complete package, equipped with the medical instruments to provide all of the features and play all the roles required in the operating room.

The networking and integration depend on something called the OPeLiNK system.

The objective behind SCOT is to improve the precision and safety of surgery by collecting and integrating all sorts of information, including basic data from medical instruments, intraoperative images captured during surgery, positional data from the surgical tools, and biological information from the patient.

Immediate access to all this information provides the means to keep track of both the course of a surgery and the status of the patient, to direct or navigate the surgery, and to monitor the working status of the equipment.

In addition, all this information can be stored in a database and used later for correlative analysis if things go wrong.

The so-called Hyper SCOT prototype at Tokyo Women's Medical University is an example of what the system's developers are pursuing as their ultimate goal: a networked system that not only collects and visualizes information, or input, but also supports operations, the output, with the help of robotics.

The plan is to finish testing by March 2019, then put Hyper SCOT into use that summer.

Hyper SCOT is expected to be first used in neurosurgery procedures, such as removing malignant brain tumors.

A Hyper SCOT unit integrates around 20 kinds of equipment, including approved medical instruments and nonmedical equipment like information devices. This surgeon's cockpit supports the arms to improve steadiness and reduce fatigue.

An apparatus dubbed the Surgical Strategy Desk integrates and displays the data fed from all the information devices on a large wall monitor.

Capable of integrating data from different makes of equipment, this apparatus shows and records the state of use of a variety of devices in a temporally synchronized format. The surgical team can look at the wall display to view information from the neurological function monitor, the rapid diagnosis flow cytometer, various biological information monitors, a video feed of the operative field, intraoperative MRI imaging, the electrocautery scalpel and a robotic machine called a surgeon's cockpit.

Visualizing all of the various surgical processes this way "is like taking a dictionary with you to a foreign-language exam," said project leader Yoshihiro Muragaki of the Tokyo Women's Medical University Institute of Advanced Biomedical Engineering and Science.

In a Hyper SCOT unit, biopsies of tumor masses can be quickly profiled for malignancy using the flow cytometer, and the results superimposed on the MRI images in the form of numerical data. The surgeon can also view information about myopotentials, the electric signals generated by skeletal muscles, to assess the risk of paralysis and other post-surgery effects. The surgeon can take in all the information in deciding which tumors to excise and to what extent.

By also displaying the path of the electrocautery scalpel, "the surgeon can get feedback in real time, rather than waiting until afterward to reflect on how things went," Muragaki said.

The first, mentioned above, is a kind of surgeon's cockpit that supports the arms and wrists so the hands are steadier and the arms tire less readily.

Based on the intelligent arm-support robot iArmS, developed by project collaborator Denso, this cockpit supports both arms and can be used by a surgeon who is either standing or sitting. 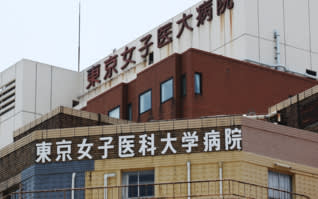 The other robot is a robotic operating table, developed by a group spearheaded by Medicaroid, a joint venture of Sysmex and Kawasaki Heavy Industries.

This table can automatically ferry a patient into the gantry of an MRI machine and then back to the original position after imaging is completed.

These two robots lend support to a main Hyper SCOT feature, which is that "the diseased part is always positioned in the center of the room," Muragaki said.

This way, the surgeon's actions are always centered.

The Hyper SCOT unit is illuminated by organic light-emitting diodes that can also be used as a tool to, say, convey information to the surgeon about risks. This can be done with flashes of certain colors.

In addition, Hyper SCOTs are to be linked to a separate Surgical Strategy Desk elsewhere in a hospital for real-time information sharing.

An experienced surgeon could sit at this apparatus and use it like a control tower to monitor the surgery. In addition to the real-time feed from the surgical room, this guide will be able to access video replays of any part of the procedure.

In the future, the Hyper SCOT prototype will be connected to new kinds of medical instrumentation. One example is a device for focused ultrasound therapy, a minimally invasive cancer treatment.

Some of the new medical instruments will be developed as part of projects undertaken by the Japan Agency for Medical Research and Development. "We want to connect SCOT to new therapeutic techniques that have been developed here in Japan," Muragaki said.

The goal, he said, is to make surgical care an export industry.