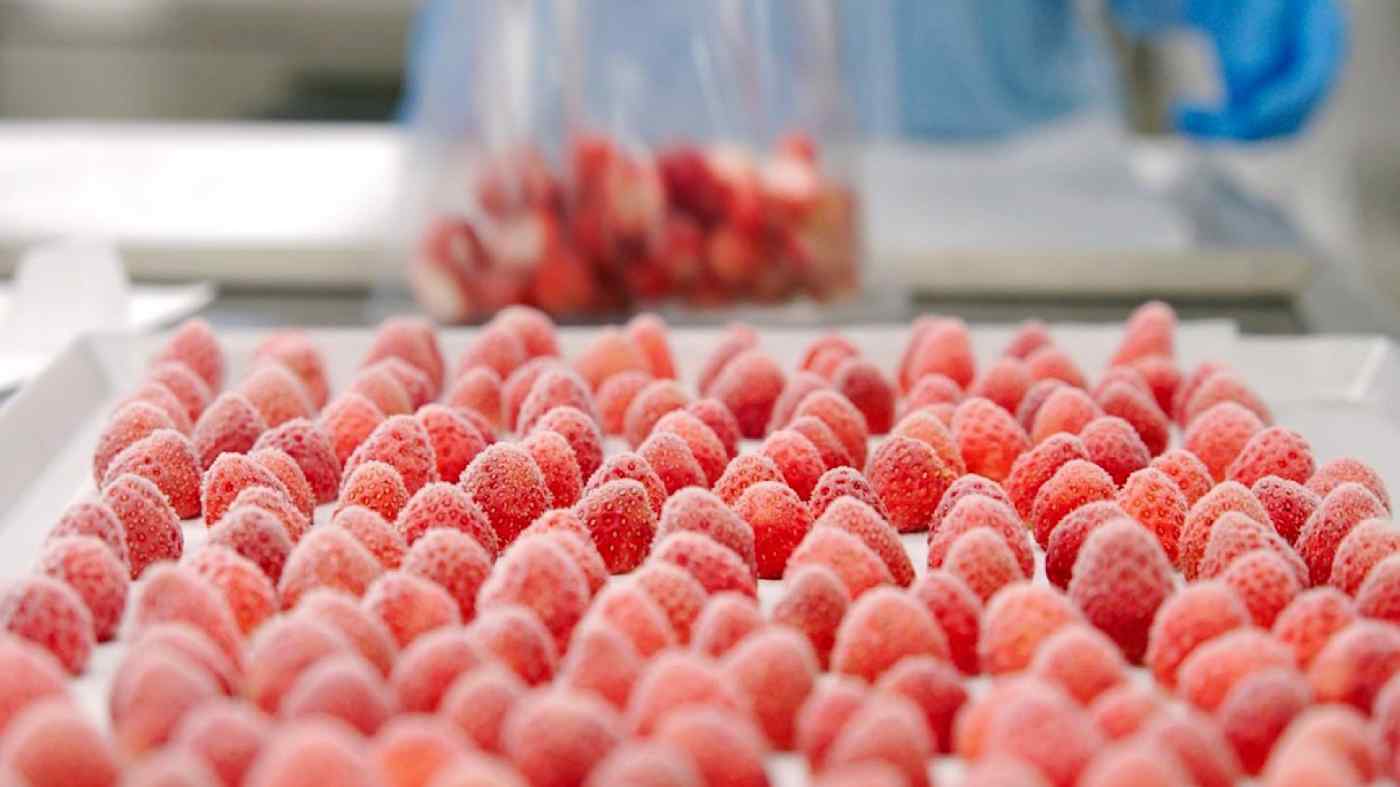 Maintaining the flavor and texture of fresh fruit has always been one of the primary goals of evolving refrigeration technology.
JUNYA HENMI, Nikkei staff writerOctober 31, 2020 14:00 JST | Japan
CopyCopied

But no pleasant aroma of freshly baked loaves emanates from the shop. All of its products are frozen, supplied by local bakeries from across Japan. As the shop's website explains: "We have selected the best bread from 10,000 bakeries nationwide."

The store is operated by Pan for You, a frozen bread startup based in Gunma Prefecture. "Pan" is Japanese for bread, a derivative of the French "pain."

In addition to in-shop sales, the company offers a fixed-rate subscription service dubbed "pansuku," in which subscribers receive several different types of frozen bread delivered each month by Japan Post.

Pan for You has done much to burnish the oft-tarnished image of frozen bread. Far from the limp offerings of frozen pizzas found in supermarkets, its croissant, for example, exhibits crispy outer layers and soft, buttery inner layers when allowed to thaw at room temperature.

Its bagels explode with a tantalizing aroma of bread and sesame the moment the package is torn open.

The superb quality of the company's bread comes from its special packaging, which was developed in partnership with a package manufacturer specifically to enclose frozen bread. The material inhibits oxidation -- the main culprit in food spoilage -- by preventing oxygen from entering while retaining moisture within the bread.

Freezing bread causes a loss of moisture, leaving it dry and crumbly when thawed. Frozen bread also sheds its sweet aroma and flavor over time. Pan for You's packaging minimizes this.

"We have no competition in the home-delivery market for frozen bread, even overseas," Pan for You President Kenta Yano told Nikkei. The company has been thinking about overseas expansion, a move that could catapult it into the global food delivery market.

The frozen food business has a century-long history in Japan, giving it a solid foundation to prosper from the exigencies of the pandemic, which has forced increasing numbers of people to eat and work at home. A raft of frozen food services and related products has emerged to cater to their needs, ranging from home delivery to machines that freeze food more efficiently. Domestic sales of frozen foods are expected to hit an all-time high in 2020.

At a fruit processing plant in Toyooka, a village in southern Nagano Prefecture, workers use knives to peel fruits -- apples, pears, strawberries and grapes -- and remove imperfections before cutting them into small, bite-size pieces. They are then rapidly frozen to minus 30-35 C in two quick-freezers that blow cold air from all directions.

Quick-frozen strawberries have many thin white ice crystals on their surfaces.

Frozen fruits tend to lose their taste, texture and color over time. But the plant's quick-frozen fruits can be stored for more than three years without an appreciable loss in quality, retaining crispness and taste after thawing.

The plant, which started full-scale operation earlier in October, is run by Minami Shinshu Creation, a local startup that launched in April. The business was set up by its president, Takayuki Maeda, who moved to the village as part of a local government program to recruit people who can help stimulate the economy. The company produces high-quality cut fruits thanks to the support of Day Break, a Tokyo-based company that sells commercial specialty freezers.

Day Break helps clients use its freezers for different products, as the same unit can be adjusted to perform differently depending on the product. 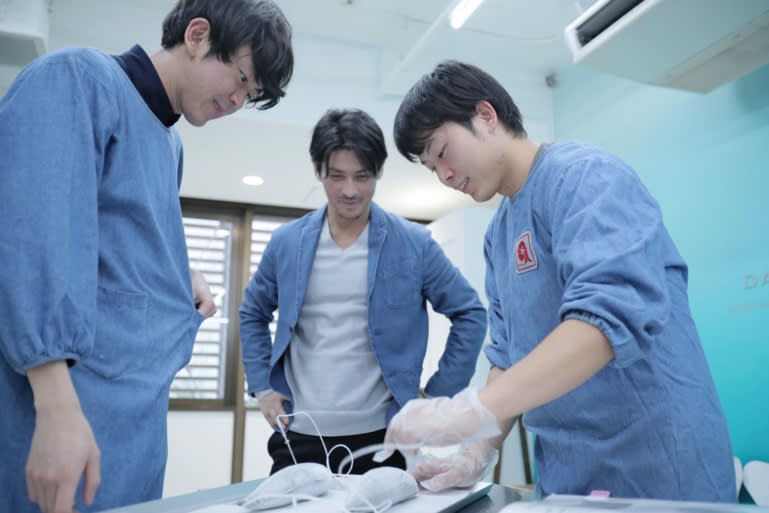 Making quality, quick-frozen cut fruit requires a carefully designed process that starts in the preparation stage before freezing. Ripe fruits must be cut into the proper sizes quickly so they can be frozen in an optimal state for long-term storage, according to Day Break President Masayuki Kinoshita.

The outcome of quick freezing, which can reduce product temperatures to as low as minus 35 C, depends on the duration of the process, the way products are arranged, and other variables. Freezing time varies between fruit due to differences in water content. Trying to freeze too much at one time can result in fruit not being frozen hard to its core.

The color and taste of fruit held in cold storage can degrade unless the temperature is properly maintained and products are properly packaged. "Even freezer manufacturers don't have precise quality-control expertise for each fruit," says Kinoshita.

Before he founded Day Break in 2013, Kinoshita had a mind-blowing taste experience in Thailand after eating fresh fruit from a street vendor. He became consumed with trying to figure out how to import the fruit into Japan without losing its taste. He was also troubled by the fact that Thai's discarded huge amounts of fresh fruit. This prompted Kinoshita to learn about freezing and thawing food.

Freezer manufacturers and other related businesses are racing to ramp up pandemic-induced sales.

Food makers generally use tunnel freezers, in which a product travels along a conveyor belt through a long tunnel that blasts cold air at minus 35 C to quick-freeze products.

Takahashi Galilei is the largest manufacturer of this type of freezer and has trademarked the name Tunnel Freezer. Its unit can freeze many types of products but requires a large installation space.

The company has come up with a smaller version, which blows cold air at 18 meters per second from the previous 5-6 mps to achieve a deep freeze. The design was also changed so that air is blown from the top and bottom simultaneously.

These improvements have doubled the freezing speed, thereby reducing the machine's footprint by about half. "Many food makers are looking for smaller freezers that can be installed in available space," says Yuji Yamamori, a business manager at Takahashi Galilei. As demand for frozen food grows, many makers of chilled food are vetting plans to introduce these and other freezers.

But it is not only about size. Mitsubishi Heavy Industries Air-Conditioning & Refrigeration displayed a compact refrigeration system that uses natural refrigerants.

The new system, which resembles a small garden shed, uses carbon dioxide and ammonia as refrigerants to reduce environmental impact. Its footprint is 31% smaller than that of the company's other models and weighs about 3 tons, or 27% less than current models. The system can be lifted into a factory using a freight elevator, according to the company.

In Japan and Europe, chlorodifluoromethane -- a refrigerant commonly used in cold storage warehouses, refrigerators and freezers -- is being phased out in favor of low-impact natural refrigerants in response to the Montreal Protocol on Substances that Deplete the Ozone Layer. The Mitsubishi unit is targeting companies that want to renew small and midsized cold storage warehouses, according to the company.

Abi, a smallish Chiba Prefecture-based maker of freezing systems, has developed technology that the company claims will revolutionize food freezing in a bid to compete with larger players.

"The race to develop better quick freezers is over," declared Abi President Norio Owada when he debuted his company's Cells Alive System technology, touted as being able to keep the structural integrity of frozen food intact to preserve freshness, texture and flavor.

Frozen food degrades due to ice crystals that accumulate when stored in a freezer. These crystals can damage quality by causing cell walls in food to rupture.

The Cells Alive System attached to a freezer creates a magnetic field around the food, making water clusters inside the food vibrate to prevent clumping into large ice crystals.

According to the company, the system vibrates water molecules in cell tissue. This produces very tiny ice crystals, vastly minimizing the amount of ice in the frozen product to protect cell walls and membranes. Hence, when the food is thawed, there is a marked decrease in the amount of water that drains out.

Young sardines frozen several years ago using CAS technology revealed an amazing similarity to the fresh variety, and there was no sign of water draining from them.

In addition to raw fish and meat, CAS can also be used to freeze cooked foods, vegetables and fruits. Integrating CAS with existing freezers is easy and cost effective, as it only involves attaching a CAS engine.

The company has received a barrage of inquiries from businesses and restaurants, both at home and abroad.

CAS technology is also finding applications in the medical field. Kyoto University's Center for iPS Cell Research and Application, headed by Shinya Yamanaka, who won a Nobel Prize for stem cell research, is using CAS in its research in iPS cells. Under a project to upgrade the center's storage equipment led by Professor Kenji Osafune, four CAS-equipped refrigerators are slated to be installed.

A refrigerator equipped with a CAS engine can store iPS, or induced pluripotent stem, tissue without destroying cells or requiring extremely low temperatures.

The center plans to spend the next several years determining the best temperatures for storage and developing systems to thaw cells and tissue without damaging them.