TOKYO -- It is one of the nightmares of the "drone age": waves of unmanned aircraft overwhelming defenses to unleash death and destruction. An agency under Japan's Defense Ministry is making progress toward countering the threat.

It has successfully blasted drones with microwave beams.

The Acquisition, Technology & Logistics Agency, or ATLA, brought seven commercially available drones -- three medium-size devices and four small ones -- into a room shielded from ambient radio waves. Also inside the room was a prototype "high-power microwave generation system," which can be used to both detect the presence of flying objects, like a radar, and scramble their electronics.

Researchers tested the system on the seven drones. Each one hovered 10 meters away and 2.5 meters above the microwave generator. All seven failed or became uncontrollable immediately after being hit by the beam.

Three suffered communications glitches, three had sensor problems and one had a power malfunction. In other words, the system hits drones where it hurts: They need to communicate with their operators and satellite navigation systems, and they rely on sensors to maintain stable flight. 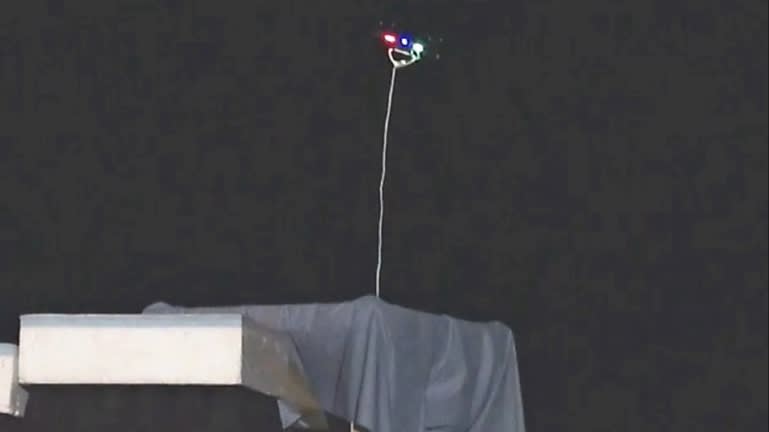 A drone hovers in the testing room before it is hit with a microwave beam. (Photo courtesy of ATLA)

None of the seven drones suffered more serious damage, such as burned circuits. "If a drone can resist an immediate fall, its electronic circuitry may be burned out due to long exposure to microwaves. But all drones [in the experiment] went down before such a consequence," said an ATLA official in charge.

The system sweeps a microwave beam 45 degrees left and right. This allows it to quickly switch targets with no mechanical adjustments. ATLA envisions installing four units on, say, a naval vessel to cover all directions and protect against attacks by multiple drones or even cruise missiles.

Other defenses against drone strikes are in the works, such as jamming signals that could render the aircraft uncontrollable. Another idea is to damage them or knock out their electronics with a high-powered laser. But these options have their limitations. To use jamming signals, a drone's radio frequency needs to be known in advance. Even without that knowledge, the microwaves can still cause glitches as long as they are strong enough; in the experiment, the system produced an electric field of 4.2 kilovolts per meter.

Lasers, meanwhile, may struggle to fend off attacks by multiple drones, as experts say it takes about two seconds to damage a craft or its circuits. The microwave system, which the researchers call an "active phased array," can cripple drones as quickly as it can change the direction of the beam.

ATLA suggests a combination of defenses is the best bet.

"If attacked by many aerial vehicles, we will shoot down as many of them as possible with microwaves and intercept the rest with other means," the official said.

When it comes to missiles, the official added that using microwaves to disable their ability to avoid interception would make counterattacks easier.