Fans attend a baseball game at Yokohoma Stadium in September. The venue is scheduled to host baseball and softball at next summer's Tokyo Olympics. (Photo by Yo Inoue)
ATSUSHI MURATA, Nikkei staff writerOctober 25, 2020 06:24 JST | Japan
CopyCopied

TOKYO -- Professional baseball games scheduled for next weekend will serve as a testing ground for higher capacity limits than permitted under current coronavirus precautions as Japan prepares to host the Summer Olympics next year.

Venues with a capacity of more than 10,000 attendees are capped at 50% in Japan. But with the approval of the government's coronavirus task force, tickets made available for three games hosted by the Yokohama DeNA BayStars from Friday through Sunday will be 80%, 90% and 100% of capacity at the 32,000-seat ballpark.

In cooperation with Kanagawa Prefecture and the city of Yokohama, electronics group NEC, telecom operator KDDI, chat app platform Line and online game maker DeNA -- the owners of the BayStars -- will conduct the field test over the three days.

The findings from Yokohama Stadium, which is a planned Olympic venue for baseball and softball, will provide insight into accommodating those attending the Summer Games.

"The viability of holding professional sporting events in Japan with large crowds would be a big boost going into the Olympics," said a government official. 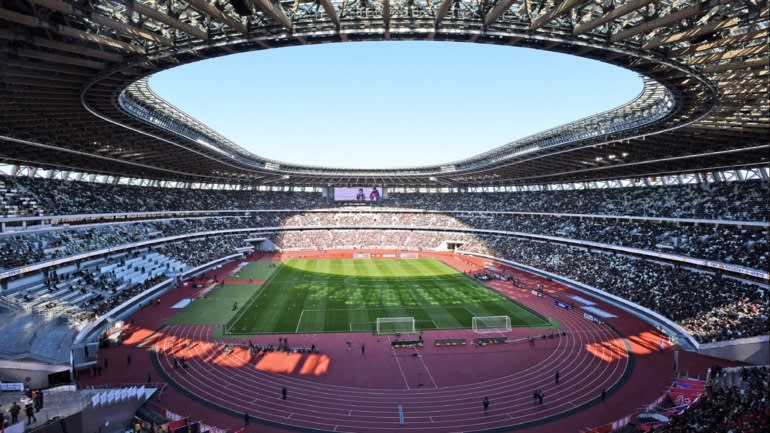 Japan's National Stadium, the main venue for the upcoming Summer Olympics, has a capacity of more than 60,000 seats. (Photo by Takaki Kashiwabara)

Thirteen high-resolution cameras will be set up in the stands, concourses and on Yokohama Stadium's perimeter to collect such data as mask usage, congestion at bathrooms and souvenir shops, and the flow of fans entering and exiting the stadium. Data from carbon dioxide monitors in the stands and wind speed gauges will go into a supercomputer to analyze the spread of aerosols and droplets from cheering.

Precautions against coronavirus transmission will make use of smartphones, with Bluetooth wireless beacons placed in several dozen locations in the stadium. This will provide fans with information on crowding at bathrooms and stores nearly in real time.

"Analyzing the data from such commonly crowded areas as the restroom and shops provides an opportunity to craft more robust countermeasures," said Koji Wada, professor at the International University of Health and Welfare in Tokyo and an expert in the field.

Other measures include staggering sections of fans entering and exiting the stadium as a way to alleviate crowding at both the ballpark and the nearby train stations.

A notification system using the Line app will be tested as well. Fans who register their seat location can be notified if a positive case turns up from a fan in a nearby seat.

Capacity restrictions are also expected to be loosened for baseball games played at the Tokyo Dome on Nov. 7-8.

"We are working on the basis there will be international spectators," International Olympic Committee President Thomas Bach said this month.

The IOC and the Japanese side are likely to determine the scale of attendance at Olympic venues based on the outcomes of these types of capacity tests as well as international competitions.