TOKYO -- Kitchen disposal units are rare in Japan, but industrial machinery maker Eiwa is hoping to change that with a contraption that promises no clogged plumbing and no mess. 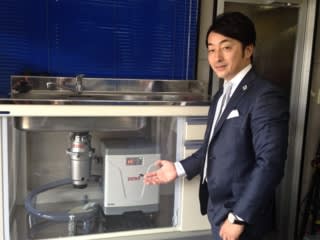 The company based in Hamamatsu, Shizuoka Prefecture, about 210km southwest of Tokyo, is promoting the Zero, which shreds food into tiny pieces, then sends them into a drum. After they are spun around and devoured by microbes for a few hours, the only thing left of the day's table scraps is water and carbon dioxide.

The average Japanese kitchen produces about 700 grams of rubbish a day, or 30-40% of all domestic waste, creating a significant environmental burden. Eiwa's disposal can handle around 1.5kg of trash daily -- breaking down just about everything, from eggshells and corn sheaths to bones. The device measures 42.4cm high, 31.6cm wide and 43.6cm deep. It weighs about 10kg.

Japan's big home appliance makers sell kitchen waste machines, too, but they have not gained much traction with consumers.

Only about 28,700 households in Japan had such devices as of the fiscal year through March 2012, according to an official of the Food Waste Processing System Association. People worry about kitchen waste blocking their pipes, which are typically narrower than those in the U.S. and other countries where disposals are more common. Devices currently on the market that use microorganisms only manage to turn garbage into compost, which must still be emptied out.

Eiwa set out to create a device in which microbes gobble up everything. Researchers at the company partnered with a university in Japan's northeastern Tohoku region. They came up with the idea of using a microbe that normally lives in soil and has a taste for kitchen grease. Eiwa had found its magic bug.

The next step was to create a container that would keep the microbes alive and make full use of their powers of decomposition. The team tried a variety of materials and shapes, eventually settling on a resin ball. Grooves in the container maximize its surface area, letting the microbes work more effectively.

To speed up decomposition, the researchers placed several hundred of the balls into the metal mesh of the Zero's rotating drum. The optimal cycle turned out to be two minutes of slow turning, then four minutes letting the goop sit.